It's the Final countdown for Big Deal singing duo 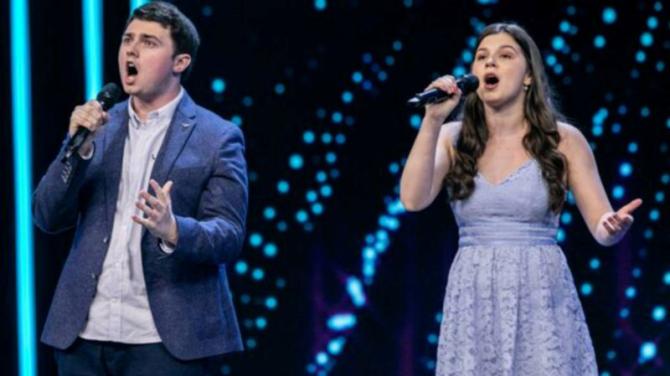 ANTRIM’s singing sweethearts Bello Duo have made it through to the final of Irish talent show The Big Deal.

The judging panel - made up of pop duo Jedward, Aston Merrygold, music legend Boy George, Deridre O'Kane and Lyra - saw six acts battle it out for their place in the final.

The acts were paired up and went head-to-head with the judges then deciding which was their favourite - with only one going through to the next round.

However all five judges voted for local couple Victoria McClements and Conor Taggart, who performed an amazing version of Come What May.

The acts that successfully made it through this round will join aerial pole dancer Lisette Krol, Irish dancing duo The Gardiner brothers, and singer Martin McDonnell in the final.

The couple announced: “WOW, what an experience! Five votes and straight through to the FINAL!

“Come What May is one of our favourite songs to sing together so to perform it on the 3 Arena stage in front of the judges was just incredible.”

Bello Duo were already flying high after featuring on the Irish version of hit TV show Gogglebox and they have alsop announced a theatre tour of venues across the island.

Speaking of their appearance on Gogglebox, where TV viewers commentate on what they are watching, Bello Duo said: “We can confirm that we are definitely not related but we can’t deny the fact that we probably have sang A Whole New World to each other over the spaghetti bolognese!”