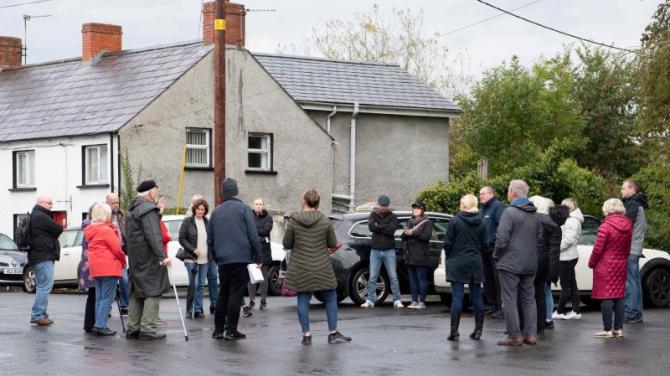 RESIDENTS of the historic Riverside area - as well as people living in The Cedars and Moylena Grove - have teamed up with councillors to object against plans for 20 new dwellings in the area.

Residents and other concerned individuals met with local Councillors Jim Montgomery and Leah Smyth of the UUP and Neil Kelly from Alliance on Saturday to discuss proposed plans to develop 20 dwellings on the currently derelict site of 51b Riverside, Antrim.

One local woman, Joanne Elder, said: “This will inevitably detract from an already fragile historical area and will increase vehicular traffic to the narrow and partially pavemented street.

“The road is frequented by many pedestrians, being one of the most popular routes that link the Mill Race Trail walking route to the town, as well as being used by the elderly and infirm and school children.”

She said that the residents aren’t averse to development at 51b Riverside, as it will reduce antisocial behaviour in the area, but they feel that the planning application isn’t sympathetic to the local amenity and that the sheer number of dwellings is unsustainable for the site.

“This is clearly profit over common sense.” she said.

“On further investigation of the planning application, the developers clearly haven’t considered the effect the construction will have on the immediate wildlife and mature indigenous trees, nor the surface water drainage so close to a river liable to flooding.”

Parking is already at a premium on Riverside, with many people having to leave their cars hundreds of metres from their own properties and vehicles crowding access to and from homes on the narrow street, hampering deliveries and emergency services vehicles.

UUP rep Jim Montgomery has spoken out against the development plans.

“Yet again we see plans to replace one house with multiple dwellings packed into an area not appropriate for this type of development.” he said.

“This seems to be coming a trend and is not welcome when there is plenty of other areas around Antrim with enough space for multiple dwellings.

“This proposed development is in an area of the town totally inappropriate for development and the development would stick out like a sore thumb in the area.

“It is an area which will become prone to increased flooding because of greater numbers of housing.

“In an area where there is no footpaths, the increased amount of traffic and parking does not bode well for existing residents.

“As a conservation area, this development is unnecessary and inappropriate and needs to be opposed.

“Thankfully a significant number of residents opposed to the development met with Councillor Kelly, Councillor Leah Smyth and myself on Saturday and a campaign of opposition which we fully support is under way.”

His party colleague Ms Smyth added: “On Saturday Councillor Montgomery, Councillor Kelly and I met with residents of Riverside, Moylena and the Cedars regarding a planning application which would see one dwelling replaced with 20.

“It was clear to see that the residents are very passionate about the area and raised very valid concerns regarding the implications that this development would have for the area, increased traffic and flooding being some of the issues raised.

And Neil Kelly concurred, saying: “The local residents raised many issues including increased traffic in the area as well as the number of dwellings which includes a 3 storey building, flooding and conservation.

“I look forward to working with councillors Montgomery and Smyth to support the residents throughout this process.”

Gribbin Homes is based at Moneynick Road in Randalstown and is understood to have purchased other lands in the Riverside area in the past.

Details of the proposal can be found at https://epicpublic.planningni.gov.uk/

All objections must be made no later than Wednesday October 6.