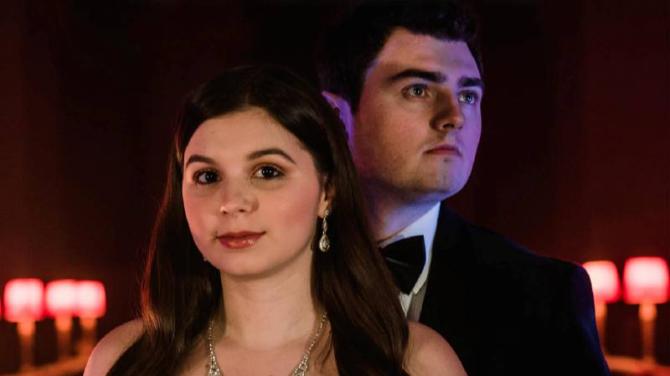 IT was Time To Say Goodbye for Antrim’s favourite singing couple Bello Duo after they bowed out of The Big Deal Final 2021.

While Conor Taggart and Victoria McClements didn’t scoop the top prize in the Virgin Media gameshow, they certainly won over a whole new audience of fans after going up against eventual winner, pole dancer Lisette Krol.

They had been tipped as early favourites to win after wowing the judges, including Boy George, JLS star Aston Merrygold and Jedward.

After performing for the judges at the 3 Arena, acts had to choose to either take a cash buy-out from the host Vogue Williams and leave the show, or turn it down in favour of a chance to hear the reactions of the panel and be in with a chance of taking home the top prize.

The couple announced: “Wow, what can we say?

“This whole experience has been absolutely incredible for us!

“The experience and exposure that we have gained from this show has been incredible and we are so proud of ourselves that we made it to the final of a national television show amongst the most insanely talented people, especially considering we only started Bello Duo less than a year ago!

“We got to perform three beautiful songs in front of an amazing celebrity panel, work with the kindest and most creative team and also learn so much about ourselves as performers.

“The biggest congratulations to Lisette Krol who won tonight, a fabulous pole dancer proving how strong and courageous women are, you’re a star and deserve everything

“Also a huge well done to every act who competed in this show and all the other finalists tonight, congrats to getting so far!

“This is only the start for Bello Duo and we are so excited to see where this takes us. We have so many incredible opportunities lined up at the moment and it’s going to be epic!”

The couple is now planning a UK and Ireland theare tour.

Conor and Victoria first met when they performed at weddings as part of the Singing Waiters group and after becoming romantically involved decided to launch out on their own, releasing an album and a series of videos.

The couple told viewers in earlier heats of The Big Deal how the coronavirus lockdown had helped bring them together as both a couple and performers.

Because of her underlying health issues, including Addison’s Disease, Victoria had to isolate and she and Conor moved in with her grandparents John and Elaine Howard.

The pair took to performing on their doorstep for neighbours who were clapping for the NHS carers on Thursday evenings.

In their first performance Bello Duo received five ‘yes’ votes from the judges including Irish singer Lyra who broke down in tears, while Jedward said they felt as if they had been transported to a ‘cathedral in Italy’.

They also got a standing ovation from the audience on several occasions.

Bello Duo will launch their ‘Out of the Darkness Tour’ at the Theatre at The Mill & The Courtyard Theatre at Mossley Mill on January 15 2022.