How the mills became woven into the fabric of old Antrim 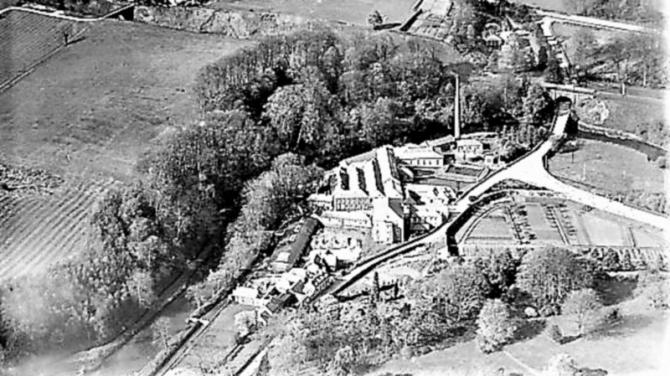 THOUGH precious little evidence of it still survives, two centuries ago Antrim was at the very apex of Ulster’s Industrial Revolution.

And the key to it all was the Sixmilewater, a river capable of generating 100-horse-power or more to move the mighty wheels. It was the life-blood, the driving force.

Many have a bucolic notion of rural Antrim in the early 1800s - of verdant fields and farms as far as the eye can see.

The truth, however, was very different. A mill created a cacophony of noise that could be heard for miles - and Antrim had literally dozens of these banging and clattering hives of industry.

All have now fallen silent and practically all have been wiped from the landscape.

But thanks to keen local historian Brendan Smith, new images of some have emerged as reminder of Antrim’s past at the very heart of textile trade.

They were taken in 1926 from the air, and they capture the sheer scale of the mills - and underline how important they once were to the economy of the town.

And it was not just textiles.

The Massereenes had a large corn mill at Mill Row in Riverside, which refined crops grown locally - and it was a surprisingly complex business.

“A fire was lighted against a wall or ditch; branches of trees were placed in a slanting position against the top of the wall or ditch; over these wheat straw was closely spread, and upon that a layer of grain was spread which, when it was dried by the heat, was carefully brushed down the straw into a winnowing-sheet, and replaced by a fresh layer of grain,” said one contemporary report.

Next door there was a weaving mill and the expansive Ferguson family paper mill, which boasted a terrifying 10-foot cutting wheel. And beside them was the brewery! Changed times, indeed.

Hard to believe in our electronic age, but paper was big business for a time. Daniel Blow ran a successful mill out in Dunadry, while Francis Joy produced the goods out in Randalstown.

But weaving was where the big money was.

Belfast’s cotton spinning industry encouraged domestic calico weaving in the late 1700s, but when huge mills were developed in Lancashire in the early 18th century the local mills had to diversify.

And many switched to the more demanding art of linen weaving. Indeed J Ferguson, over in Crumlin, made the switch to spinning flax as early as 1812.

And it proved to be a lucrative move - for the mill owners at least.

As Alastair Smyth observed in his history of the town, Antrim and district was soon being hailed as Ireland’s most extensive bleach green.

Indeed, by the 1830s almost half the adult male population worked in the production of linen.

The Ordnance Survey of 1838 made a detailed inventory of the great water wheels which provided the raw locomotive power behind the Vale of Moylena’s roaring landscape.

“The beetling mills are in the townland of Moylinny and are the property of William Chaine esq,” they noted.

“The machinary of one is contained in a house 50 by 33 feet and is propelled by a breash water wheel 22 feet in diameter and six feet broad.

“The machinary of the other is contained in a ahouse 52 feet by 38 feet and is propelled by an undershot water wheel, 17 feet in diameter and 12 feet broad.

“Fifty-two acres of spreadfield attached to those mills are in this parish.

“Greenmount bleach mills are in the townland of Tirgracey on the property of William Chaine esq. The houses are two storey and three storey high, slated and in excellent repair.

“The waterwheel at the Boghead mill is 15 feet in diameter by six feet four inches broad. The fall of the water to all these mills is 19 feet.

That’s a lot of detail, but it paints a very vivid picture of just how busy this square mile was at the time.

Little villages sprang up around the mills too. There were workers’ homes at Bog Head, though these were razed in the 1960s. Sadly the mill at Moylinney, near Muckamore Cricket Club, was demolished around 20-years-ago. All that remains is what is left of the old wheel, fenced off and rusting in peace.

Mill houses were also built at Muckamore, and thankfully they have survived and are beautifully maintained.

The mill village in Dunadry is no more, though parts of Daniel Blow’s old mill survives - as does the mill manager’s house.

It may have been a hive of activity, but it did not diminish the beauty of the ‘Moylena Valley’. Samuel Carter Hall paid it a visit while researching his book ‘Ireland’, which was published in three volumes in the 1840s - and he was impressed by what he saw.

“We have never seen pastoral beauty so happily combined with the beauty of industry,” he said.

“The high road traveller, much as we may admire the widespread bleach greens, the taste and elegance of the various residences in their immediate neighbourhood - the clean, well-dressed, homely and happy appearance of the inhabitants - can form no idea whatever of the grateful recesses of this sylvan spot.

“It is unrivalled in its way. Trees, rocks, banks and paths screened from the sun and terminating in vistas revealed the fine country behind, while at your feet the waters rush to their trained courses.

“It would be almost impossible to describe the varied, yet continued beauty of this scene: the river twists in the most fantastic manner, and Mr William Chaine has availed himself not only of the vast water power, but has erected his bleaching machinary where it least disturbs the aspect of the whole.”

Nature has now reclaimed many of the sites, though housing has also grown in the footprint of the former giants.

One of the last men standing was at Riverside, but in recent years the textile business folded and the developers moved in.

It was a similar story at William Chaine’s old mill at Muckamore. It later became the York Street Flax Spinning Company and then, in its twilight years, the Thorer Fur Factory. The grand old building, abandoned and then seriously damaged by vandals, was eventually pulled down to make way for new homes.

Some of the buildings associated with the trade still stand at the nearby Old Mill Industrial Estate though - a time capsule for a way of life which is gone forever.

* See page 45 for a special feature on the man who owned many of Antrim’s mills.