The eccentric Antrim man who transformed mills into millions 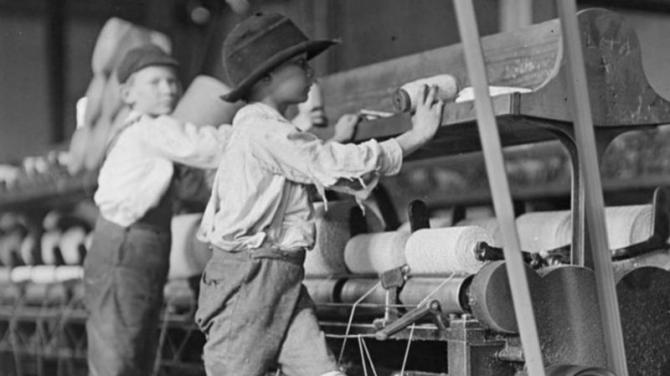 THE burgeoning success of the mills changed the face of 18th century Antrim.

Huge fortunes were undoubtedly made - but where there are winners, inevitably there are losers.

In his 1804 paean to simpler times, poet William Blake pulled no punches in his critique of the impact of rapid industrialisation.

Yes, ‘Jerusalem’ speaks of ‘England’s green and pleasant land’ - but it also pauses to consider the impact of the ‘dark Satanic mills’.

The locals were undoubtedly grateful for the work, but for many times were still hard.

Children slaved from six in the morning working the often dangerous machines ‘for buttons’.

Pregnant women dutifully stood at their looms until labour forced them home.

In the Ordnance Survey Memoirs of 1835, there was also clear evidence of a gender pay gap in many of the Antrim mills.

Barely enough to scrape a meagre existence - so one can only imagine how they felt when they saw the fruits of their labours being spent by the owners.

And in Antrim in the mid-19th century, they came no bigger than James Chaine.

He owned many of the mills that dotted the Sixmile - and, yes, he became a very wealthy man indeed.

His is an intriguing story, but what better place to begin than at the very end...

Tears were shed and glasses raised on that bitterly cold afternoon in 1885.

It was a lucrative move and soon the money was rolling in and they needed a grand home to reflect his growing status - so work began on Ballycraigy House, his ‘castle on the Rhine’.

Five years before he became a Conservative MP, he ploughed yet more cash into his home. The scale of the works finally emerged recently when an October 1869 edition of ‘The Irish Builder’ came to light.

The front of the old structure would now form the left wing, and any ‘plain features’ were being recast. A new right wing was being constructed too, including a 30 foot staircase, wine cellars, a palatial dining room, with an adjoining serving room. There was also the small matter of the billiard room, a smoking room and the creation of a large tower and 10 extra bedrooms.

The house, however, was past its prime and the Meenans moved on. Nature soon reclaimed the gardens and gradually Ballycraigy Hall came down in the world. Empty and unloved, thieves soon made their mark and carried away copper, timber and fireplaces. Contemporary reports revealed that ‘Gypsies’ descended too, temporarily taking up residence among the fading opulence.

‘The mansion, now hiding as if in shame behind trees, brambles and weeds will soon be demolished,’ the reporter noted.

For someone who so enjoyed watching the slow ticking journey of those hands, it is a sad irony that time has not been kind to the memory of his clan.