Crosskennan takes the reins to save ponies abandoned in the mountains 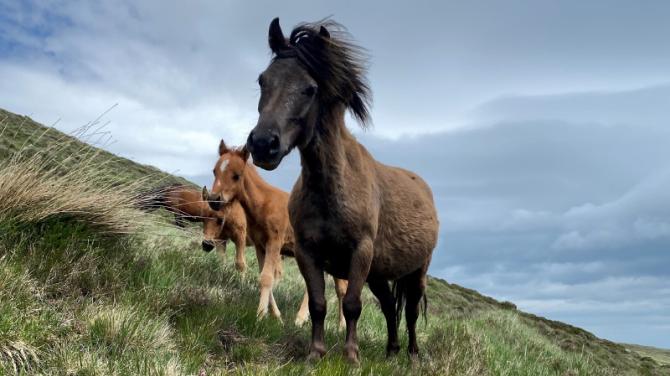 AN Antrim animal sanctuary is one of the lead organisations helping to save horses and ponies which have been abandoned in the Mourne Mountains.

The National Trust has teamed up with Equine Halfway House and Crosskennan Lane Animal Sanctuary to try to bring the starving and lame animals off the range and get them the care they need.

They say the growing number of equines dumped in the area has lead to herds of feral horses showing signs of inbreeding and genetic deformities, infestations of fleas, worms and other parasites and malnutrition.

The matter was exacerbated when a wildfire in April pushed the herds higher into the peaks and reduced their grazing areas.

Thirty horses and ponies have been rescued already, but others have perished, due to starvation and injury.

It is thought that the animals are being dumped by people struggling to afford to feed or keep them and who are opting to turn them loose in the area to fend for themselves.

Unfortunately many modern breeds and types of horse are not suited to living out all year round with sparse grazing and rocky terrain.

The heather and bracken which abounds in the Mourne can also be poisonous to horses.

A foal was recently found with an open leg wound on the slopes of Slieve Commedagh and had to be put to sleep, while another died close to Bloody Bridge outside Newcastle.

It is thought that there are up to 50 horses still living in the mountains.

Marc Vinas, Area Ranger for the National Trust, said: “People may enjoy looking at them, but the reality is that no one is taking responsibility for the safety and welfare of these ponies.

“So we are supporting two local equine rescue organisations, Equine Halfway House and Crosskennan Lane Animal Sanctuary, in their efforts to remove these horses from our land and give them the care and attention they need.

“It’s important for the public to understand that these are not managed herds of hardy native breeds like the Exmoor ponies we use for grazing at Murlough Nature Reserve,” he added.

“They are domesticated horses in origin that have been abandoned in the mountains over a number of years and are not adapted for living in such harsh conditions.”

Katryna from Equine Halfway House, said: “To the untrained eye the horses may look quite healthy, but their rounded tummies are the result of a severe worm infestation.

“These parasites drain nutrition from the horses whilst at the same time, swelling their bellies.

“If left untreated, this can result in long term health problems including gut damage, colic, weight loss, diarrhoea or even death.

“Prone to injury, with little food and limited access to fresh water, the horses run the risk of death in the wildfires that are increasingly common on the mountain, starvation or a painful death through injury.

A Crosskennan Lane volunteer has set up Mourne Horse Watch on Facebook to try and determine their location.

Members of the public who come across them while hiking or walking are being asked to take pictures, drop a pin on Google maps and send a private message to the page who will use this information to locate the animal.

A spokesperson from Crosskennan Lane said: “Our aim is to rescue the ponies from the mountain so they can be brought back to good health by receiving the required veterinary, dentistry and farrier treatment.

“Once this is achieved, we can look for suitable homes for the horses where they can live with the care they need as a domestic breed of equine.”

One of the luckier ones was a 10-month-old pony called Robyn, rescued in January by Crosskennan Lane on National Trust land close to Bloody Bridge.

“Robyn was in such a bad way that the vet confirmed she wouldn’t have lasted another 24 hours on the mountain without the sanctuary’s intervention,” said a National Trust spokesperson.

“Her dental issues were so severe she was unable to chew grass enough to swallow it, and so was surviving solely by sucking the nutrients from the grass and spitting it back out.”

They said the pony was incredibly underweight and weak as a result and also riddled with lice and worms.

“She has gone from strength to strength at the sanctuary, and has went from a feral foal who was terrified of humans, to one who adores attention and being groomed, following staff around for cuddles,” they added.

“Robyn has a potential new home with a family with two little girls, where she will continue her training and have regular dental treatment.”

Both Crosskennan Lane Animal Sanctuary and Equine Halfway House welcome any donations from the public to help cover veterinary and dentist bills, food and bedding.