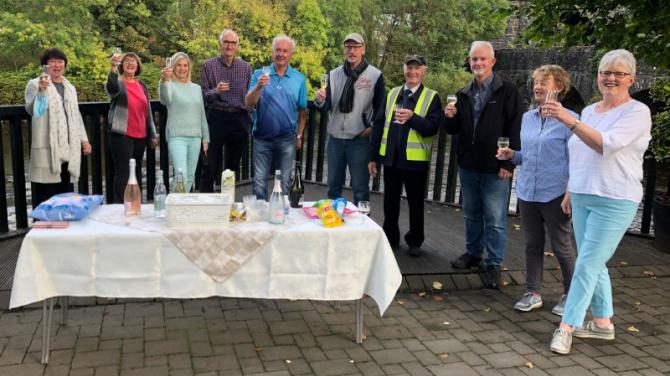 THE volunteers of Tidy Randalstown have certainly had plenty to celebrate over the last two weeks.

For months they have dug deep in their efforts to make sure the town not only looks tidy but also offers plenty of floral colour and provides a haven for pollinating insects – and you could say they’ve been rewarded in spades!

On Friday (October 8) the group learned that their two submissions to the Royal Horticultural Society’s Community Awards had both been judged ‘outstanding’. The online competition was open only to previous award-winning bloom groups and attracted 118 entries over five categories.

Twenty-one of these were judged ‘outstanding’ and Tidy Randalstown was one of only three groups across the UK to receive the accolade in more than one category.

The group’s entries were submitted in the Planting for Purpose and Cultivating your Community categories.

Planting for Purpose told the story of the transformation of the railway embankment to create the striking and beautiful Heritage Garden at the entrance to the town.

The Cultivating your Community entry described the landscaping project around Maine Fold and along the Burn which had involved and inspired children from three local schools as well as the Fold residents in turning a litter and weed-infested area into an attractive space for all the community to enjoy.

Two videos were produced to support the entries and the RHS were so impressed that they sent professional videographers to take more footage of the work.

On the evening that the results were announced a group of the volunteers assembled at the Viewpoint for an al fresco celebration of their success while passing motorists hooted and waved their congratulations.

Less than a week later, Chairperson Helen Boyd and committee member Linda Houston travelled to Gracehall near Lurgan to hear the results of the Translink Ulster in Bloom competitions, where Tidy Randalstown was entered in the Small Town category.

For the fourth time in a row Randalstown scooped the first prize, with the judges remarking on the effective use of both summer bedding and perennials in the town’s displays.

The ‘Translink’ bed on the Station Road, featuring a model train and a railway track set out in flowers, won the award for best Translink display and the icing on the cake came when Helen Boyd was named Community Champion in recognition of her unstinting efforts and inspirational leadership over many years.

Commenting on the latest string of successes, Helen paid tribute to the hard work and dedication of all the Tidy Randalstown volunteers, the unwavering support of Randalstown’s residents and business community, and the ongoing support and practical input provided by Antrim and Newtownabbey Borough Council.