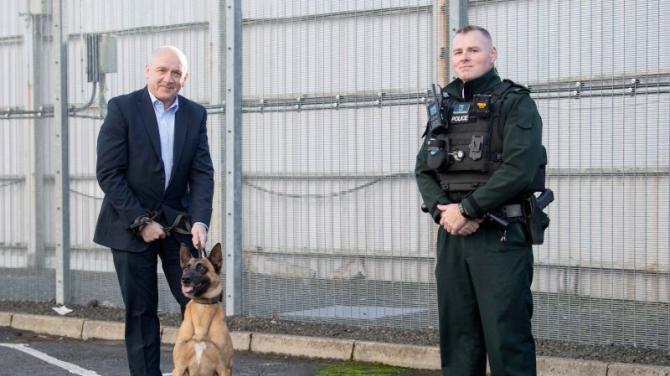 The Alliance Party MLA spoke after visiting Daphne, the police dog injured during civil unrest in Belfast earlier this year, at the Steeple training facility.

Last month Antrim and Newtownabbey Borough Council gave its backing for greater protection for service animals after the stabbing of another canine.

Finn’s Law refers to amendments made to Animal Welfare legislation in England and Wales following an attack on a Police Service Dog that was seriously injured when on duty with his handler.

The dog was stabbed repeatedly by the offender before he turned his attack on the dog’s handler who was also seriously injured.

Prior to the amendment of the Animal Welfare Act 2006, defendants charged under section 4 of the Act were able to argue that they were justified in applying force against a service animal in self-defence and that, as a result, they had not committed the offence of causing unnecessary suffering.

Although dogs are currently the only service animals in Northern Ireland, it is proposed that any added protection given should be broad enough to apply to all species of service animal.

The council agreed that the safeguards proposed by the Department are sufficient and considers it necessary to increase the penalties for causing unnecessary suffering to a service animal.

Mr Blair said: “I welcome the fact that ‘Finn’s Law’ is being brought forward for introduction in Northern by the Department of Agriculture, Environment and Rural Affairs.

“Only last week, at the DAERA Committee I supported the Department’s request for accelerated passage of this legislation so that it can satisfactory concluded in this Assembly mandate.”

“Given my role on the DAERA Committee, the Northern Ireland Policing Board and as Chair of the All-Party Group on Animal Welfare, I sought an opportunity to visit police dogs and talk with their handlers, and I am grateful to the local Antrim & Newtownabbey Police team for setting this up.”

“I recognise the invaluable work carried out by brave our service animals in Northern Ireland.

“It was troubling to discover that Daphne had been injured in civil unrest over the Protocol earlier this year.

“I am pleased she has now fully recovered and has even featured in an edition of the BBC Crime NI television show.

“I am pleased that extra protection for these service animals is being progressed.”

PD Daphne joined the police service in September 2020 and completed her training in December 2020, according to the PSNI.

After being attacked by thrown masonry in April, her hind leg required stitches.

She was also understood to have been cut by broken glass.

The dog, along with 19 PSNI officers, was injured after police came under attack on the Springfield Road and Lanark Way interface.

She has since helped fundraise for the Thin Blue Paw foundation, a charity which supports and rehabilitates both serving and retired police dogs from across the United Kingdom.