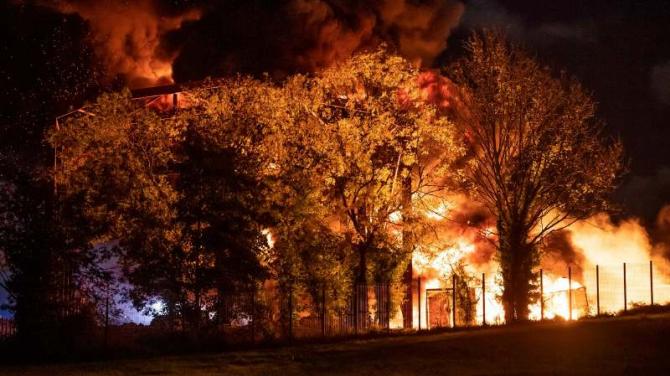 A NUMBER of businesses based in Antrim are counting the costs today after a huge blaze broke out at Rathenraw Industrial Estate.

The Northern Ireland Fire and Rescue Service now says that the fire may have been started deliberately.

Several large explosions were heard from the site, which is home to a mix of small family firms and larger global companies including SP Group, WS Dennison and Marjon Glass, Windows and Doors Ltd.

Stiles Way, which runs alongside the facility, was closed for a time and residents in nearby housing estates were told to stay inside and close windows and doors.

The Fire e Service was called to the fire at Rathenraw Industrial Estate at just after 8.30pm on Tuesday.

Thirty-eight firefighters and six appliances were at the scene at the height of the blaze.

Water jets and foam were used to help bring it under control as crews battled through the night to bring the inferno under control.

At this stage, it is believed a lorry caught fire and it spread to a truck containing plastic as well as 30 other trailers.

A spokesperson from Marjon took to Facebook to say: “Folks I see all your messages and we appreciate every one and every phone call.

“We have no idea at the moment of any damage or devastation as we can’t get any access at all.

“Please bear with us as we face the uncertainty over the next few days.”

A spokesperson for NIFRS said: “Last night at 8.35pm we responded to a fire in a yard in Rathenraw Industrial Estate, Greystone Road, Antrim.

“At the height of the incident there were five Fire Appliances, an Aerial Appliance and a Command Support Unit in attendance.

“Firefighters worked hard in challenging conditions to tackle the fire.

“They used six water jets and a foam jet to extinguish the blaze, and also assisted with moving plant machinery to a safe location to prevent the fire from spreading to adjacent buildings.

“Unfortunately 18 lorry trailers were destroyed by the fire.

“The cause of the fire is believed to have been deliberate ignition and the incident was dealt with by 1.33am on Wednesday 20 October.”

See full report and pictures from Dave Pettard in the Antrim Guardian next week and watch this website for more updates.