Aiken predicts big gains for the UUP as South Antrim opts for 'hope, not fear' 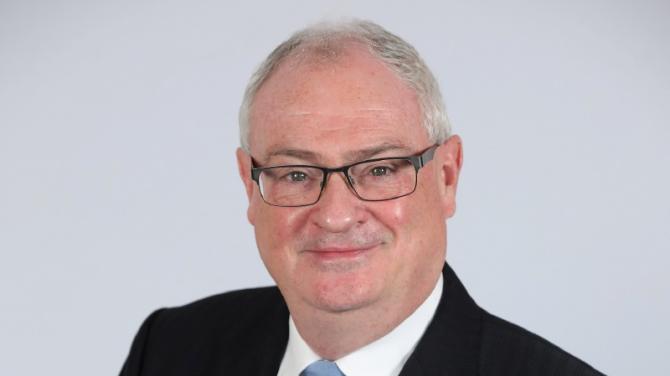 ULSTER Unionist MLA Steve Aiken is not a gambling man, but as Stormont lurches back into election mode he is prepared to bet that support for the DUP across South Antrim is on the wane.

Once an impregnable UUP stronghold, the balance of power shifted during the Trimble years as voters deserted them in their droves as divisions left a whiff of rebellion in the air.

The former submarine commander senses the same cracks now running through the Democratic Unionists - and he reckons that he and running mate Paul Michael have the political firepower to blow them out of the water.

The pair ran together before in 2016 and they proved to be a durable team.

Only Mr Aiken crossed the line on that occasion, but the Antrim rep came tantalisingly close - coming within 150 votes or so from taking DUP man Trevor Clarke’s seat.

Times have changed since then, of course - but the former leader insists it is in their favour.

Damaging rifts have emerged in their rivals’ ranks. The ousting of Arlene Foster and her successor Edwin Poots has, he said, shattered any illusion of unity.

There is also the ‘stagnation’ at Stormont to consider.

“With Sinn Fein and the DUP at the helm we are stuck with a zombie Assembly.

“They are going through the motions - and going nowhere fast,” he told the Antrim Guardian.

“They have been sharing power for over a decade and what have they achieved?

“Where is their vision for the future?

“The truth is they don’t have one.

“The Ulster Unionists are offering positive change, and the people are embracing that. There is a shift away from the DUP and also the Alliance back to the UUP.

“There are also people who have felt disengaged from politics who are responding to our message.

“We want to focus on the real issues that are impacting on people’s lives - things like health, education, jobs, infrastructure and the environment.

“I am chair of the Finance Committee, so I see where the £16 billion is being spent to keep Northern Ireland PLC going, but I don’s think there’s one person out there who thinks it’s being well spent.

“There are examples of waste everywhere.

“In education, why do we not educate our kids together? And why do we have to have so many health trusts?

“The Northern Ireland electorate have a great opportunity to change the way things are done on the hill.

“By voting Ulster Unionist, and I am confident that many will, this could be a transformative election.

“No doubt Sinn Fein and the DUP will trot out the same tired old rhetoric - ‘a vote for us is a vote for a united Ireland’ or ‘vote for us to ensure a unionist First Minister - but the voters are more sophisticated than that.

“They can see through the bluster.

“We will be fighting this election on a platform of positive change.

“And we will be campaigning to be the biggest party.

“I sense there is a tipping point.

“I have spoken widely with community groups, the Orange Order, business leaders and farmers and I get a very strong sense that there is an appetite for change - and that the Ulster Unionist Party is the most credible party to lead Northern Ireland.”

But will they be able to convince the voters who have turned their back on politics?

“I know that some people have become disillusioned with politics because they feel that their vote doesn’t make any difference.

“Our job is to convince them that it does.

“Remember, you’re voting for the people who decide how to spend that £16 billion.

“You need to have your say.”

The big question, of course, is when. Early 2022 is a distinct possibility - but whenever it is called, the UUP say they are ready to hit the ground running.

“We are on an electoral footing now.

“Paul and I have known each other for a long time and we will work well right across the constituency.

“My concern is that it could be a very toxic campaign, with the border poll and the protocol being pushed by the DUP and Sinn Fein.

“I think, however, that the electorate will look beyond that.

“We’ve had that ‘them and us’ fire and brimstone for too long now.

“People are now asking different questions. They are wondering how can we make life better here for everyone?

“That sums it up.

“At the end of the day that’s why I’m in politics - to be hopeful.

“We are living in a fantastic part of the world but we are being held back by the negativity of others.

“We really can do better.

“And, after the votes are counted, I think we will.”

He has also made an early call to give the candidates an opportunity to set their stall during the campaign.

“I think it would be very useful to give voters the chance to see the people who are chasing their votes and hear where they stand.

“They could be held over a series of weeks and perhaps broach various topics, such as the Arc21 incinerator - which myself and Paul both oppose - the problems in our primary care system, under-investment in our schools and so on.”

Fighting talk. This naval officer, it seems, has no intention of sailing into the sunset just yet.