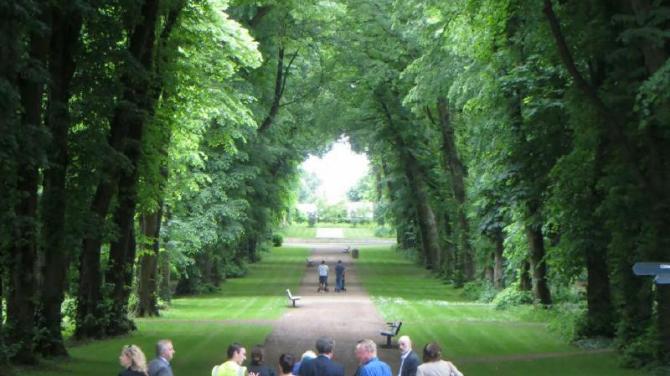 ANTRIM and Newtownabbey Borough Council has responded to recent concerns about the state of some trees in the Castle Gardens, saying that extensive work has been carried out to preserve and replenish the historic woodlands.

The council spoke out after the Antrim Guardian carried an opinion piece by well known local man Brendan Smith, the Sacristan at St Comgall’s Church, which faces one side of the grounds.

He said that not enough was being done to replace old or diseased trees, but the council have insisted that it is taking expert advice and work is going on to make sure that the gardens can be enjoyed by the generations to come.

Mr Smith wrote: “I am concerned we are losing these trees and the character of this area will change for the worse as time goes on unless something happens.

“I have noticed some aspects of the woodlands that concern me.

“Firstly, I have observed that some of the very mature trees have succumbed or are succumbing to natural old age and decay with pathogenic rotting fungi attacking the seemingly unassailable trunks and limbs.

“Whilst these effects are part and parcel of a natural cycle, what is worryingly absent are the necessary replacements for these fading giants.

“If a new population is not coming up behind then when the old trees go - as inevitably they will - then all you have is open space.

“Pleasingly I have noticed some new trees planted in shelters in small numbers near the main entrance and near the circular pond.

“But in my opinion there is still not enough.

“I have also noticed the symptoms of recently arrived foreign pathogens like ash dieback, also known as Chalara.

“Unless urgent steps are taken and with purpose within a long term woodland management plan, the principle beauty of the Castle Grounds will most likely disappear over the next few decades.

“Even trees planted today will still take 30 years or more to bestow the aesthetic effects currently enjoyed by us as we wander around the wonderful path network.

“I don’t know what the long term tree regeneration plans for the Castle Grounds are, but I think there should be a start along this path now.

“Tree management involves a long term commitment and an investment in someone else’s future, something that doesn’t lend itself well to everyday political short term priorities.”

And Mr Smith certainly received backing from Antrim Guardian readers who took to Facebook to agree with some of his points.

“I have seen it changed so much over my 60 years of life. Nature is a beautiful creation and humans do leave their footprint.”

Michelle Bardon added: “Totally agree, I’ve seen the trees with the fungus around the base.

“Some of them are the big conker trees that the kids love in the Autumn.

“But replanting really does need to start sooner rather than later otherwise we’ll loose another beautiful area.”

Maddy Liddy Jenkins commented: “I hope Antrim Borough Council or whoever would be responsible reads it too and takes action NOW......not when it is too late...as that deadline is fast approaching.”

Paul Keenan said: “Looking forward to seeing the council plan for this, especially with the revenue being generated from events growing year on year?

“Is there a Castle Gardens Committee? The CGC?”

“It always makes me think about the trees that used to be on the ‘cake’ that they cut away.

“If not diseased or dangerous it was wrong to remove them.”

“Remember, a tree planted now will not look good for over 25 years, but I really hope the council doesn't shortcut the cycle and plant large trees.

“These find it very difficult to get their roots anchored.

“Way too may dogs off leads and by far too many squirrels that eat literally anything.

“Years ago I offered to make and put put up nest boxes for hole nesters.

“The reply ‘you do not have permission.”

However a spokeswoman for the council has assured readers that all steps are being taken to assure the future of the important site.

“Antrim and Newtownabbey Borough Council take the management and maintenance of their tree population in Antrim Castle Gardens very seriously and have a robust Management and Maintenance Plan.” she said.

“This plan includes a provision for a five year in depth tree survey by a specialist in the field to determine a full picture on the health of each tree.

“Following a survey report in 2016 by Dr Philip Blackstock, a renowned arboriculturalist to establish the health and condition of trees growing at the site and to provide recommendations for tree works, extensive specialist work has been carried out to ensure the health and safety of the tree stock including plans to replenish trees which could not be salvaged.

“Annual replacement of trees is carried out through replanting and in the last year tree planting at Antrim Castle Gardens includes the new Centenary Wood which consists of 400 trees made up of native species such as Oak, Hazel, Rowan and Hawthorn and a number of Cherry Blossom trees throughout the Gardens as examples.

“A scheduled five-year tree survey is due to take place in the next few months.”