Reps line up to condemn the ' deliberate ignition' 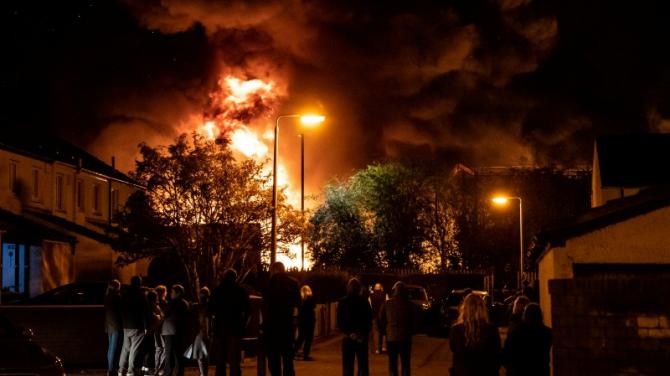 POLITICAL representatives of all hues have spoken of their disgust at the Rathenraw Industrial estate fire - and praised the heroism of the emergency services who turned up at the scene.

Scores of people had to be told to get indoors and close their windows in nearby estates as loud explosions from burning trailers and melting plastic could be heard miles away.

SDLP Antrim and Newtownabbey Councillor Roisin Lynch has praised the response of the emergency services to a major blaze on an industrial estate in Antrim.

“The whole community will want to thank the rapid response of the emergency services to the major fire,”she said.

“There is no doubt that their selfless service in bringing this dangerous blaze under control helped to prevent a more serious incident which could have caused loss of life. This incident will nevertheless be a major blow to a local business. My thoughts are with the local traders as they recover from this significant disruption to their business.

“I would like also to extend my sympathy to the residents nearby who will be understandably shaken by the proximity of the fire and the disruption caused by the closure of Stiles Way and thank them for following the instructions of the police service.”

DUP South Antrim MLA Pam Cameron MLA said: “My thoughts are very much with the businesses and employees picking up the pieces from the devastating fire on Tuesday night. Time will tell what the full impact this will have made on businesses on the site, however I hope that they will be able to recover from this terrible incident as quickly as possible.

“I am shocked and horrified to learn that the Fire Service are now treating this as a ‘deliberate ignition’ which has resulted in significant damage to property. If this was intentional as suspected, the individuals or individuals responsible need to be apprehended and brought before the courts as soon as possible.

“The sheer size of the fire and loud bangs from the inferno was terrifying for residents in the surrounding homes and could easily have spread further had it not been for the fast response of emergency services.

“I want to put on record my sincere thanks to the NI Fire and Rescue Service for their brave actions and professionalism in challenging conditions to control and tackle the fire into the early hours of the morning.”

Sinn Fein MLA Declan Kearney added: “This was a major blaze in the Rathenraw Industrial Estate and I commend those firefighters who worked through the night in extremely dangerous conditions to bring it under control.

“I understand a lorry on the premises went on fire last night and this spread quickly to adjacent trailers; up to 18 of which have now been completely destroyed.

“This will result in a significant financial loss for local business and employers. An initial estimate suggests many hundreds of thousands of pounds worth of stock, vehicles, and damage to buildings has been incurred.

“The close proximity of the fire to neighbouring homes in the Rathenraw estate was a major cause of concern and local Sinn Fein activists liaised with residents throughout the incident, providing advice and reassurance; while I maintained regular contact with emergency services until the fire was finally brought under control.

“I want to thank the local PSNI on the ground for helping to keep people safe, and while the cause of the fire is yet to be determined, I would urge the public to assist their ongoing inquiries.”

Commenting after the visit, South Antrim MLA Trevor Clarke said:“This fire has dealt a terrible blow to the business and the devastation is visible for all to see. I must place on record my thanks for the emergency services for fighting the fire and controlling it to the isolated area – if it wasn’t for them, the fire could have had much graver consequences.

“ In the weeks and months ahead, I will support the business in every way I can to help them bounce back from this.”

Paul Dunlop added: “Thankfully the spread to buildings in close proximity was averted due to the expertise of firefighters. This is an ongoing investigation and would urge anyone with information to contact the PSNI.

“I also would ask that speculation is unhelpful surrounding the cause and my thoughts are with the families of the owners and those employed by the company affected.”