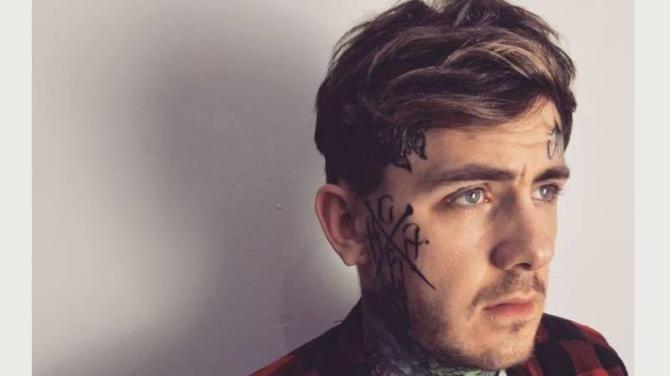 AN Antrim tattoo artist has spoken of the emotional moment when he tattooed a young Mum with the image of her son, before she passed away.

The story was first told in a promotional video by the Northern Health and Social Care Trust to explain the work carried out at the specialist MacMillan Unit, which caters for patients needing palliative care.

Occupational Therapist Alison Craig explained that as well as looking at end of life care, staff manage symptoms, look at practical every day needs and try to make things easier for patients.

“A young woman came into us for a few weeks, she had a respiratory condition and problems with her heart, joints, breathing and general pain.

“She came into the unit to have her condition managed, and get emotional and practical support for herself and her young child.

“She mentioned wanting to be able to shower herself and not to have carers coming in to do it.

“I noticed that she had a lot of tattoos and we had a conversation about why.

“She mentioned that the one thing she would love would be a tattoo of a picture of her child on her chest, it would give her peace and that he would always be with her.

“When we finished that turned into a team talk and someone recommended a local guy, Stefan Getty.

“He said he would love to do it, and would do it for free, but that his studio was on the first floor.

“This lady hadn’t done stairs in years, so that started a rehab programme, a physio helped her with breathing techniques, a doctor and pharmacist looked into pain management.

“She managed it and went up the stairs and got the tattoo done and loved it, we got it sorted for her to give her some peace.

“It was lovely for her when she went home and it gave her peace of mind.”

The Antrim Guardian understands that the lady has since passed away, but the experience has left an indelible mark on Stefan Getty from Cloak and Dagger Collective, who says it is a job he will never forget.

His business is based on Fountain Street and also includes a barber shop.

“Alison from the MacMillan Unit contacted me and of course I said yes,” he told the Antrim Guardian.

“At first I was going to bring my equipment but there were issues with the sterile environment so it was agreed that they would come to me.

“It was so overwhelming for her to even come here because of her physical difficulties and I couldn’t believe she went through a rehab programme just to be able to make it up the stairs. I was so humbled by her determination.

“I was shocked at how young she was and how she was managing with such life-limiting conditions.

“The lady was quite swollen from her treatments but we did the tattoo, it was a little portrait of her son and it took a couple of hours, we had some brilliant chats and she talked a lot about her son.

“She was very serene and accepting of what was going to happen to her and I could not believe her strength, she was a real example to all of us.

“She was ready for it and so matter of fact, she wanted to be strong for her son.

“You could tell that in her best days, she was a really strong character and would have been the life and soul of the party and would have lit up the room, and to be honest she still did.

“When it was finished she said she could die happy.

“A hush descended on the whole room.”

Stefan said that it was the ‘most important’ tattoo he had ever done.

“It was a huge deal for me, I locked myself in the toilet and cried for half an hour afterwards,” he said.

“When I heard she had passed away, I was devastated, I had never lost anybody before.

“I have done vouchers and tattoos for charity before but there was nothing like this before, it was so moving and it is something I will remember for the rest of my life.”

It is not the first time that Stefan has made a name for himself through altruistic acts.

In 2017 Cloak and Dagger raised over £800 in aid of suicide awareness and prevention after holding an event in memory of Linkin Park singer Chester Bennington, who took his own life aged 41.

Stefan hosted a charity tattoo day, where people were invited to get a Linkin Park logo in exchange for a £25 donation.

Stefan himself admitted he had been through his own struggles after being diagnosed with Multiple Sclerosis earlier that year.

“I was diagnosed with MS in January (2017) and I have spent a lot of time with other people with the condition, in treatment.

“There is a lot of depression and anxiety surrounding the condition.

“Along with that, I have been a massive fan of Linkin Park my whole life, the music and lyrics helped give me an identity and inspired some of my work, which is why I decided to hold the charity tattoo day in Chester’s memory and also to help people in the community,”

Over 30 people queued up to receive their tattoos, with people who had travelled from as far away as Dublin, Newry and Londonderry.

“It was amazing to see so many people and we ended up raising £800,” he said.

“There are a lot of people out there affected by suicide, but this was a really positive outcome and we had a good chat with a lot of young people who took the opportunity to talk and we had a very open discussion.

“There is a large amount of depression and suicide within this community which is lingering and needs to be talked about and brought into the open.”

In 2019, Stefan was County Antrim finalist in the Heart of Gold awards scheme.

Nominee Hayley Welsh said: “Stefan goes above and beyond to help others whether it be motivational speaking, helping families in need buy Christmas presents or giving out care packages to the homeless.

“He is selfless and more than deserving of the award.”

Reacting to the nomination, Stefan said: “In a way I didn’t know who I was until I almost had it all taken away from me when I was given a diagnosis I would carry with me for the rest of my life.”

Stefan spent his childhood caring for his little sister, who has special needs.

At the same time he has worked tirelessly on his career.

“I am passionate about life and giving back,” he said.

“I truly believe if everyone in the position to give back did, we would live in a far different world today.”

Among other charitable acts, also in 2019, Stefan’s parlour offered a three-day event in which people could get their scars covered up with tattoos.

In the studio, Stefan is adamant that barriers are broken down and conversations become frank and open very quickly.

“We obviously aren’t able to do what other professionals can do but clients start to talk without realising,” he said.

“A lot of tattooers walk that line and in this creative and non-judgemental space people can open up.

“Tattoos do that in general - people can’t help but look at them and ask about them so that already breaks down barriers.

“I suppose it’s like they’re a call to action.”

“I think we all really appreciated the fact that the scars people bear are linked to something so uncontrollable in their life.

“This gives them an opportunity to commemorate a tough time or celebrate what they have come through.

“They can either feel ashamed and want to cover them up or celebrate that breakthrough by turning them into art and we wanted to do that for them, whatever their reason.

“We had up to about 15 people booked in over the three days and it was eye opening for us too.

“As human beings, our biggest strength is our ability to connect with others and we should be trying to do that, trying to understand and help each other where we can.

“Perhaps this could be a springboard towards recovery for people and, as well as that, a catalyst for change to get that conversation going too.

“We were here over those three days to help make those scars beautiful and help these people to feel more positive and change the stigma.”

Stefan also once moved his entire studio downstairs to accommodate a client in a wheelchair.