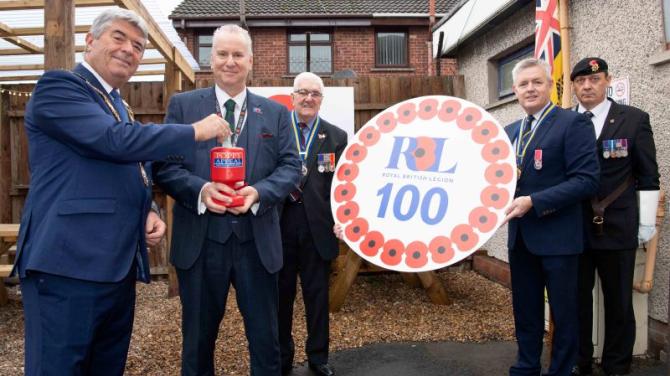 THE chairman of the Antrim Branch of the Royal British Legion has paid tribute to the generosity of local people at the launch of this year’s Poppy Appeal.

Alderman Paul Michael has worked at the Legion for 37 years and during that time he has seen no sign of local support for the national fundraiser flag.

Indeed, quite the contrary.

“The good people of Antrim have been so generous. We always seem to punch well above our weight.”

Obviously COVID has made that task more difficult, but the Legion will have volunteers in Asda and Tesco in the run up to Remembrance Sunday. Wreaths, poppies and badges will also be available from their HQ at 2 Lough Road.

The pandemic has forced the organisers of this year’s centenary Act of Remembrance to make some compromises. The Youth organisations, for example, will not be able to join the main procession this year.

The parade will meet up at the Railway Street car park at 2pm before making their way to the memorial for members of the armed forced who were murdered during the Troubles.

After a brief wreath laying ceremony, the procession will continue on to All Saints’ Church, where Legion Chaplain Rev Stephen McBride will deliver this year’s service.

From there it will be on to the Cenotaph at Market Square.

It is understood that there will be no representatives from the families of the soldiers murdered at Massereene in 2009 this year, but a wreath will be laid at their memorial by a member of the Royal Engineers.

Alderman Michael said that many veterans will be there to bow their heads in memory of fallen comrades - though, sadly, there will be few who saw action in the Second World War.

“Time marches on for us all and it is with great regret that there are now only a few left who took part in the 1939 to 1945 conflict,” he said.

“Down the years it has been a huge privilege to meet with people who had served with such distinction in various theatres of war.

“I’ve spoken with people who fought in the Great War and WW2, but also those who served in Korea, the Falklands, the Gulf, Iraq and Afghanistan.

“The stories of their service were all very different, but all shared a common bravery. It was truly humbling to spend time with them all.”

Kate Green, the Legion’s Ireland Area Manager, said the challenges facing former service personnel were as big as ever.

“Every poppy counts, which is why getting our Poppy Appeal collectors back out in local communities is so important,” she said.

“As the impact of COVID-19 continues to leave some members of the Armed Forces community in urgent need of our help, your support is as crucial as ever.

“We cannot help them without you which is why we are urging the public to look out for their local collector and donate. Your contribution will make a real difference to the lives of those in our Armed Forces community who have given so much.

“The RBL was formed in the aftermath of the First World War to fight for the rights of those who had given so much and come back to so little.

“Today, we continue to stand with the Armed Forces community, supporting them in the face of hardships, injuries and bereavements.”