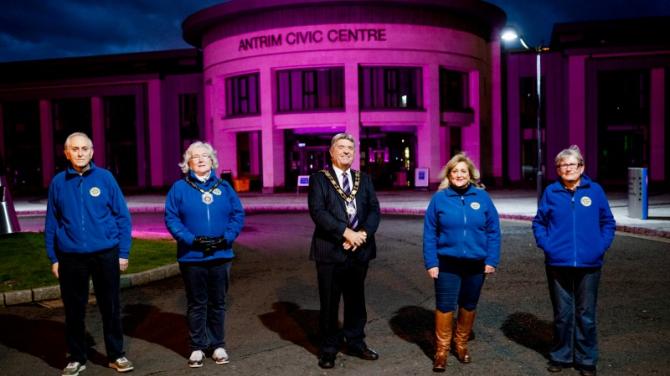 SINCE 1985 Rotary’s key humanitarian priority has been to rid the world of polio.

October 24th was World Polio Day and once again the Rotary Club of Antrim were marking the occasion.

Indeed Rotary clubs around the world were doing projects to celebrate World Polio Day and to celebrate the work that Rotarians have done to almost eliminate polio.

The polio virus has almost been wiped out, with the exception of Afghanistan and Pakistan.

Yet, remarkably, the numbers off wild polio virus have dropped dramatically from 140 in 2020 to just two cases this year, one each in Afghanistan and Pakistan.

Despite risks and challenges, due to the recent instability in Afghanistan, the polio programme is staying - and vaccines are being delivered to the children most in need.

Rotary began their work to eradicate polio back when there were 1,000 cases per day in 125 countries, paralysing and even killing children.

Rotary members continue to play a key role in many aspects of the polio programme including fundraising.

However the COVID-19 pandemic had a serious effect on fundraising, as clubs were not permitted to meet face to face for almost a year.

Rotarians use the colour purple to celebrate the almost eradication of polio.

When a child was vaccinated their little finger was dipped in purple dye to show that they had received their vaccine.

The purple corms will bloom in March and serve as a reminder of the polio programme.

Rotarians from Antrim would also like to say a massive thank you to Antrim and Newtownabbey Council, who again lit up their Civic buildings purple to commemorate World Polio Day.

The 99.9 per cent eradication of polio gives us hope that a cure will be found for another deadly virus, COVID-19.

But while the successes to date have undoubtedly been huge, there is no room for complacency.

In order to sustain this progress, around two billion doses of the vaccine still have to be given to more than 400 million children in up to 60 countries every single year.

This is in addition to the routine immunisations that happen elsewhere around the world, including in the UK and Ireland.

Without full funding, political commitment and volunteer-led social action, there is a threat that Polio could return, putting children worldwide at risk.

Rotary has committed to raising 50 million dollars each year to support global polio eradication efforts, with that funding matched two to one by the Bill and Belinda Gates Foundation.

Rotary has contributed more than two billion dollars to ending polio since 1985 - and local Rotarians have supported this campaign from the beginning.

“I am pleased the Council is supporting the Rotary Club in their fight to rid the world of Polio, said Mayor Billy Webb.

“This campaign will help raise awareness of the continuing fight against this disease.”