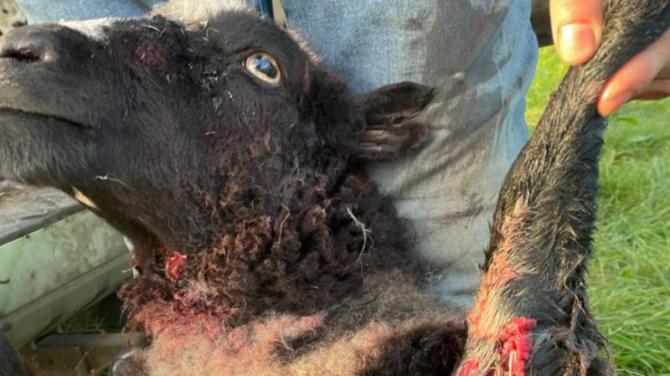 A WOMAN has pleaded for people to keep their dogs on leads and away from livestock after sheep were killed and more were found gravely injured last week.

The incident took place in a field on the Ballyquillan Road near Crumlin last Monday.

The woman, who did not wish to be named, said that she and her husband, who farms the land, had been left ‘very distressed’ by the aftermath of the mauling.

She said that while she has seen the results of dogs attacking sheep in the past, nothing had prepared her for what happened on this occasion.

“We were called to say there was a dog in the field.

“When we got there, there were three sheep lying dead, two more are really badly injured and probably won’t make it, and another has been very badly bitten.

“This wasn’t just fun and games, it wasn’t sport, it wasn’t a chase, it was horrendous, I will never get over what I saw.

“The first sheep I went up to had its’ ribcage exposed.

“At that point I couldn’t look any more and had to walk away.”

“The others had holes in them. The dog would have had to have got through wool and skin to make those kinds of injuries,

“Another has a very bad bite on the neck.

“I cannot stop thinking about what those poor animals went through and the others in the field were traumatised.

“My husband is a farming man and he was just so distressed by what he had to deal with and couldn’t sleep.

“Sheep are docile animals, they would not have stood a chance.

“For us it is not about the financial loss, it is about what those poor animals suffered, they were practically eaten alive and torn apart.

“It is likely that this went on for a few hours before we were notified.

“We don’t know how many dogs were involved in the attack or if just one dog did all the damage.”

The woman said that she wants to raise awareness among dog owners about the damage that can be inflicted.

“I just ask people to be responsible,” she said.

“Keep dogs on a lead and do not let them run on farming land.

“We are dog lovers, we have dogs ourselves, this was a nasty attack, but the dog should never have been put in this position.

“We’ve lost sheep to dogs before, but nothing like this. I can’t even find the words to describe what we saw, it was just so shocking and brutal, none of us had ever seen anything like it.”

The Antrim Guardian understands that Antrim and Newtownabbey Borough Council dog wardens were at the scene and are investigating the incident.

It is thought that the one dog observed at the scene was a bull breed type.

The woman added: “My daughter took photos of the sheep which were dead and injured and I don’t know how she did it, I couldn’t look at the poor things, they were basically reduced to carcasses, some while they were still alive.

“This is going to take a long time for all of us to get over, and could have been so easily avoided.

“I really do urge people to be responsible dog owners and I never want to see anything like this happening again.”