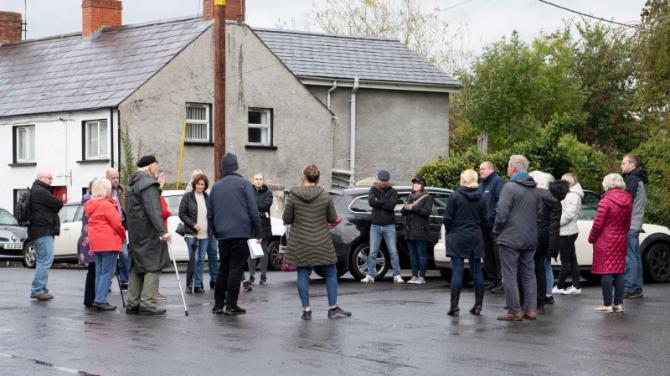 SOUTH Antrim DUP MLA Trevor Clarke has backed residents of Riverside and surrounding areas in their battle to oppose plans for 20 new homes on this historic street.

Last month the Antrim Guardian revealed the plans for the currently derelict site of 51b Riverside, Antrim.

Parking is already at a premium on Riverside, with many people having to leave their cars hundreds of metres from their own properties and vehicles crowding access to and from homes on the narrow street, hampering deliveries and emergency services vehicles.

Gribbin Homes is based at Moneynick Road in Randalstown and is understood to have purchased other lands in the Riverside area in the past.

A campaign against the development has been started by residents, headed by local woman Joanne Elder.

She said that the residents aren’t averse to development at 51b Riverside, as it will reduce antisocial behaviour in the area, but they feel that the planning application isn’t sympathetic to the local amenity and that the sheer number of dwellings is unsustainable for the site.

Mr Clarke has rowed in behind the residents after attending a series of meetings to hear their concerns.

Addressing them directly and encouraging them to lodge objections, he said last week: “As I am sure you will agree from living in the area, the road and drainage infrastructure is inadequate to accommodate such a large-scale development on this site, along with the cumulative impact of other development in the area.”

The MLA said that the council, in exercising its planning functions, has a duty to be guided by the objectives set out in the Antrim Town Centre Conservation Area document.

In a letter which he has also encouraged local people to submit to council in objection to the plans, it is noted that the proposed new development is ‘not in keeping with the history, character or scale of the Conservation Area of Riverside’, adding that the apartment block will be taller than existing homes.

The letter continues: “Riverside is a 19th Century Mill Row cul-de-sac and as such was never designed to cope with its existing traffic never mind the traffic flow that would be generated by this proposal.

“The traffic generated by 20 dwellings being possibly 50 or 60 more vehicles ,would put a strain on the existing single lane bottleneck on the approach to the site that would undoubtedly reach a breaking point for the existing residents and the new homeowners alike if approved in its current form.

“Consideration must be given to the numbers of dwellings proposed within this site, and further consideration should be given to additional parking within the site, not only for the new owners but also the existing residents.

“Calculations for traffic flow and parking of any proposal on this site must take into account Riverside as a whole including existing pedestrian, traffic and parking needs.

“Furthermore the poorly designed, inappropriate and frankly dangerous access arrangements of this proposal do not take into account its intersection with the busy Six Mile Water Walk, the flow of pedestrians and existing traffic within Riverside.”

The letter also notes that consent is required to demolish the existing old mill owners’ residence on this site.

“The Antrim Town Conservation Area document clearly states that such consent will only be given where it can be demonstrated that this proposal will meet the councils overall goal in relation to the Conservation Area,” said the letter.

“This has not been demonstrated in this proposal.

“Policy BH 14 of PPS 6 advises to only permit the demolition of an unlisted building in a conservation area where the building makes no material contribution to the character and appearance of the area.

“The building dates back to the early 1800s and was once an important part of the former Paper Mill complex on the river.”

On the subject of open spaces, the letter continues: “Whilst the lack of open spaces is a consequence of Riverside’s historical development, the creation of new open space and the further protection of the existing mature trees and hedgerows within the site should be carefully considered to ensure a positive contribution to the character and visual amenity of the area.”

It was also noted that the proposed development has no drainage mitigation measures.

“With the additions of Riverside Mews and Riverside Manor there have been issues with sewerage/drainage flooding into the roads via the road drains and ended up in the Six Mile Water, as the current system was unable to cope and any proposed development could only lead to total breakdown in the system.” says the letter.

“Added to this my concerns regarding the increase in water surface run off from this proposed development, into Riverside which is renowned for flooding, a proper drainage assessment is required immediately.”

The letter concluded: “The proposed apartment block (15-20) is sited roughly 2m from the southern boundary with Moylena Grove properties 43-46.

“The height of this block is well in excess of the height of the boundary wall (stated to be 24-3m). This will impact on the privacy and daylight of said properties on Moylena Grove.

“Block 1-7 will negatively impact visually, being completely out of place with the historic area.

“The drastic removal of the tall fir tree boundary in place between the proposed block and the Faith Mission Hall will have a hugely negative impact on the amenity of its surrounds.

“The 2-3 storey apartment blocks are in fact much taller than the two storey houses in the area, adjacent to the entrance to the development and on rising ground they will be dominant if developed beside the hall.

“The noise from the months of construction and the heavy construction traffic on this narrow street will negatively impact on the amenity of my property and many other surrounding properties.”