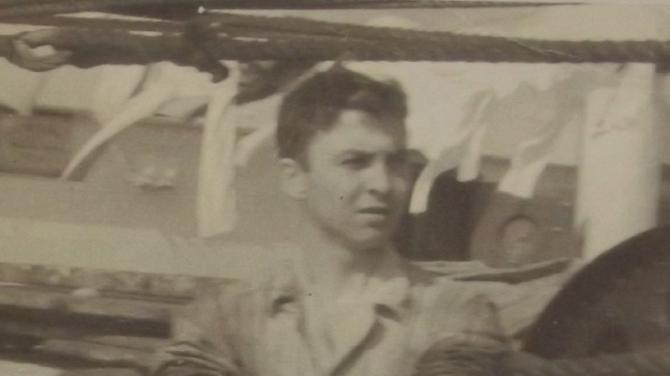 TIME may indeed heal most wounds, but painful memories can remain hidden away for a life time only to re-emerge.

That truth is particularly pertinent at this time of year as communities gather to bow their heads on Remembrance Sunday to honour those who paid the supreme sacrifice in times of war.

A dwindling band of that heroic generation who fought in the Second World War will be there, as they always are, to salute fallen comrades once more. Many will have been hesitant to discuss the horrors they witnessed or the agonies they endured - but their dignified tears will tell their own story.

Antrim man Bobby Cameron recognises that sense of overwhelming grief all too well - because he saw it first hand during his travels.

The year was 1975 and the local man was teaching in Lisburn Technical College. He enjoyed his work, but he knew there was another world outside his classroom.

And then, shortly before the summer break, an exciting opportunity sailed into view.

The MacAndrew Shipping Company were looking for a holiday relief engineer. Would he be interested?

Before he knew it he was aboard the ‘Irish Coast’ en route to Liverpool, where he would join the crew on the MV ‘Velarde’.

She was a handsome 18 knot cargo vessel, and her good looks had earned her the nick-name ‘the yacht’.

From there it was full steam ahead to Bilbao, Cartagena, Barcelona and Valencia with Fourth Engineer Cameron hard at work in the engine room.

The colourful characters he encountered on the voyage were chronicled in his fascinating book ‘Antrim and Beyond: Tales of Distant Lands’ - but one story remains painfully vivid almost half a century on.

They were homeward bound at the end of August, crossing the Bay of Biscay. It was around twenty minutes to midnight and the sea was calm.

“I asked Jack the greaser to call the watch as I busied myself in preparation for completing the Engine Room Log,” he recalled.

“When he returned he appeared to be upset. He had clearly been crying.

“I asked him if anything was wrong and, after some hesitation, he told me his story.”

And what a story it was.

“Ah, you know when you asked me to go up top I saw we were just off Ushant Light - and Ushant Light has a bad memory for me,” said Jack.

“He was a lad just like you and we just talked about things the way you do.

“The Third asked me to call the watch at some time before 4am.

“I was up there when the torpedo struck.

“We rushed down to see if the Third was alright. At first we couldn’t see him, then we found him lying up on the funnel uptakes.

“He was dead. There wasn’t a mark on him. The concussion had killed him.

“But the boat was sinking fast and had to be abandoned, with the Third left to go down with her.

“It saddens me badly at times when I remember.

“It happened just abreast the island of Ushant off the French coast but well out...”

For a few short moments the grizzled old sea dog was back in 1941. Those memories never fade.

As for Bobby, his voyage was nearing its end.

“A little over two days later I said farewell to Jack, the motor ship ‘Velarde’ and all my recent companions at Shed 2, Canada 3 docks in Liverpool.

“I was never to see any of them again.

“With a fair wind and some luck I would make it home in time to attend a staff meeting in Lisburn Technical College before the new term in the Engineering Department.”

But the story does not end there.

“Some years later my good friend the late Captain Jim Bothwell, a Master Mariner, got in touch.

“He knew that I had some connections with the MacAndrew Company, so he sent me a copy of the company losses in the World Wars.

“Remembering my conversation with Jack, I immediately began scanning the losses during the Second World War.

“I was looking for a steam sunk off Ushant in 1941, and suddenly it was there.

“The MacAndrew steamer ‘Ciscar II’ was torpedoed on August 19 that year and the 2,436 tonne vessel went down.

“I often think of that young man - ‘a lad just like you’ - lying at the bottom of the Bay of Biscay.

“It is amazing how our memory selects some items for lasting retention while disposing thousands of others to the winds.

“I have often wondered who that Third Engineer Officer of the SS Ciscar II was and from what part of the country he had hailed from.

“I never met him, but his story will be with me forever.”