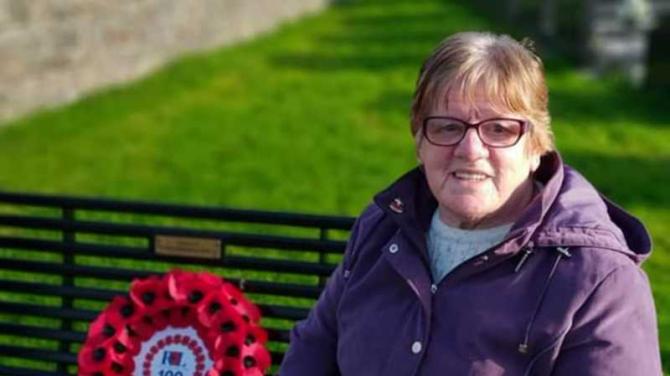 A ‘REMARABLE’ Antrim woman who has beaten cancer six times has urged local people not to give up hope if they get that life-changing diagnosis.

Elizabeth Hamilton, or Liz to her many friends, is now looking ahead to her 82nd birthday - and insists that she has ‘no intention of slowing down’.

The Ballycraigy woman had her first cancer operation when she was 46, after discovering a lump on her breast.

But she was soon back at work on the wards of Muckamore Abbey Hospital.

Incredibly, while she was receiving treatment she was travelling back and forward to Londonderry on the bus to nurse her sister, who was terminally ill with the disease.

Sadly, cancer continued to cast a long shadow over her family.

“It’s in our family and there have been some very sad days, but where there’s life there’s always hope,” she said.

But despite the heavy toll that cancer took on her family, she continued to offer support to others in their time of need.

A keen supporter of the annual Poppy Appeal, she has also visited countless people in hospital down the years.

She was often accompanied to events by her husband Raymond. He died 16 year-years-ago this week, on Remembrance Day. Again, cancer was to blame.

Her personal battle was not over, either.

Twenty-three years after receiving the all clear, it returned.

She had operations to remove lymph glands and parts of her kidney and bowel.

Around two year’s ago she was back in surgery, and the rest of the bowel was taken away, along with the kidney.

“The surgeon came to visit her a short time later and couldn’t believe that she was back on her feet so soon,” said daughter Alison Vaughan.

“It really is a miracle. No matter what life throws at her, she bounces back.

“She never gives up or feels sorry for herself. She’s an amazing woman, she really is.”

Her sister Cindy agrees that their mum is an ‘inspiration’.

“My mother has been through a lot in her life and has overcome it. I’ve never met a stronger person,” she said.

“Our mother has looked after most of her sisters and brothers when they were all passing away with cancer. She also cared for our dad at home.

“She is proof that there’s always hope. Never give up.

“We are all so proud of our mum. She’s always been such a loving, caring wife, mother, grandmother and great grandmother.

“I was speaking to a nurse the other day and she just couldn’t believe it when I told her about mum,” he said.

“She really does have the heart of a lion. She has taken all that life can throw at her and she’s still going strong.”

Councillor Paul Michael, chairman of the Antrim Branch of the Royal British Legion, said Liz is ‘an example to us all’.

“I’ve been with the Legion for 37 years, but she was playing a very active role long before that,” he said.

“She is a person of immense strength and character. Nothing seems to get her down.

“She has been a tireless worker for the Legion and the Poppy Appeal. Given her health problems down the years, it really is extraordinary.

“She is a force of nature and simply refuses to slow down. Long may that continue.”

And she was out and about last weekend, saluting the Fallen on Remembrance Sunday.