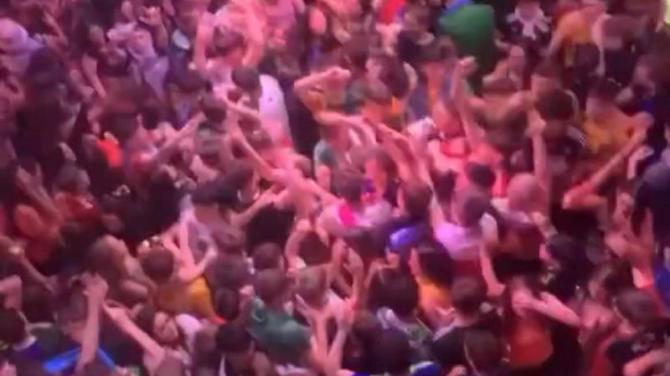 A RANDALSTOWN councillor has described as ‘horrifying’ the scenes from a teenage disco in Toome.

The Alliance rep said that a young family member was in attendance at the first ‘Teen Elk’ event at The Elk complex and has since tested positive for Covid-19.

As a close contact, Mr Finlay was forced to cancel a number of engagements.

It is almost three years since three teenagers were crushed to death at a teenage disco at the Greenvale Hotel in Cookstown on St Patrick’s Day 2019.

The event operates as a club night for teenagers under the legal drinking age, with a ‘mineral bar only’ policy in operation during the 8pm to midnight disco.

Tickets for the November 5 night sold out, with the organisers adding another date on November 19.

The Elk’s website states: “We have a full team of SIA trained staff with a dedicated first aid team.

“We also use crowd control barriers upon entry.

“We all work closely with the local council and police to ensure we continue to be Ireland’s safest teen event.”

However parents have complained that around 1,700 young people were in the complex and that the venue was overcrowded.

Councillor Finlay said: “I have been contacted by numerous concerned parents after the re-opening night of the Teen Elk and social media has been awash with similar complaints.

“To the The Elk management's shame, no one, including myself has had any response to emails and phone calls.

“Photos and reports show young people packed together like sardines, I have seen photos of bruising caused by crushing and there has now been an explosion of Covid-positive teens who were in attendance at the venue.

“I have been told that there were no sanitation stations around the building and heard of young people crying of fear as they were carried by a wave of human bodies.

“Given the events that happened up the road at the Greenvale Hotel, I am shocked that lessons have not been learned.

“I have asked the Elk to provide me with their legally-required risk assessment for the night in question but they have chosen to not respond to me nor acknowledge my suggestion to make the events safer, such as allowing teens entry in groups of 20 or 30 at a time to avoid crushing on the stairwell, as was reported on Friday night.

“I am not a prude and I want to see young people getting back to normality after a tough lockdown.

“Similarly, I don’t want to stand in the way of a business making a profit, but as I told the Elk, if they don’t make the required alterations, they may find themselves unable to put on events at all in the future.”

The PSNI said officers have received several reports of potential overcrowding at premises on Hillhead Road in Toomebridge.

“Upon receipt of these reports, police have been working with partners and other statutory agencies in respect of a multi-agency approach to the concerns raised.

“Keeping people safe remains our priority and anyone with concerns about public safety or potentially dangerous overcrowding should contact the police immediately.”