The pioneering Crumlin man who led the vaccine revolution 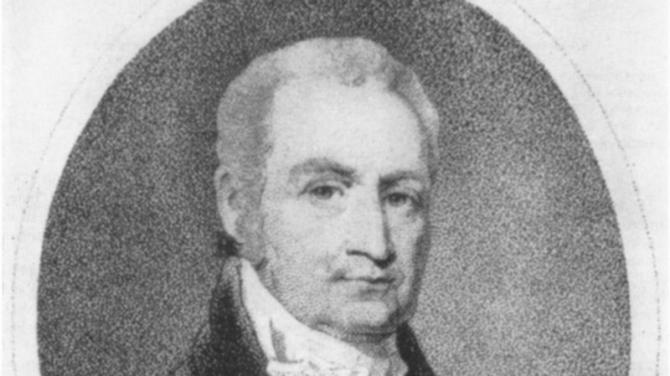 THE trail-blazing work of an 18th century scientist from Crumlin has been put under the microscope in a fascinating new book.

John Crawford was born 3 May 3 1746 at Ballytromery, but his pioneering work on the role of insects in spreading disease cast a long shadow far from these shores.

That in itself would be an impressive legacy, but he went further still as he was one of two esteemed medics who introduced the smallpox vaccine to the United States.

‘Irish Lives in America’ is a new collection of fifty biographical essays, drawn from the Dictionary of Irish Biography, which seeks to illustrate the experience of high-flying emigrants from Ireland, and their impact on American culture, politics and society.

But there was little in his background to suggest that this country boy would go on to carve out an indelible mark.

John was the second son of six children. His father Thomas was a Presbyterian Minister until his death in 1782.

John Crawford was educated locally, perhaps by his father, but in his late teens the bookish local lad is known to have attended lectures at Trinity College in Dublin.

Around this time he was apprenticed to a Dublin doctor, and between 1772 and 1774 he was surgeon on board the East India Company ship ‘Marquis of Rockingham’ on voyages to Bombay and Bengal. Records suggest that he also visited China and Saint Helena.

But these were far from idle travels to ‘strange lands’.

In 1772 he published an account of a liver disease fatal in hot climates, which may have been beriberi.

It is understood that he returned ‘home’ for a spell in 1778 and married Mary O’Donnell - but soon he was on the move again.

Crawford and his new wife went to Barbados on his appointment as surgeon to the hospital there. When a hurricane devastated the island in 1780, Crawford could have made a great deal of money from his surviving supplies of food and medicine, but instead gave them away to those in need.

His health broke down due to overwork and exposure, and in 1782 he and his wife and two small children travelled to England on furlough, but sadly his wife died on the voyage.

Crawford was forced to leave his children behind in England when he returned to Barbados in 1786.

In 1790 this early globe-trotter was on the move again when he became surgeon-major in Demerara, then a Dutch colony.

Four years later, on a visit to Europe, he took his Doctor of Medicine degree in the Dutch University of Leiden.

John O’Donnell, Crawford’s brother-in-law, sug gested that he and his children should settle in Baltimore, Maryland, and in 1796 he made the move.

And he found the new surroundings to his liking. There were, he said, ‘more of the branches of the families amidst of which I was born than I have ever seen since I left my native country’.

He befriended the famous doctor Benjamin Rush, and established a good practice.

He enthusiastically studied the natural history of his new environment, as he had done in the tropics; he had soon accumulated a wide knowledge of botany and entomology.

Even before 1794, when he discussed his ideas with the medical faculty in Leiden, he had come to the conclusion that insects at various stages of their lifecycles could be vectors of diseases in humans.

This in itself was not entirely new thinking. It had been suggested in outline by earlier authors, but a theory of the role of ‘animalculae’ in the spread of disease had never found any backing, as it was contrary to the then generally accepted doctrine that fevers and agues resulted from exposure to miasma or from simple contagion.

However, Crawford was first to suggest that insects were involved in the spread of the dreaded yellow fever.

Other medical men poured scorn on his novel ideas, and his practice and reputation suffered.

In 1804 Crawford started publishing a weekly magazine, the ‘Companion and Weekly Miscellany’, using the pseudonym of Edward Easy, and in 1806 transferred the editorship to his daughter Eliza, who thus became the second female editor in the United States.

In this weekly, retitled ‘The Observer and Repertory…’, he published during 1806–7 his ‘Theory and application to the treatment of disease’.

Some notice was taken of his ideas this time, but he found no adherents. Even in 1811, when he planned a series of lectures on the cause and treatment of diseases, he was not hopeful of convincing his opponents. But it was worth trying.

“My situation can not be made worse by it…My contemporaries may not thank me for the attempt; I know they will not: my great aim is to do good,” he wrote at the time.

“As long as life and health remain, I shall devote myself strictly to the performance of my duty.”

And history has shown that the local man was right to stand by his beliefs.

A number of palliative and curative measures for use in epidemic diseases, involving rigorous hygiene of the sickroom, were suggested by Crawford on the basis of his theory - and some are now established as routine medical practice

As well as his importance as a pioneer of a theory of insect-borne disease, Crawford is recognised as one of the two doctors who first introduced vaccination against smallpox into America.

In the summer of 1800, at the same time as Benjamin Waterhouse was also experimenting with cowpox, Crawford received vaccine from London, and apparently successfully vaccinated at least one person.

He published nothing on his vaccination work, but rejoiced in 1807 that smallpox had been rendered nearly harmless by the new technique.

Crawford was involved with other projects to benefit his fellow citizens in Baltimore.

He was one of the founders of Baltimore Library (1798) and of a Society for the Promotion of Useful Knowledge (1800) in the city.

He helped to establish a dispensary in Baltimore (1801) and a state penitentiary, and suggested improvements in training military and naval medical men.

He was consulting physician to the Baltimore hospital, an examiner in the Baltimore medical faculty, and briefly (1812) held a lectureship in natural history in Baltimore Medical College.

He was prominent in the city’s Hibernian Society, and was grand master of the Masonic Order in Maryland in every year but one from 1801 until his death, on 9 May 9 1813.

He was buried with Masonic honours in Westminster Presbyterian graveyard in Baltimore.

Crawford’s valuable and important library was bought by the University of Maryland at auction that same year.

The first major book purchase of that institution, it forms the nucleus of what is now known as the Health Sciences and Human Services Library.

She married first Henry Anderson, probably a relative, then left him and married Maximilian Godefroy, a noted architect.

Crawford lived with them from their marriage (1799) until his death.

Crawford’s son seems to have trained in medicine in London, but may have died of consumption before his father.

An extraordinary life, well-lived - but after a productive 67-years, he left behind a legacy that changed the course of medical science.

Quite an achievement for a man who never forgot his country roots in the rolling fields of Crumlin.