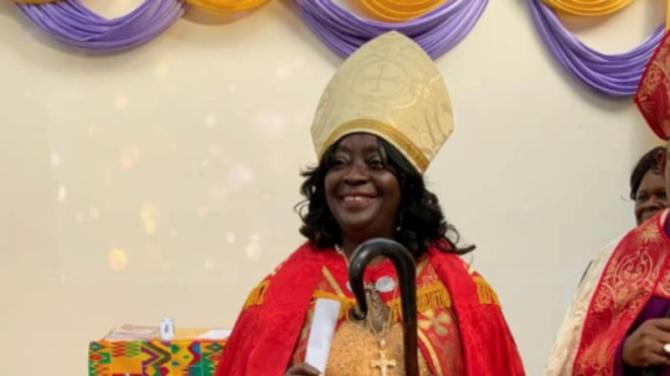 A NEWLY consecrated Bishop, who runs a church on the outskirts of Antrim says that she hasn’t been fazed after a bus she was travelling on that evening was hit with stones in Belfast.

The police say they are treating the incident as a racist hate crime.

Hilda Abban was consecrated in Crumlin on Saturday to the office of Bishop by Bishop Dr David Oronsaye and Pastor Robery Dazdie.

She oversees The Rock Family Chapel Ministries, established in Accra, Ghana in 2010.

There are branches in Crumlin, in Awoshie, Accra Ghana and Badwiase in the Central Region of Ghana.

The church, based at Nutts Corner Enterprise Park, offers refuge for vulnerable people in the community, including people fleeing arranged marriages, future female genital mutilation or forced religion and refugees and asylum seekers.

There are also services for orphans and widows, prisoners and ex-offenders and provision of Christmas gifts and hot meals .

During Covid-19, members of the church played their part in their neighbourhoods, supporting the vulnerable and front line workers.

Similar services are offered in Ghana, as well as support to rehabilitate those with addictions and for HIV sufferers, providing education, vocational training and employment for people on rehabilitation programs.

After the celebration on Saturday, the party of clergy and parishioners then went for a Chinese meal in Stranmillis, before visiting Belfast landmarks including the Peace Wall.

It was their that their bus came under attack.

Bishop Hilda, who lives in Randalstown, said that while her special day was not spoiled by the incident, it was disappointing for the Northern Ireland hosts, who had promised visiting English dignitaries that violence in the city was a thing of the past.

“It was a very special day for me and one which I will never forget, it was full of celebration and happiness,” said Bishop Hilda.

“I will not let what happened in the evening spoil my memories.

“Some of the English visitors were scared and shaking, and it was unfortunate because we had assured them that Northern Ireland was a peaceful place and nothing bad would happen.

“Luckily the window on the bus was just smashed and not broken, no one was hurt, everyone recovered and we were able to enjoy the rest of the weekend.”

She said that her church welcomes and includes people of all nationalities and that there is ‘lots of singing and dancing’.

“It is a gospel church and we welcome everyone,” she added.

“I am delighted to have been appointed and look forward to further serving the people of the local area in future.”

The police said no-one was injured in the attack on Cupar Way.

The bus is owned by the Six Counties Bus Preservation, a community interest company who specialise in vintage vehicle events and workshops.

Company owner Nigel Glenholmes said the window could cost £2,000 to replace, but the double glazing may have prevented injury or further damage.

He said that it was ironic that the vehicle was attacked at the Peace Wall.

“After a lovely afternoon, wanting to show of the place and telling all these respected guests that we were going to see the Peace Wall, the bus was hit by a brick, you couldn’t make it up,” he said.

“The window did not break luckily, but the bus is off the road now, and we are supposed to be teaming up with The Junction to run a shuttle bus to their Christmas events, so the timing is not idea, but hopefully we will be back on the road soon.