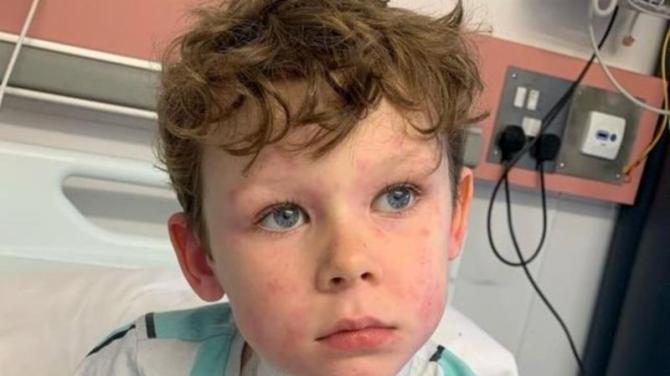 THE mother of a young boy currently waiting for a bone marrow donor has thanked the pupils of Mount Saint Michael’s Primary for cheering up her son after he had to spend his birthday in hospital.

Young Olcán Wilkes was supposed to start at the Randalstown school in September after his family moved to the area in summer, but weeks after their arrival he was diagnosed with aplastic anaemia and is now reliant on blood transfusions.

Because of his weakened immune system, he has to spent most of his time isolated and celebrated his birthday at the Royal Victoria Hospital for Sick Children last week.

Despite not yet meeting any of his classmates, teachers arranged for them to send him a handmade birthday card, with a picture of each pupil, so that he would know who it was from.

“It was such a wonderful thing for them all to do and really brightened up what could have been a very difficult day for him, it was lovely to see the smile on his face.”said Mum Genevieve.

She has also told of how local people have offered to bring her food and do her washing while she keeps her son company in Belfast.

With no matches for Olcán on the 28 million-strong global bone marrow registry, she is also calling for local people to sign up and become a donor.

Mount St Michael’s Primary School has also helped organise a blood donation session at St MacNissi’s Church Hall in Randalstown on December 3 from 12.30 pm to 4pm and 5pm to 7pm.

For full story, turn to page 4.