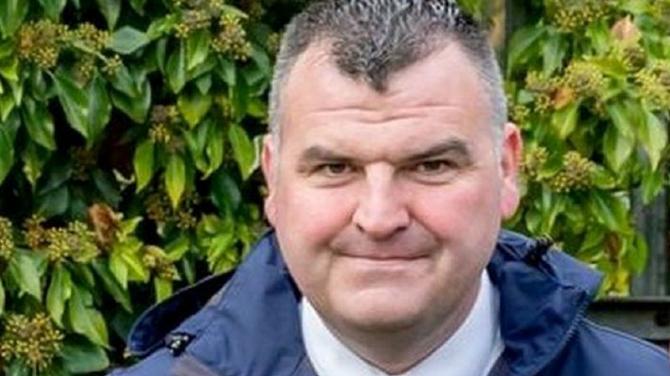 THERE has been shock and sadness in Antrim after the death of a school principal whose car was struck by part of a falling tree as Storm Arwen raged through the borough.

Father-of-four Francis Lagan is understood to have been travelling along the Dublin Road with his wife and children during strong winds on Friday afternoon.

On Friday, it was announced that emergency services had responded to a ‘serious incident’ in Antrim after a tree fell on a car travelling on the Dublin Road in the town, leaving several people trapped inside the SUV-type vehicle.

Crews from the Northern Ireland Fire and Rescue (NIFRS) used specialist hydraulic equipment at the scene to free the surviving family members.

Police closed the Dublin Road between the junctions with Oldstone Hill, Tirgracy Road and Deerpark Road.

It was later announced that a man had died.

South Antrim MLA, Declan Kearney said: “I was shocked and very saddened to learn about the death of a motorist after a tree fell on his car while travelling along the Dublin Road in Antrim town on Friday evening.

“The victim of this tragedy, Francis Lagan, was a highly respected South Derry school principal, who made an immense contribution to the community which he served.

“Francis was a renowned Maghera educationalist and civic leader.

“My thoughts and sympathies are with his family, school colleagues and students, and the wider community of Maghera, where he was held in very great regard.”

Mr Lagan’s school issued a statement, saying: “The Governors, pupils and staff of St. Mary’s Glenview are shocked and deeply saddened by the sudden, tragic death of our much-loved Principal, Mr Lagan.

“His kindness, dedication and commitment to staff and pupils will be sorely missed.

“Our heartfelt sympathies are with his wife Louise, children Rose, Alice, Beth and Frank, his father Brian, sisters Roisin, Maura, Anne and Brenda and the wider family circle.”

Mr Lagan was husband to Louise and father of Rose, Alice, Beth and Frank.

He is also survived by father Brian and sisters Maura, Anne and Brenda.

His funeral was to take place from his home for Requiem Mass in St. Patrick’s Church, Glen before interment afterwards in the adjoining cemetery.

Former SDLP Mayor of Antrim Oran Keenan, while not apportioning any blame in terms of the fatal accident, said that the incident highlighted a wider issue.

He lives on nearby British Road and offered his condolences to Mr Lagan’s family circle.

“I am very sad to hear about this tragic death.” he said.

“Someone needs to be taking stock of the state of our trees, so many roadside trees are choked with ivy.

“Unfortunately we do have death on our roads for one reason or another, but every landowner who has trees fronting roads or footpaths need to be doing an annual check.”