'Lady of the Chimney Corner' - the movie? 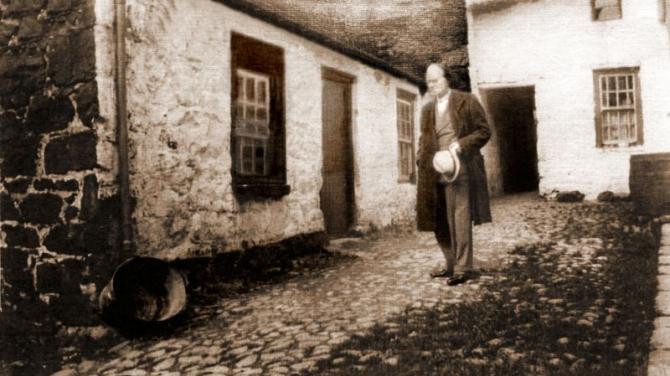 ANTRIM folk will have grown accustomed to the eye-catching mural to Alexander Irvine, situated lovingly beside his childhood home at Pogue’s Entry.

The famed writer, admired globally for his work, has been held in particular esteem for his moving tribute to his mother, 'My Lady of the Chimney Corner' - his moving paean to the victory of love over abject poverty in downtown Antrim.

Capturing life in the late 19th century, Irvine's work has been adopted into various mediums.

Yet, a film has never been made of his flagship novel... Or had it?

A clipping from an English newspaper dating back to September 1935 suggests quite the contrary!

Heavily hinting at the possibility of ‘My Lady of the Chimney Corner’ screen adaption, the clipping has left many scratching their heads.

It appears that the notion was first floated by the Aberdeen Association following an appeal by London Film Productions Ltd. for suggestions from the British public concerning suitable material for films.

The possibility at that time was not entirely out of the question, either.

Dr. Irvine had publicly went on record to declare that he had turned down two big bucks movie deals from Hollywood due to the fact that they aimed to caricature one of the characters within the book - namely his father.

Understandably, the novelist felt that integrity and loyalty towards his family held more weight than the big screen and refused the offers.

The English paper report went on to tell of a lecture given by Dr Irvine in East and Belmont Church Aberdeen, in which his subject had been ‘Great men I have met in fifty years’.

The event had been the talk of the town, with so many turning up that the meeting had to be transferred from the hall to the church building itself!

Chairman Ishbel Marchioness commented that it was difficult to know just how to introduce the Antrim man, given the myriad of roles he had served within in his life.

“He has filled so many different positions,” Marchioness said.

“He has been a newspaper boy, an elevator boy, a miner in the South of Scotland, a pageboy, and a soldier.

“He graduated at Balliol College, Oxford, and he graduated also in America. He became a missionary, minister of one the leading churches in New York, and then a professor.”

During the talk, Dr Irvine referred to Shakespeare’s works, questioning whether or not he believed that man is ever born great - rather, he believed that greatness was thrust upon men and gave reference to the previous three Presidents of the United States.

He continued to talk of the many great men he had met and the subsequent influence they had held upon his own life.

In reference to meeting the then King, Dr. Irvine ended his lecture by describing His Majesty as the ‘chief’ of the great men he had met in half a century.

Alexander Irvine may have turned down the bright lights of Hollywood, but led a life fuelled with the glow of inspirational men.

I wonder if anyone will make a film about it? Hmmmm...