28 million bone marrow donors and not one match for Olcán - could it be you? 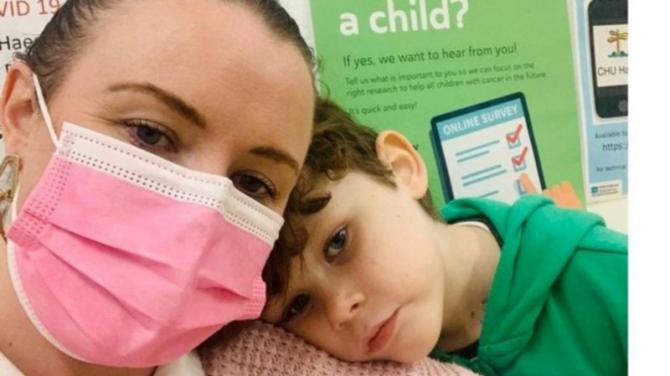 WHEN Genevieve Wilkes and her young family made the move to the Antrim area during the summer to enjoy a quieter pace of life, she had no idea what would lie ahead.

She registered with the local GP in Randalstown, settled in the kids’ ponies and sent eldest boy Olcán, aged six, off to a soccer camp in Belfast.

The Dublin native had lived for a time in Gloucestershire with her husband Sam before getting a new job and relocating.

Sam stayed on at his job in England to make sure that everything was working out before he made the move to Antrim too, and was looking forward to joining his family.

“I was able to do the job no matter where I lived, I thought Northern Ireland was the ideal compromise, as we were still in the UK yet close to Dublin and England too,” said Genevieve.

When Olcán returned from football one day in August with a deep bruise on his ankle, Genevieve thought another child had carried out a dirty tackle.

Another fall which she witnessed seemed innocuous, but Olcán cried out in pain and his arms ended up ‘black’.

And when he stumbled from play equipment in the park onto rubber matting, yet still came up in a dramatic bruising, she knew something was wrong.

Her son also began to suffer nosebleeds, including seven in one day.

“I had only signed up with the GP three days previously and thought they might not take me seriously, but I rang up to make an appointment and they saw him straight away.” Genevieve explained.

Blood tests were taken at 10am and by 3pm, she received the phone call that every parent dreads.

Olcán’s blood cell and platelet count were dangerously abnormal and she was advised to get her son to the Royal Victoria Hospital as soon as possible.

“Being told to ‘pack a bag’ was something I will never forget,” she said.

“Our lives changed in an instant.”

Initially checks were carried out for leukaemia, but after several bone marrow biopsies, the boy was eventually diagnosed weeks later with aplastic anaemia, a condition that occurs when the body stops producing enough new blood cells.

As well as being fatigued, Olcán is also prone to infections and uncontrolled bleeding and is currently dependant on blood transfusions to stay live.

At one point the brave six-year-old underwent 30 blood transfusions in just ten weeks. He is also receiving an immunotherapy, treatment, which has a long list of side effects.

“With leukaemia, it is more of a known quantity in terms of symptoms and treatment, but aplastic anaemia is something completely different.” said Genevieve.

“At the moment he is dependant on blood transfusions but what he really needs is a bone marrow transplant.

“There are no matches in the family and after searching the global database, which has around 28 million members, there is no match there either.

“So we are desperately seeking new donors who can help Olcán, as the treatment he is getting now is taking its toll and he cannot go on like this forever.”

While some children are born with the condition, it is thought that Olcán acquired it, after a virus made his immune system go into ‘overdrive’.

While Genevieve is full of admiration for her son’s bravery, she is aware that he is suffering both mentally and physically.

“I take it for granted because he is so brave, he has had so many needles in him, he just holds his arms out and asks ‘which vein do you want?’

“But because of his condition and Covid, he is very vulnerable, this has been very isolating for him.

“He is in a new country and hadn’t even got the chance to start school yet, so there have been very lonely times for him.”

However she says that the hospital, community and Randalstown primary school Mount Saint Michael’s, can’t have done enough to help her family.

“The staff and other patients here are brilliant,” she said.

“The Royal Hospital for Sick Children has such a caring atmosphere and eveything is done to make sure the kids and families have as little to worry about as possible.

“I try to be here all the time for him and everyone is so supportive.

“Every morning I wake up to messages from strangers, wishing us well.

“People I don’t know are offering to do my washing, bring me food and offer respite.”

While Olcán had to spend his birthday in hospital last week, his new school made sure that he had a special day.

Genevieve explained: “We were hoping he would be able to get home for his birthday but the doctors were not happy with some of his test results.

“The school organised for the children to send him birthday cards.

“I thought it was a nice gesture, but he wouldn’t have known who any of them were.

“To our delight, every single card had a picture of the pupil who made it.

“It was such a wonderful thing for them all to do and really brightened up what could have been a very difficult day for him, it was lovely to see the smile on his face.”

Genevieve said she is full of praise for the hardworking staff of the NHS.

“I know waiting lists are long, but I am staggered at how quickly this has all happened,” she said.

“I am from Dublin where you have to pay to see your GP.

“From the moment I stepped into the surgery in Randalstown, the wheels were in motion, we got the blood test results that day and he was in hospital by the afternoon.

“Every test and procedure that could have been carried out, has been done, they have left no stone unturned trying to get to the bottom of everything and help him feel better.”

Now Genevieve is throwing her efforts into encouraging as many people as possible to join the bone marrow registry.

“The doctors were convinced we would find a bone marrow donor easily, his little brother Hunter was not a match, neither were we as his parents, but we were devastated to learn Olcán has a rare tissue type meaning a match was not available for him on the entire global database.

“I want to encourage people to become bone marrow donors, not just because we desperately need one, but others are suffering in this way.

“There is a little girl in the hospital who is seven years old, who has been dependant on transfusions since she was three months old.

“My husband and I signed up years ago as we knew another family who were going through this and I never in a million years thought we would be in this position too.

“I also want to raise awareness of the absolute importance of blood and platelet donors, without whom Olcán would not be with us right.

“I also want to raise awareness about blood and platelet donation, these are so important.

“There are so many ways that blood products can be used to help others that I was never aware of before.”

Mount St Michael’s Primary School has also helped organise a blood donation session at St MacNissi’s Church Hall in Randalstown on December 3 from 12.30 pm to 4pm and 5pm to 7pm.