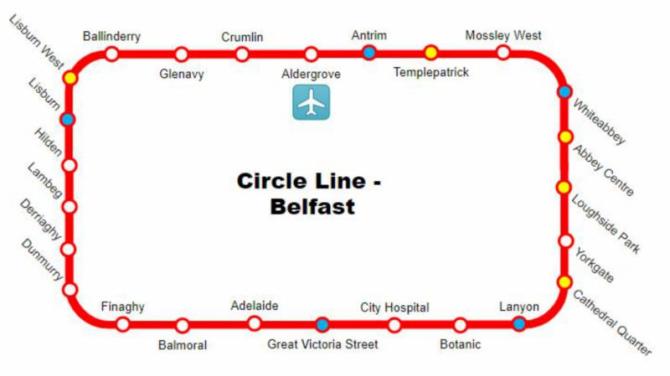 AN innovative proposal to link Antrim, Templepatrick, Crumlin and the Airport to a new ‘Circle Line’ around Belfast appear to be gathering steam this week.

Thousands have already signed a petition to the Department of Infrastructure, calling on the Minister to end ‘decades of decay and neglect’ by backing a new line joining 25 locations around the Belfast Metropolitan Area.

Antrim man Aaron Vennard firmly believes that the plan would revolutionise public transport and drive more cars off the road.

Through his work in Financial Services, he has seen how cities like New York, London, Toronot and Chacago have attempted to ‘sustainable transport’ their way out of the traffic logjam - and he is confident that the Circle Line could do the same here.

“I can drive but have never owned a car, mostly because I am a terrible driver, but also put me on a train with a newspaper in hand and I am pretty content,” said Aaron.

“My mum worked for Ulsterbus and my grandfather was a train driver - that’s how he met my grandmother - so I’m pretty wedded to train and bus, but at times also held to ransom. No one likes to wait in the wet and cold.

“I worked at the International Airport for five years so I knew all too well when finishing work late at night it was somewhat of a pilgrimage getting home or heading to Belfast for University, often requiring my parents to pick me up after every shift.

“In 2019 the Airport had over 4,000 staff, not all with access to a car, and for many they must squander the first hour of their salary on a taxi or the airbus.”

He concedes, however, that he was more lucky than most.

“Living in Antrim, I’m spoiled for public transport with a bus station and a train station, but what use is a train station if there is only an hourly service to Belfast?

“The Derry line, which Antrim is on, has the largest catchment area yet the worst service.

“Translink often runs campaigns encouraging us to use the train or bus to come into Belfast to avail of the night time economy, but with limited timetables on the Derry line one must leave immediately after the starter has arrived or immediately after the gig and head home for last service.

“Even if there was a midnight train to Derry, I doubt many from Derry would be willing to make the two hour journey home, arriving in the wee hours. But I do believe that those in the commuter belt/Circle Line catchment area would.”

And that’s the kernel of the proposal.

“The idea is that services would run every 15 to 20 minutes in either direction from 6am to midnight with new stations at Airport, Templepatrick, Abbey Centre, Loughside Park, Lisburn West, which is currently being built with Park and Ride, and reopening stations on the Knockmore line,” explained the local man.

“The Circle Line would act as local, with other branches going express. For example the Portadown to Lisburn train would no longer stop at Balmoral as that would be served by Circle.

“The Knockmore line closed almost two decades ago but the stations and track are still there. The track is still used by Translink for shuffling stock and training.

“Yes, the stations would need a bit of a lick of paint, but that would not be a major job.

“The Airport would need a new station at British Road, with a shuttle bus for last kilometre.”

There would, of course, be some technical challenges.

“Complications exist on Bleach Green line which is single track and of third world standard.

“New stations and loops would need to be built to prevent a bottle neck for Express services to Derry and Larne. But these are not show stoppers in terms of engineering.

“This is not purely an Airport Line but a Circle Line serving the commuter belt that happens to have an Airport Stop.

“Many households do not have access to a car, so this would be a game changer for many going to the Airport, shopping at Abbey Centre, getting to Windsor Park for games, city centre night life and work.

“Couple this with Belfast’s chronic traffic issue and it's a no brainer.

“Provide a regular Metro service, take thousands of people out of their cars, reduce traffic for haulage, attract external investment, reduce air pollution - and fall in love on the train like my granda and granny!”