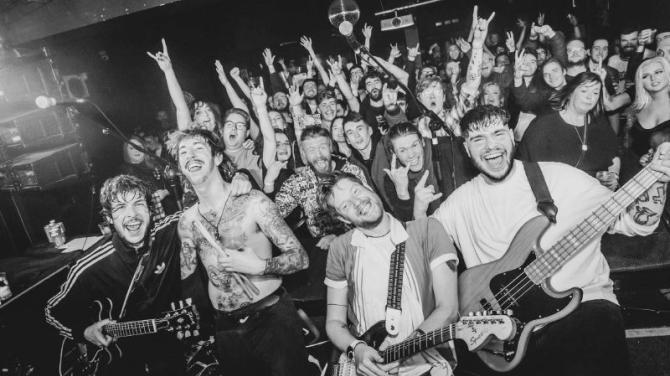 Red Eye Pariah is playing a huge gig in the Ulster Sports Club in Belfast supporting Princess Goes to the Butterfly Museum.

The band is led by singer Hall, the Golden Globe award winning actor who plays Dexter, starred in Six Feet Under and was the lead in the late David Bowie’s stage musical Lazarus.

He is joined by drummer Peter Yanowitz, who has played in The Wallflowers and with Andrew W.K, Yoko Ono and Billy Bragg and keyboardist Matt Katz-Bohen, who has worked with Blondie, Cyndi Lauper and Boy George.

“We never set out to start a band,” said Yanowitz.

“It feels more like the band started us. Some of the best moments in art, though, are the ones you don’t plan for.”

Their music is said to include everything from distorted synth rock and ethereal electronics to dreamy folk and R&B.

Meanwhile, Red Eye Pariah describe themselves as ‘an indie rock/rap four piece with an added twist’.

Formed during a pandemic lockdown in April 2020, drummer Joe Dawson arranged practices with guitarists and vocalists Sammy Stevenson and Deano Kelly as and when restrictions allowed.

The trio recorded two debut singles “Kamikaze Kid” and “The Score” in Manor Park Studio with Neil Calderwood, which were released in early 2021.

After social media following picked up, the band took part in The Antrim Festival Livestream.

Attention has only grown, leading them to announce and sell out their debut headline show at Voodoo Belfast on November 4.

With the gig sold out, the band thought it was the perfect time to release their latest single “At The End of The Day” which is now available on all streaming platforms.

The music video for the single was shot by Mark Robinson in the historical Riddell’s Warehouse in Belfast.

“At The End Of The Day” has been well received, spawning interest from Chordblossom and BBC Introducing.

On November 1 the new single was broadcast on the BBC Radio Ulster airwaves as a World Exclusive during the Across The Line Introducing show with Gemma Bradley.

They then played at Fibber Magees, Dublin with Ice pop, Lime Tree and KLDD

Joe Dawson, Red Eye Pariah’s drummer, took time out from gigging in Dublin last week to speak to the Antrim Guardian about the forthcoming show.

“We are buzzing about this opportunity and we cannot wait to play this gig,” he said.

The concert was secured through a booking agency and the Antrim band has already spoken to the American group’s manager.

“We had heard of them and obviously were all fans of Michael C Hall, but the other guys are also really accomplished musicians so it is a real honour to be supporting them.

“We just hope we don’t get too starstruck!”

“We were all in bands before Covid happened but they all pretty much fizzled out with no gigs and not being allowed to meet and with venues being closes.

“We all knew each other and got in touch during lockdown and talked about forming our own group.

“The music scene in Antrim has faded away a little compared to what it was in previous years, but people like Alan Boal and his Johnny B Goode’s venue and his music nights have been really good.

“We had our first gig together at Voodoo in Belfast and it was an amazing night, it sold out and it was so good to be back on stage and see the reception.”

Joe reckons that having been starved of entertainment for so long, audiences are keen to get back out there to watch live music.

“It used to be that you would beg your mates to come to a gig, now they are begging us for a spare ticket.

“I think people have realised what they were missing and really want to get out there again and experience live music.

“We write and perform our own songs, we do some covers but we definitely put our own stamp on them.

“We have been trying to branch out a bit and this gig will hopefully give us a lot of exposure and get the right people noticing our work.”

Tickets for the event can be found on Eventbrite and more information about Red Eye Pariah and Princess Goes to the Butterfly Museum can be found on Facebook and Instagram.