Circus comes to town this Christmas - in miniature 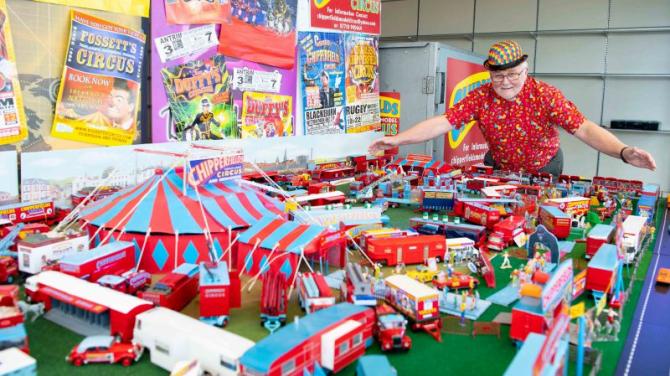 A CLERGYMAN who grew up dreaming of becoming a circus performer is displaying his hand-built model of the famous Chipperfields’ big top show at The Junction this Christmas.

Reverend Jack Moore from Antrim Methodist Church may have swapped clowning for a cassock, becoming chaplain for Holywell Hospital and Antrim Area Hospital, but still built up the impressive display from scratch after being spellbound by the travelling spectacle 45 years ago.

The town’s answer to Patch Adams has already exhibited the project in England, Scotland, Northern Ireland and the Republic and in April he hopes to take it to the Netherlands for a tour.

James Chipperfield founded the circus with his performing animals at the Thames Frost Fair of 1684. It became one of the biggest in Europe, with a tent that could hold 6000 people. Jack saw the circus as a child and was inspired to create his own version.

“It was just something I was always fascinated with and I wanted a hobby!” he said.

“It’s a long story about how I made my way into the ministry, having grown up wanting to join the circus, I did a bit of clowning for the young patients in the childrens’ ward at Antrim but obviously that cannot happen right now because of COVID.

“So I was invited to display the circus at The Junction for people to enjoy.

“This is a hobby of mine and have been working on it for about 60 years.

“I have exhibited it in Scotland, England and Southern Ireland.

“People are very happy to see it and I am happy that it is giving people a little lift during a very difficult time, it is a little smaller than the real thing but hopefully it can bring a bit of cheer.”

The exhibition opened at one of The Junction’s units on Friday and will be available to see until Christmas.

Donations will be put towards a number of charities which the shopping centre is supporting this year.