Chronicling the Borough's Fallen was a 'labour of love' for Fraser 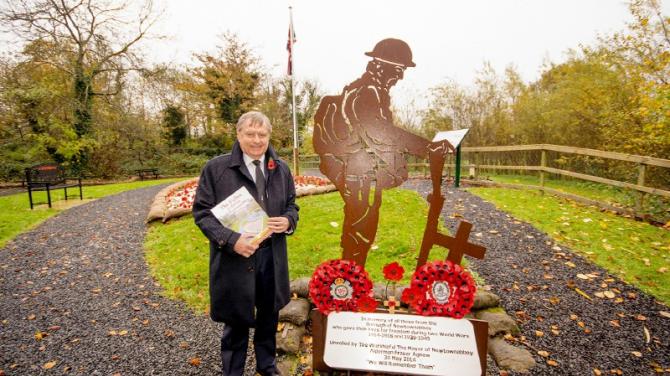 THE problem with being an historian is that you need to have a fair bit of time on your hands to delve into the past.

Just ask Alderman Fraser Agnew, who has spent the better part of a decade compiling ‘The Fallen of Antrim and Newtownabbey 1914-1918’.

It was, he said, a ‘true labour of love’ - and it certainly shows as he casts a compassionate light on the 725 locals who marched to an early grave during the Great War to protect the freedoms we hold so dear.

It was undoubtedly a massive undertaking, but generations to come will thank him for his diligence.

Alderman Agnew has juggled his burning interest in history with public service for decades now - and much else besides.

As well as a writer, he has served as an architectural draughtsman and a soccer reporter. Even in his late 70s, he still plays a bit too!

He entered politics in 1980 when he was elected onto Newtownabbey Borough Council and since then he has been Mayor twice. Down the years he has also served as an MLA and was made a Freeman of the Borough. Uniquely, he also has a day named after him in Gilbert, Arizona.

But throughout it all, the First World War has remained an enduring passion.

His deep knowledge has made him a popular tour guide through the battlefields of France and Belgium, and his standing was such that he was involved with archeological digs in Thiepval Wood, where the 36th (Ulster) Division initiated its attack on the German Lines in 1916.

That experience served him well when he oversaw the design of a replica trench in the grounds of Mossley Mill. Earlier this year, in honour of his long service, the council placed a bench in the Memorial Garden emblazoned with the message ‘Lest We Forget’.

The new book is not his first chronicle of local people at war.

Back in 2009 he published ‘Newtownabbey’s Fallen’, but he was never one to rest on his laurels and soon began planning his next project.

At first he considered an exhaustive study of all the service people from County Antrim who paid the supreme sacrifice, but with some estimates suggesting that could involve upwards of 3,000 souls he decided he had no option but to limit his canvas.

But with the merger of Antrim and Newtownabbey he struck upon the idea of sharing the stories of all the local heroes who fought and died - and the hard work began in earnest.

He is the first to admit that the ambitious project was challenging at times, but ultimately it has been a long but rewarding journey. The meticulous research has culminated in a work that will stand as a lasting monument to the men prepared to lay down their lives for King and country.

“They had left the mill villages, like Kilbride, Cogry, Doagh, Mossley, Whitehouse, Whiteabbey, Hydepark, Whitewell, Muckamore and Crumlin,” he said.

“They exchanged life in towns such as Randalstown and Antrim and surrounding farms for the flood plains of Flanders and life in damp and rodent-infested trenches.

“Some were farm workers, others were labourers and joiners on building sites and from the mills. There were boiler-makers from the shipyard and professional people like architects and accountants.

“Thousands of those who joined were Orangemen, others played rugby at senior level and there were Irish League footballers.

“Some were little more than boys. Three of those from the Newtownabbey area who lost their lives were just 16-years-old.

“Others were sons of the Manse ad politicians. Eighty Orangemen from the Cloughfern District joined up. One was awarded a Military Medal and five never came back.

“Was their sacrifice in vain? Before, during and after the war and through to the present day the people of Ulster have not been treated well by successive governments. Throughout history the price for freedom and democracy has been costly.

“It is the duty of this generation to ensure that the memories of those who paid the supreme sacrifice in war should not be forgotten.

“They were volunteers for death and glory - and this book is dedicated to them.”

Dr Agnew cuts through the cold statistics with all too human stories of valour. Each meticulously researched entry includes information about where each of the Fallen were born, the family they left behind, who they served with where their war ended.

Many also include photographs - faces of young men lost in the mists of time.

Over the 336 pages, it is impossible not to be moved.

George Ayer from Doagh was a chauffeur by trade, but he died on August 26 1914 just weeks after Britain declared war on Germany. He was 27.

Sadly there were many more to come.

Edward Clarke from Killead had risen through the ranks to Second Lieutenant and though he was barely 25 he had already seen heavy action by the spring of 1917.

The 9th King’s Royal Rifle Corp record for March 5 of that yea includes this dramatic account: ‘This tour was noticeable for two facts, one of which was the increased activity of the enemy with regard to artillery and also movement, and the other was the excellent patrols carried by two officer. 2/Lieutenant Clarke did two good patrols and was lucky to escape being laid out, on both occasions getting behind saps which were held’.

Just over a month later, on April 9, Edward - the son of Rev Canon John Clarke of Killead Vicarage - was killed in the Battle of Arras when he bravely led his soldiers in an attack.

Some families lost more than one son. James Kernaghan, from Oldstone in Muckamore, served with the Royal Irish Rifles but was killed on March 21 1918. His brother John died from gunshot wounds to the head and chest on October 1 that same year.

Others died far from the battlefield. Hugh Kielty, from Cranfield near Randalstown, had been awarded the 1914-15 Star, the Victory Medal and the British War Medical, His body was found in Hendon Dock in Sunderland on December 27 1915. He had accidentally drowned.

Alderman Agnew has also published letters from the Front.

William and Johnny Logan had joined the Ulster Volunteers before enlisting with the 11th Battalion Royal Irish Rifles in Antrim.

By 1916 they were in the trenches, serving side by side. In a letter to their sister Maggie on March 27 William expressed thanks for socks sent from home. He added that he had given a pair to his brother.

But by September 2, the mood had darkened.

‘There is no word about Willie, he is a long time missing now’, wrote Johnny.

‘I wonder if he will turn up, he might but I am doubtful about him’.

William never did turn up. He died on July 1 at the Somme and is remembered with honour on the Thiepval Memorial to the missing.

There are also letters of condolence. Dunadry man James Walker, who had played football for Linfield, was killed in action on May 6 1916. Lieutenant SH Monard wrote to his heartbroken parents, John and Mary.

‘It is with great regret, but extreme pride, that I write to give you details of the death of your gallant son on the morning of the 6th May.

‘Private Walker was, with a comrade, responsible for holding a most important forward trench in our line, the insertion of which would to a certainty have meant the loss of a portion of our sector.

‘During two hours’ bombardment your son stuck to his post under a storm of high explosive shells, until finally a flying fragment struck him. He remained conscious and cool, and his wound was hurriedly dressed. The loss of blood, however, was tremendous and he died on his way to hospital.

‘Private J Walker was a most popular man in our company. He was a sportsman, and particularly a good footballer. His brilliant play was the delight and pride of all ranks.

‘Frequently he saved his company from defeat at football, and undoubtedly on the morning of the 6th May he assisted materially in keeping the flag flying.

‘Your sorrow will be intense; but I want to ask you to take comfort in the fact that he die a glorious and heroic death. We have the greatest pride in his achievement and in D Company, his own company, his name will never be forgotten’.

Fraser said he enjoyed extending his research beyond his native Newtownabbey.

“I found the Antrim story really intriguing,” he said.

“The big landowners like the Massereenes and the O’Neills played their part in the war effort. The camp out at Randalstown had 5,000 soldiers billeted there at one time.

“Each of them has their own story to tell - and during my research I came across so many poignant and very sad stories.

“There were some strange ones too. One soldier from Northern Ireland was at the front and he later revealed that he had recognised one of the Germans. Apparently they had worked together in a hotel in County Down before the war. What are the chances of that?”

There have been no shortage of plaudits for the new book already, including one from former Mayor Jim Montgomery.

“With the completion of this book, the sacrifice of ‘The Fallen of Antrim and Newtownabbey’ will never be forgotten and this outstanding piece of research ensures we can remember the sacrifice of those who have enabled us to enjoy the freedoms we have today,” he said.

“I encourage you all to reflect on the sacrifice of our ancestors who over a century ago fought for our freedom and were sadly lost in doing so.

“Their legacy lives on thanks to Fraser’s dedication to the publication of this unique record.”

So what’s next for Alderman Agnew? World War Two, perhaps?

The book, which was published with financial assistance from Antrim and Newtownabbey Council, costs £15.

It is available to purchase at the Gift Shop at Clotworthy House and it can also be pre-ordered by telephone T: 0300 123 7788 or by email: culture@antrimandnewtownabbey.gov.uk for collection at both Mossley Mill and Antrim Civic Centre.