From starving in squalid conditions, to a life of luxury - ten years on, what happened to the Lisnevenagh ponies? 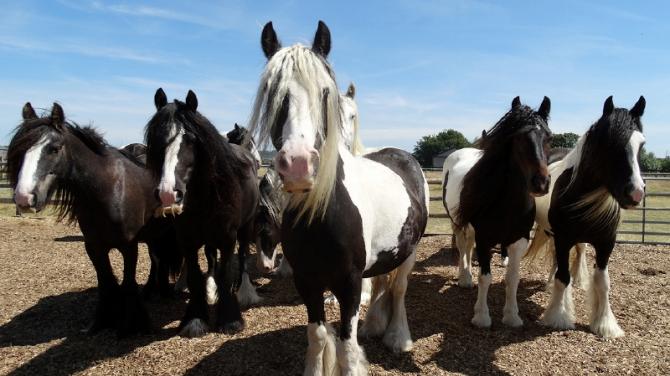 IT may have seemed like an easy money-making scheme.

Gather up cheap horses, ponies and donkeys, let them breed, then, when there was a lorry full, drive them to the market.

There waiting would be the ‘meat man’, looking for easy pickings to slaughter and sell into the European food market, where eating horse is often the norm.

But, while easily enough to acquire, horses and ponies are expensive to keep and feed, with each one costing several thousand a year to maintain properly.

That wasn’t a concern for father and son Robert and Conor McAleenan, who’s only priority was profit.

As the equines gathered up in the fields and barns around their ramshackle farm on the Lisnevenagh Road, conditions worsened.

The food ran out. The ground became swamped. Waste piled up. The wind began to bite.

Scores of motorists passed by every day on the ‘Antrim line’, oblivious to the horrific scenes that were developing just out of their sight.

But one keen-eyed animal lover could see that something was wrong - and they would not take no for an answer.

Meanwhile, by November 2011, Crosskennan Lane Animal Sanctuary volunteers thought they had seen it all.

Already that year, in just a six week period, they had dealt with a situation in Mallusk - where a large number of horses were found starving, with crows pecking at their open wounds - and another incident in Coleraine.

But now, just another eight weeks later - they faced their largest multi-horse rescue to date. And when they accompanied the PSNI to the farm just outside Antrim town, they felt as if they had stepped into hell.

“The first thing many who were there will remember was the smell, the stench of dead and decaying animals.” said a spokeswoman for the charity.

“The scene was one of horror; the dead lying in heaps while the dying stood around in filth. There was no question those still standing were dying; with no food or water present. We contacted Redwings Chief Vet and Head of Welfare, Nic de Brauwere, who flew to Northern Ireland to oversee the case and gather veterinary forensic evidence.”

Nic later admitted that the conditions he witnessed in Antrim were as bad as anything he had seen in 20 years working in horse welfare.

“These animals were effectively starving to death in the most dire of conditions - there was no clean bedding, no water and nowhere for them to move around,” she said.

“Live animals were being forced to live next to the rotting carcasses of other dead animals. No animal should be made to endure such horrendous cruelty. Every officer who attended has been affected by what they saw.”

In total there were 63 living horses, ponies, and donkeys; all of varying degrees of neglect and abuse; emaciated, covered in faeces and urine as they were lying on their own waste. Many were only upright because of the walls or fences.

One pony was severely underweight, its spine and pelvic bones visible among the wounds, scabs, and scars. There was significant muscle wastage and their guts were compacted due to worms.

Even with the efforts of the team and the vets involved, the only option was to put them to sleep and end their suffering.

A further three were beyond the point of recovery and were humanely put to sleep too. A total of nine individual equines bodies were identified among those left to rot..

The Crosskennan spokeswoman added: “It truly was one of the worst cases of horse cruelty we have personally ever witnessed and the sights remain with us to this day.

“The surviving horses all came out of the darkness, with a zest for life and forgiveness of people; although it was earned not given freely. Twenty-three were transferred with our thanks to Redwings in England and the donkeys were all taken in by the Donkey Sanctuary. It was a team effort that allowed us to save so many and give them a chance at a full and happy life.”

Of those rescued from Lisnevenagh, there are two remaining at Crosskennan, and will live out their days there.

Tansy and Tamma had been rehomed a number of times since they were first rescued alongside their mothers Ellerie and Emily, but will now remain with the Sanctuary permanently.

Others include Blakeney, who now lives in Germany with Jana, who was a work placement student at Crosskennan and the pair developed a special bond.

Ellerie and Emily have found new homes, while Hadley is teaching young people to ride in a small, quiet riding school.

The volunteer added: “Since 2011 we have helped over 1000 equines, providing rescue, rehabilitation, rehoming, a permanent home, foster care, end of life care, and training.

“This year we have helped to date 93 equines, and have another seven equines in need of help. It's a steady stream of calls and emails requesting help.”

But with operating costs £10,000 higher than previous years because of the rising price of hay and hard feeds due to lack of grazing, an increase in electricity and oil use, the washing of rugs to keep ponies warm and bedding for the horses to sleep in, the charity has never needed more public support and funding.

Crosskennan is raising funds for winter through the sale of Christmas Ballot Tickets, Advent Appeals and a General Winter Appeal Fundraiser.

Ironically, after having been starved, the group of horses removed to the Redwings sanctuary in England group christened ‘the Breakfast Club’ - all named after morning food items.

Lynn Cutress, Redwings’ Chief Executive, gave an update to the Antrim Guardian about how the horses and ponies were getting on, a decade later.

“Looking at our ‘Breakfast Club’ ponies now, it’s hard to believe the once appalling conditions they were rescued from.” she said.

“Thanks to the efforts of our vets and care team, those who came to Redwings have grown up and thrived over the last 10 years – some still live at the Sanctuary, while others have found loving new homes through our rehoming scheme.

“The majority who are still cared for by the Sanctuary live at our Oxhill Visitor Centre in Warwickshire and are popular residents with our supporters.

“Not only do they love to greet our visitors - and enjoy plenty of fuss! - but one or two have even taken on very special roles.”

Marmite became the face of the Stamp Out Strangles campaign – an effort to raise awareness of the infectious disease strangles, which he was sadly suffering from when he was rescued, and how to prevent it.

He has made star appearances at some major equine events.

Mocha was rehomed in 2020 and now enjoys relaxing countryside hacks.

“As a charity 100% funded by donations, we’d like to say a huge thank you to our incredible supporters who have ensured we could give each member of the Breakfast Club the love and care they deserved.” Lynn added.

Unlike the horses in Mallusk and Coleraine, there was at least justice done for those rescued at Lisnevenagh.

Judge Desmond Marrinan said the men had treated the animals in ‘a pitiless manner’.

Neither man was fit to keep animals, said the judge, adding: “They should be thoroughly ashamed of their callous behaviour.”

“The scale of numbers involved and the suffering endured makes this one of the worst cases of its type.” he said.

Conor McAleenan was jailed for 14 months and his father Robert McAleenan for nine months. Each man served half their sentence on licence.

The judge also said the men would be disqualified from keeping any animal for 25 years.