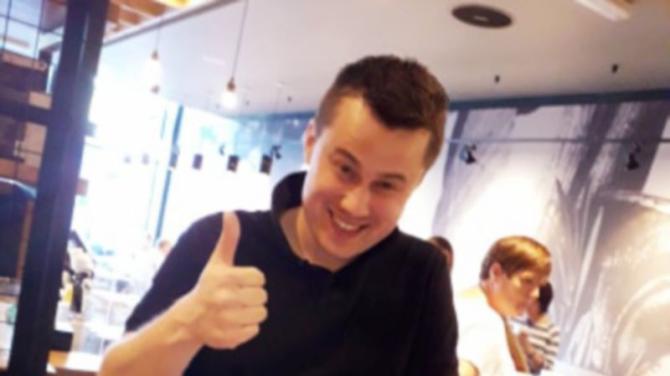 AN Antrim man has been speaking out about his mental health battles in the wake of contracting COVID-19.

Steve Caldwell, 37, will be well known to Antrim Guardian readers thanks to his fundraising charity work for good causes and his weight loss journey over the past few years.

But the man well known for his friendly patter and willingness to help others, has often hid his own troubles behind a big smile.

He opened up about his seven-year struggle with his mental well-being, which he said were made worse by having to go into isolation after getting the coronavirus.

Steve said that his symptoms and loneliness contributed to severe anxiety, nausea and even suicidal thoughts.

“I have battled with depression and anxiety from the age of 30.

“With the help of my doctor, medication, my faith, family and exercise I have been doing really well.” he said.

“The last couple of years have been completely incident free and things have been great. I tested positive for Covid in July and it’s different to other people’s experiences of Covid.

“The kicker for me was the impact on my mental health - it was just devastating and I am still recovering to this day.”

After nine days of isolation, Steve said that he was becoming crippled with anxiety.

“It felt like I had been covered with a blanket of darkness,” said Steve.

“It was devastating because I was doing so well. I had a lifestyle change and was as fit as I had ever been. That idea of ‘you’ll not get Covid if your super fit’ is just a myth.

“I felt worse than I have ever felt. I felt anxious constantly and needed 24/7 care from my mum, who I was living with. I felt like I was losing my mind.

“I had suicidal thoughts in August. My mum had gone out and I thought ‘now is the time’.

“Something inside me made me call my mum and get her home to me. She didn’t ask any questions she just came straight home to me.”

Steve was then enrolled with the Antrim Crisis Mental Health team and he is now seeing a therapist weekly instead of monthly.

“My own doctor has been great. I had to take off work for six weeks and lost one stone.” he said.

“Some days the TV was on, I had a blanket round me and I was just staring at a wall.”

Steve said that he hoped that by speaking out openly about his struggles, he may encourage others to seek help.

He is also full of praise for the family and friends who have supported him.

“I have a great group of family and friends who made it safe for me to admit that I was struggling,” he said.

“They didn't just say ‘it’s OK to not be OK’ - they helped when I said I wasn’t OK. I wouldn't be here without them.

“I am keen not to give a fairy tale ending, I am still recovering each day but I guess I just want to raise awareness.”

Back in 2019, Steve told how his determination and faith has helped him shed seven stone.

In June 2018, Steve Caldwell, who at that time in Starbucks at The Junction, took part in a charity climb up Slieve Donard - which started him on his weight loss journey.

“My walk back down from Slieve Donard was a crossroads in my life,” he told the Antrim Guardian.

“In the months prior to this day, I had signed up to do a charity climb up Slieve Donard.

“At over 20 stone, this was optimistic to say the least.

“I’d started the hike with several colleagues from work and had made it about a third of the way up before I began to feel out of breath and could not go on any further.

“Feigning a sore foot, I had to announce that I could not go on any further. I was too overweight to continue.

“To say the walk down past a sea of faces who knew me was a walk of shame, was an understatement.

“As I walked down from Slieve Donard that utterly crushed, devastated and ashamed, I decided that something had to change.

“In the months that lay ahead, the mountain that I couldn’t climb in Slieve Donard, became a powerful metaphor for the mountains I would endeavour to climb in my personal life.

“On top of being obese, I was also walking the dark corridors of mental illness, namely anxiety and depression.

“At the base of Slieve Donard that rainy day in June 2018, I decided it was time to start climbing both of these mountains.”

Steve said that the morning after, he began to pray.

“Being a Christian, I strongly believe God shows compassion on the cries of my heart.

“My favourite Bible verse comes from Psalm 121 which states, ‘I lift up my eyes to the hills, from where does my help come from? My help comes from the Lord, the maker of Heaven and earth’.

“That next morning I begged God for help.”

He then began to walk around Antrim town, only managing a few miles twice a week.

“I was embarrassed to be seen walking so slowly round Antrim.

“But I kept track of my mile time, the calories I burnt and kept at it.”

He also adjusted his diet, eating three times daily, and cutting out the junk, allowing himself a treat at the weekend.

As the months passed by, 20 stone turned to 19 and then to 18, and people began to notice.

Steve’s motivation grew and he started walking three miles, four times a week in all weathers.

He downloaded a fitness app, logged every mile and recorded what he ate.

“According to the World Health Organisation, exercise can be as effective for mental illness as medication.

“After each session of exercise, this dark forest became less scary, and maybe even less dark.

“I soon found myself going to exercise when the darkness descended.”

In early 2019, Steve joined the gym at Antrim Forum.

“In the summer of 2019 I began to attend the gym five times a week, this was necessary to continue to climb those mountains of weight loss and mental illness.” he said.

“I began to enjoy exercising.

“I wanted to share my story to encourage anyone who is considering a similar climb up either of these mountains.

“My story proves their ascent is possible.

“Perhaps I will always be climbing both of these.

“At least now I can say I am on the way up, rather than on my way down.”