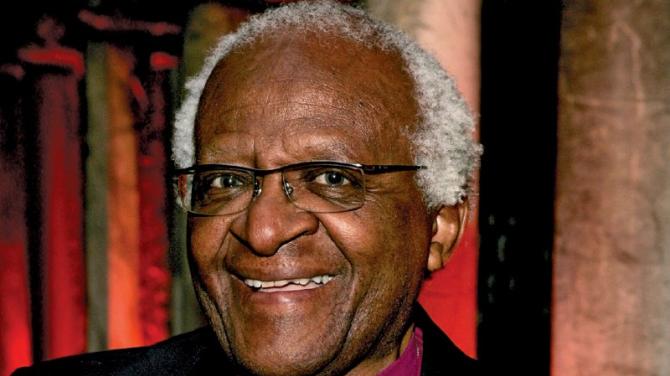 ARCHBISHOP Desmond Tutu died on Boxing Day after a long fight against cancer - but he left behind a world much changed by his towering contribution.

Considered by many to be South Africa’s ‘moral conscience’, he had devoted his 90-years to working passionately to tear down apartheid.

The straight-talking clergyman also used his pulpit as the first black Bishop of Johannesburg and later as the Anglican Archbishop of Capetown, to galvanise public opinion against inquity, both at home and around the world.

His friendly and engaging manner opened doors wherever he went - from the corridors of power, to the homes of ordinary folk scarred by violence.

And so it was in 2001 when he called in person at the home of Phillip Brett, who is now the DUP Group Leader on Antrim and Newtownabbey Council.

He had heard that they had been devastated by the latest round of tit-for-tat murders in Northern Ireland and he wanted to offer his condolences. He wanted to offer them some light in the darkness.

The family could never have guessed that a global figure of Desmond Tutu’s standing would come calling - but then it had been a week like no other.

And to think it had all started just a few days earlier with a very different call...

When the phone rang shortly after 11pm respected paramedic Michael Brett instinctively knew that it could not be good news.

The caller was a nurse who lived nearby. There had been a shooting. People were hurt. Seriously hurt.

Under the impression that someone had ‘got a gun from somewhere and done something stupid’ he reached for his coat.

“I’d better go round and see what’s happening,” he said.

Michael headed out towards the Hightown Road in Glengormley, near the entrance to the local GAA club to the scene of a commotion.

He steeled himself for what lay ahead, but he was no stranger to the horrors of the Troubles. He had been at Omagh and the Shankill after both were rocked by murderous bombs. He had seen first hand the heart-breaking aftermath of sectarian hate.

But that night was different. The date was July 29 2001 and life could never be quite the same again for the Brett family.

For the young man lying before him was his son Gavin, and he was mortally wounded. Nevertheless, years of training kicked in and he started administering first aid.

Unbeknownst to him, his wife Phyllis was racing to the scene too. It was getting late and their 18-year-old boy had not arrived home.

As she made her way to Hightown people she met offered their condolences. She knew then that her son was dead.

The next few days were a blur. A steady stream of well-wishers offered their condolences - including West End impresario Andrew Lloyd Webber, who was in Ireland at the time, and anti-Apartheid icon Archbishop Desmond Tutu.

Gavin was laid to rest at Carnmoney Cemetery with his granny and grandad. His parents ‘didn’t want him buried on his own’.

Watching the coffin lower into the ground 20-years-ago was Gavin’s nine-year-old brother Phillip.

How would the youngster come to terms with his devastating loss? The UDA had killed his brother, guessing that he was probably a Catholic because he was hanging out with his pals near the GAA club.

He could have galvanised his burning grief and righteous anger to turn towards violence himself, but his was to be a different path.

Instead he was impressed by the visitors to the house who had tried to ‘change things for the better’ - people like DUP man Paul Girvan and SDLP rep Noreen McClelland.

He went on to pursue a career in politics, rising quickly through the ranks of the Democratic Unionist Party. Indeed, he was Nigel Dodds’ right-hand man for several years.

It has been a remarkable journey, but he has seldom spoken publicly about his brother’s death. He did not want to be defined by a tragedy not of his making.

But two decades have now passed, and the local rep decided it was time to lift the lid on the enduring impact that the senseless murder has had on himself and his family.

And particularly on his dad, who died in 2007 of liver cancer, a broken man.

His standing as a paramedic was underlined when 20 ambulances and their crews converged on Carnmoney for the funeral - but he was never quite the same after Gavin.

“He was so well known throughout Northern Ireland because he was near six foot six inches tall, and he’d done 30 years in the ambulance service,” Councillor Brett recalled.

“He had been to nearly every tragedy that happened in Northern Ireland. I think dad’s difficulty was he’d probably saved the lives of so many people through the years.

“That would be the one he wanted to save the most, and he wasn’t able.”

Phyllis Brett revealed that he tried to find solace in the bottle.

“He never really recovered from it. It ultimately caused his death,” she said.

“My husband wasn’t a big drinker, but he drank a lot more afterwards.

“I think his biggest problem was the people he worked with – they didn’t really know how to deal with him.

“One of the bosses said ‘he changed to another person’.”

Despite his personal trauma, Councillor Brett has never shied away from working with the loyalist community.

“Trying to encourage those who were previously involved in violence on to a much more positive footing is something I 100 per cent support,” he said.

“Anything I can do to make sure no-one gets caught up in violence, or can avoid any other family going through what we went through, that’s something I’m very keen to do.

“Anyone that wants to work to move NI forward and get on a more positive footing, I’m very happy to work with them

“Just because someone has a past, doesn’t mean they can’t have a future.”

But does he draw the line at the proposed Amnesty for Troubles-related murders?

“We still think there’s some chance that, at some stage, someone will still be held responsible for this,” he said.

“I don’t think we’ll ever give up on it. To say victims should just step aside is not something we could ever support.

“We saw first hand the impact it had on dad and others. It doesn’t just destroy the lives of the people they killed, but those that are left behind.”

It is rumoured that the man who pulled the trigger has since died in a drugs overdose - but do they forgive the person who robbed them of a loving brother and son?

Phyllis said ‘probably, yeah’ – as long as they showed ‘sincerity on their part that they were sorry’.

“I don’t think carrying bitterness and guilt is good. It eats away at you.

“We’ve all made mistakes – okay, that’s a very big mistake.

“Maybe forgive isn’t the right word. I could reconcile myself with them.

“I’d be of a similar view to my mum. If we’d asked dad and he was still alive, I don’t think he’d say he’d have ever forgiven them.

“We saw the damage that did to him.

“Gavin would’ve wanted us to rise above pure hatred.

“We probably feel sorry for them, pity them.”