Tom's 3k a day for Foodbank 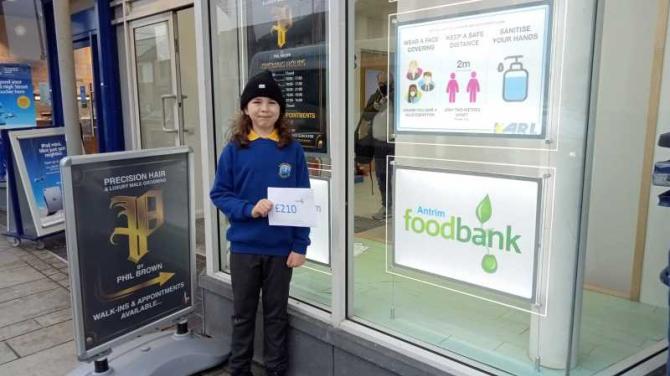 CHRISTMAS and the New Year is supposed to be a season for joy and celebration – but for millions of families, it is one of the toughest times as they struggle to put food on the table and heat their homes.

One local boy took it upon himself to make a difference.

Tom Crawley, a P7 at Round Tower Integrated Primary School in Springfarm, recently completed three kilometres on his CrossFit every day for a whole month to raise funds for Antrim Foodbank.

“I wanted to help the people in Antrim that wouldn’t have enough money at Christmas,” he explained.

He asked his family and friends to donate to his cause and managed to raise £210 for his efforts.

“It felt so good to be able to help the community of Antrim. Even my sister’s boyfriend donated a tenner!“

Jennifer Todd, Centre Manager at Oasis Antrim Community Support Hub, which operates Antrim Foodbank as one of its community support programmes, said the money would make a real differemce.

“For many people, the winter period can be extremely challenging with many families struggling to heat their homes and put food on the table,” she said.

“Last year, Antrim Foodbank provided 1,227 emergency food parcels to people in crisis, but we know it doesn’t have to be like this.”

The Trussell Trust, which supports a nationwide network of over 1,300 food banks including Antrim Foodbank, has seen year-on-year increases in numbers of emergency food parcels distributed to people who are living in crisis.

“What a remarkable young man Tom is!” she said.

”The money he raised will help Antrim Foodbank continue with our work to build a Hunger Free Future.

“His £210 will help us to provide emergency food and support to seven families in crisis in our Town for an entire week. Thanks, Tom.”