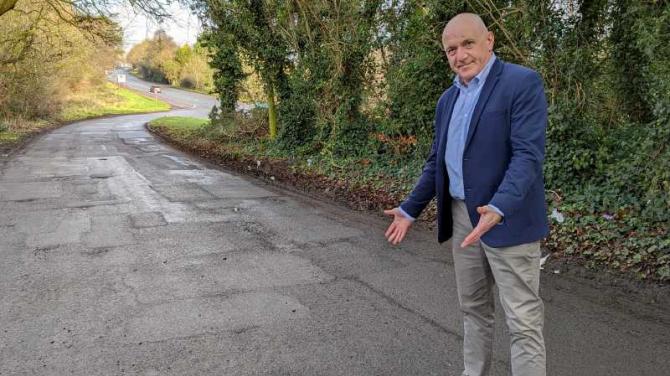 SOUTH Antrim MLA John Blair has continued his drive to get some much-needed improvements to the local roadwork.

And while there is some good news for some of the Borough’s worst stretches of road - it seems that others may have to wait.

“I am delighted that the Minister of Infrastructure has confirmed that Hillhead Road, Ballyclare; Largy Road, Crumlin and Gobrana Road, Glenavy will be resurfaced in the financial year 21/22”

He also received confirmation that Grange Road, Parkgate; Rashee Road and Ballycorr Road, Ballyclare will be included in the resurfacing plans for the following financial year.

So which areas have been left in limbo?

The South Antrim MLA said he was ‘disappointed’ that the Minister failed to give any reassurance on when the Dunadry Road, Antrim; Antrim Road, Dunadry; Ballylagan Road, Straid and the Kiln Road, Newtownabbey will be resurfaced.

“I am disappointed I have not been given reassurance that these roads, which are in a dire state, will not be resurfaced in the 21/22 or 22/23 financial years,” he said.

“But I will carry on lobbying DfI to make sure that the residents of this area have their voices heard and have an infrastructure network that is up to standard.

“I urge all constituents who are affected by these roads or any roads to get in touch so the necessary upgrades can be requested and progressed.”