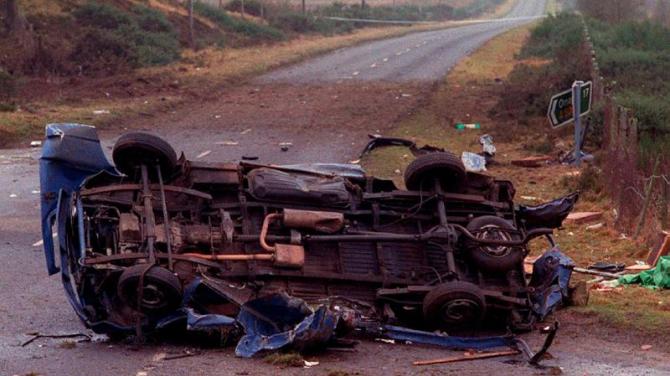 HAD he lived, Randalstown man Nigel McKee would be 52.

He would probably have a family of his own, maybe even grandchildren. The world was his oyster.

But we will never know how this story may have ended as the final chapter was written for him. A promising life full of endless possibilities was cut short 30-years-ago this week when Nigel became the youngest man to perish in the massacre at Teebane crossroads.

Workmen from Karl Construction in Antrim drove away from an army base in Omagh and into the grim history of the Troubles when the IRA detonated a huge roadside bomb on January 17, 1992.

Eight lives were eventually lost, though many more were touched by the tragedy - the hidden mental scars still painfully evident as another anniversary rolls around.

Seldom a day goes by when the family of South Antrim Assemblyman Trevor Clarke do not mention a man missing from their midst.

Nigel was his brother-in-law. He still finds it difficult to talk about that day. His wife Linda, who lost her beloved brother, finds it almost impossible.

Time may be a great healer, but some wounds are so deep that they never really close.

Last year the commemorations were cancelled because of COVID, but families have gathered this week to mark one of the darkest days of the Troubles.

For the Clarke family the memories of that dreadful day three decade ago remain ‘incredibly vivid’.

Down the years Trevor has been reluctant to relive the senseless slaughter - determined not to re-open wounds for his family circle.

But ultimately he felt that silence does a disservice to the innocent dead.

And once he relives that cold January evening, old memories he tried in vain to bury come back to the fore.

“It sounds like a cliche, but it really does feel like it was yesterday,” he told a previous edition of the Antrim Guardian.

“If I’m honest I don’t like thinking about what happened, let alone talking about it.

“The violence and killing were things that happened to other people, but that day our Troubles came home to roost.”

Mr Clarke married his wife Linda in 1990 and he was welcomed into the close knit family.

Her mother Jean had raised her children alone after her husband passed away when baby Nigel was just 18-months-old.

He grew to become the man of the house and though he was barely 22 he was prepared to put in a hard day’s work to put food on the table.

And so it was on January 17 when he set off for Lisanelly army base in Omagh. No-one could have guessed that they would never see him again.

“I remember we got a call at about 6pm telling us that something had happened,” said the local MLA.

“All we knew was that something had happened to Jim Henry’s men.

“We had no idea of how bad it was.

“Linda and her mum were panicking and I tried to keep them calm.

“You say things like ‘just wait and see’ but in your heart you know something terrible had happened because you’re getting no news.

“Eventually we heard there had been a bomb and that a lot of people were badly hurt, so I started frantically ringing around the hospitals, but he was not on any list.

“Then at 10.20pm we saw police officers coming up the drive.

“It really is a moment frozen in my mind.

“It could have been yesterday.

“They said that Nigel was among the dead and so started a nightmare for the family - one that continues right up to this day.

“You never forget something like that. You can never get over it.

“The best you can hope for is that you learn to live with the loss.

“Eight me who had been so full of life had been brutally murdered coming home from their work - and for what?”

The massacre also ignited Mr Clarke’s interest in politics, sparking a career which took him from Antrim Civic Centre to the heart of Northern Ireland Government at Stormont.

Now he sits in the same chamber with representatives of a political party which long espoused ‘the long struggle’ - and he conceded that was not an easy step to take.

“It has been a bitter pill for many of us, but it’s one you have to swallow.”

Other families have been speaking this week about living with loss.

Ruth Forrest, whose brother David Harkness died in the IRA, recalled that same agonising wait all too well.

The 24-year-old was a joiner who had recently returned from his new life in Australia to help the family care for their ill mother.

He had taken a job with Karl Construction in Antrim, which carried out work for the security forces, ‘to make ends meet until he would return to Australia’.

Ruth recalled that David had told her ‘he was considering not going into work on Friday, January 17’. He changed his mind - and that changed everything.

“Just after 5pm that evening, I could hear sirens in the distance and I opened the front door. I had a gut instinct immediately that something terrible was wrong,” she said.

“I then contacted my three other sisters, who also had the exact same gut instinct.

“At exactly 9pm my sister Heather phoned. Her exact words were, ‘Ruth, it’s all over, David is dead.’”

She said her brother had been ‘a quiet, inoffensive, beautiful soul who didn’t deserve to be taken in such a selfish and needless manner’.

“It has been an extremely difficult journey for so many people,” she added.

And since no-one has been convicted in connection with the blast, the pain has only been compounded by a festering sense of injustice.

Cecil James (Jimmy) Caldwell also died in the devastating blast. He was 37 and his wife Jean said her mind often returns to that day at the crossroads.

“You always get reminders. Whenever I go out walking I see older couples together, but I didn’t get that chance. Like many others, that was ripped away from us,” she told the NewsLetter.

“Husbands never got to see their children grow up. Grace, my youngest daughter was only three at the time, and I look at her children and think ‘they will never see their grandfather’, and that hurts.”

Mrs Caldwell said that, in many ways, coping with the grief ‘actually gets harder’ as the years roll around.

“I still have my days when I get cross, but I stop and think ‘don’t go down that road’... but I will never forgive [his killers] as long as I live.”