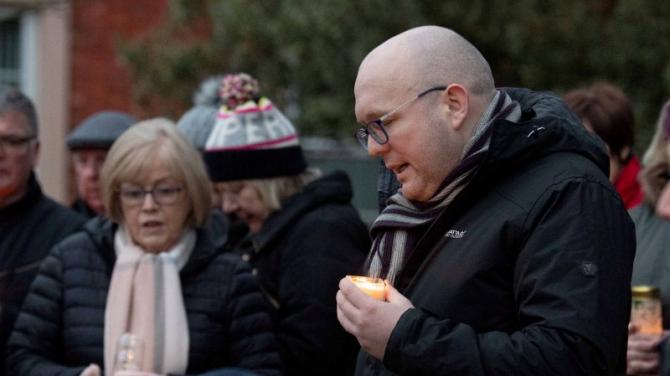 ST Comgall’s GAA Antrim has held a vigil in memory of the young woman murdered in County Offaly last week.

Teacher Aisling Murphy (23) had gone for a run along the canal bank in Tullamore when she was attacked and later died of her injuries.

In a statement, the club said: “We would like to offer our sincere condolences to the family of Ashling Murphy.

“Our thoughts and prayers are with them at this very sad time.

“As a club our hearts and thoughts are with those who knew her well, her family, her friends, her work colleagues and of course the children she taught in her school.

“As we return to training and see so many young people running out to play we must be thankful that they have that opportunity of enjoying life, friends and a future.

“And we want to pay our respects and remember Aisling whose own future was taken away from her for reasons we cannot understand.”

A vigil was held on the steps of St Comgall's Chapel on Sunday January 16, attended by Father James O’Reilly and local councillors.

Candles were lit and attendees also used the torches on their mobile phones.

The Antrim GAA team also stopped off at Tullamore on their way to play Offaly at the weekend to pay their respects at the floral tributes laid in Ashling’s memory.