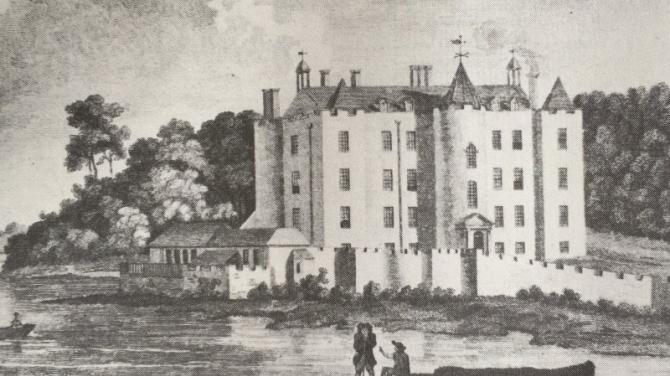 LAST week the Antrim Guardian took a deep dive into the British Newspaper Archives to give readers a look behind the scenes of Antrim Castle.

Now we go a mile or two up the road to another bastion of the borough, which also succumbed to a fiery demise - twice.

And the stories that emanate from those ancient stones are like something from Game of Thrones, some of which was filmed in the historic vaults.

It is thought that the present ruins of Shane’s Castle replaced an earlier stronghold built in the 16th century and originally called Edenduffcarrick - but more on that name later.

An account of the rebellion in Ulster states that in 1596, ‘on the edge of Lough Neagh standeth a runiated pile called Edendow Carreck, which, being made wardable, could be converted into a store for provisioning Blackwater and Coleraine in case of sea storms’.

This castle changed hands repeatedly, and, finally, in 1607, James I settled the castle and estate upon Shane McBrian O’Neill, whose family had held it at various times previously.

It is thought that the name ‘Shane’s Castle’ is probably derived from this man.

The oldest part of the ruins are thought to have been built at the time of the Plantation.

The castle gradually increased in size over the years, until approximately 1780 when it had become a very fine castellated structure.

It is known that a village previously existed on the edge of Lough Neagh and adjoining the castle, which was removed shortly before 1780.

John, the 1st Viscount O’Neill, lived at Shane’s Castle during this time up to his death in 1798.

Earl O’Neill succeeded his father in 1798, and about ten years later, entrusted his ideas for a further expansion of the castle, to the famous leading architect of his day Richard Nash, who had already designed Regent’s Street, Regent’s Park, Carlton House Terrace, and Buckingham Palace.

In 1816, only the terrace and conservatory had been completed, when the main block of the castle was destroyed by fire.

And this was no ordinary blaze - legend attributes the cause to the O’Neill’s banshee.

It is said that in olden times, one of O’Neill Lords went to help McQuillan in one of his raids.

On his journey, he saw a cow caught in a thorn tree.

As this tree was considered sacred by the fairies, no one would cut a branch to release the animal - apart from O’Neill.

On his return, he found that his daughter, Kathleen, had been carried off by the enraged ‘wee folk’ to the bottom of Lough Neagh, as punishment for cutting the tree.

They allowed her to return and tell him that she was safe, but they had made her promise that whenever misfortune visited the family she must appear and be heard to wail.

Another stipulation was that a room should be kept in the castle for her use at all times.

Her bedroom window was pointed out to visitors and her chamber maid said she could see her impression on her bed.

From then onwards when evil threatened a member of the family, her shriek was heard.

And heard she was, on the fateful evening of May 15 1816, when the large number of guests meant that her chamber was occupied.

While the fire was later been blamed on a jackdaw’s nest which caught light in the chimney, some blamed the banshee, and one of the guests who assembled on the lawn as the flames took hold swore that he saw a figure in armour clanking past a window.

The figure of the banshee was also said to have been spotted hovering above the flames of Shane’s Castle as it burned.

While her cry was never heard in the woods surrounding the estate again, one witness claimed: “I actually saw the White Lady of Shane’s Castle in 1966, while there with my school.

“I was ten-years-old. I went down to the vaults of the castle, which have now been closed up, I saw a Lady in white, crying, I asked her if she was okay, no answer, she knelt down on her knees, got up, put her hand up in the air, she could have not been very old, maybe in her twenties, I always assumed I could hear her, but it was so long ago? A friend called me I looked around, he had seen no one, when I looked back, nothing.

“She was in a long white dress, blond hair, I could see the tears falling from her cheeks I was that close. Nobody believed me, except my mother, why I do not know, however a couple of days later her father, my grandfather died.”

In a nod to his family history, the current Lord O’Neill owns a steam-powered tractor unit named The Banshee.

A frequent star attraction at the Steam Rally held annually at Shane’s Castle, the 150hp Scammell Highwayman is used to tow a Showman’s Caravan and Fairground Organ and provides electrical power to operate the organ.

One of the castle’s biggest fan was the famous actress Sarah Siddons, who was a good friend of Henrietta Boyle, wife of John, first Viscount O’Neill.

When Mrs Siddons was performing at Dublin’s Smock Alley Theatre in 1783, she spent time with her friends at Shane’s Castle and her memoirs provide a thrilling insight into what went on behind the scenes.

“I have not words to describe the beauty and splendour of this enchanting place; which, I am sorry to say, has since been levelled to the earth by a tremendous fire.” she said.

“Here were often assembled all the talent, and rank, and beauty of Ireland.

“Amongst the persons of the Leinster family whom I met here was poor Lord Edward Fitzgerald, the most amiable, honourable, though misguided youth, I ever knew.

“The luxury of this establishment almost inspired the recollections of an Arabian Night’s entertainment. Six or eight carriages, with a numerous throng of lords and ladies on horseback, began the day by making excursions around this terrestrial paradise, returning home just in time to dress for dinner.

“The table was served with a profusion and elegance to which I have never seen anything comparable. The sideboards were decorated with adequate magnificence, on which appeared several immense silver flagons, containing claret. A fine band of musicians played during the whole of the repast.

“They were stationed in the corridors which led to a fine conservatory, where we plucked our dessert from numerous trees of the most exquisite fruits.

“The foot of the conservatory was washed by the waves of a superb lake, from which the cool and pleasant wind came, to murmur in concert with the harmony from the corridor.”

It is thought that Mrs Siddons may have even ‘done a turn’ in a specially-constructed theatre, described by Reverend Daniel Beaufort, an Anglican clergyman and amateur architect, rector of Navan, County Meath, who wrote: “Drawing room adorned with magnificent mirrors, off breakfast room is rotunda coffee room, where in recesses are great quantities of china, a cistern with a cock and water, a boiler with another, all apparently for making breakfast; a letter box and round table with four sets of pen and ink let in for everybody to write.

“Conservatory joins house, fine apartment along lough, at end alcove for meals, from it a way to bathing apartments with painted windows. On other side of house, pretty and large theatre and magnificent ballroom, all of wood and canvas painted, and so sent ready made from London.”

Outside, on the terrace, which still exists, is a conservatory which is an exact copy of the one Nash built for himself at East Cowes Castle, Isle of Wight.

Today, it houses one of the finest collections of Camelias in the United Kingdom: they are over 100 -years-old.

Pieces from the Northern Whig described the sense of desolation in the aftermath of the fire.

“An extensive library and many valuable paintings were wholly consumed in this awful conflagration; the green-house or grand conservatory of rare and foreign plants being the only thing that escaped.

“From the ruins which remain, it is evident that it was fine spacious building: the vaults, which are still entire, and extend to the very verge of the lake, merit the particular notice of the curious traveller, both from their spaciousness and rather extraordinary construction. Several turrets and towers are still standing; and from their tops fine view of the interesting scenery, amid which the ruins lie, may be obtained. number of cannons are still mounted on the fort, which is boldly situated.

“Some of the buildings which formed a part of the out-offices, have been fitted the noble proprietor as temporary residence. We have heard, with pleasure, that it his Lordship’s intention to erect another castle, if not on the ruin of the old one, on some spot the immediate vicinity.”

Another piece reads: “The fire, which was quite accidental, commenced in the chimney, through which it burst with such violence into the drawing-room to render all resistance to its progress unavailing.

“No part of the property was saved except the title deeds and other valuable papers, with the family plate.

“Nothing could exceed the awful sublimity of the scene during the period of the conflagration.

“The horizon for miles around presented appearance similar to that witnessed a summer’s morning before the sun first bursts upon view, whilst the expansive water of Lough Neagh displayed a sheet of living flame, reflecting open the eye of beholder the steady bloom of the burning pile.

“The entire hills and rising grounds for miles around were covered with spectators, who beheld in profound and stupefied astonishment the terrific devastation of that princely castle, where for centuries resided some the most illustrious Kings of Ulster.”

A correspondent to the paper reveled that he possessed ‘printed card setting forth rules for the preservation of order in the castle’.

Among some of the tongue-in-cheek resolutions made on November 20, 1785, with Charles Leslie, Esq., in the chair; were “That there shall be breakfast made after five in the afternoon or evening tea after one in the morning.

“That no noise shall made in the day for fear of awakening the company.

“That there shall be one complete hour between every meal.

“That supper may not called for, for five minutes after the last glass of wine, to give time to lay the cloth.

“That general noise in the parlour only permitted to extend two miles off, or Antrim farthest; it may then proceed by post.”