Locally-built 'Boris Buses' may run out of road 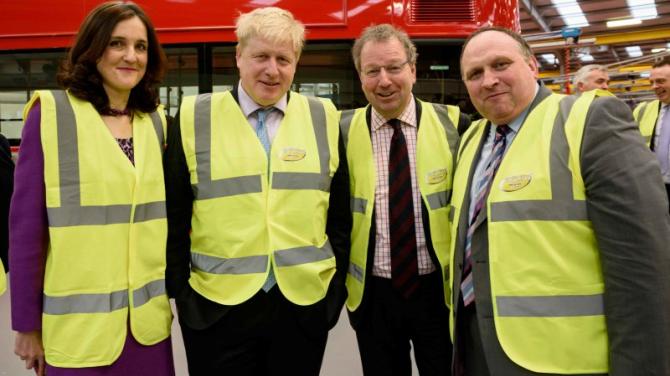 THE Antrim-built ‘Boris bus’ may soon disappear from London’s High Streets unless Transport for London's (TfL) financial difficulties can be resolved.

Wrightbus made 1,000 of the iconic new Routmasters after they were introduced by Boris Johnson in his second term as Mayor of London at a cost of about £350m.

But London's Evening Standard has reported that the bus fleet is approaching its ‘mid-life refurbishment’ which is required about seven years into an expected 14-year lifespan.

And the paper said that TfL is struggling to find the estimated £31m needed to carry out the upgrades.

When Mr Johnson was Mayor he announced a lucrative order to produce London's distinctive red double-decker, an updated version of the original Routemaster.

Mr Johnson visited the Wrightbus plant in Antrim, where the chassis for the buses were made, during the EU referendum campaign in February 2016.

There, he confirmed a fresh deal to buy almost 200 new Routemaster buses.

The deal was thought to be worth around £60m and will help secure the workforce of the bus maker.

During his visit he famously tested the strength of the chassis of the bus by doing pull-ups on it, as witnessed by the Antrim Guardian.

The firm moved into administration in early October 2019 after a fall in orders, among other issues, before being saved by new owner Jo Bamford.

TfL’s current government bailout has been extended until February 4 but its commissioner Andy Byford said the organisation was assuming a ‘Domesday scenario’ of moving to the ‘managed decline’ of the public transport network due to uncertainty over long-term capital investment.

TfL has begun advertising contracts to refurbish the buses, which unlike others are directly owned by TfL — meaning it has to meet the refurbishment costs.

This includes spending up to £5m on new driver's seats and £1m on pre and post-refurbishment inspections.

A total of about 20 changes are due to be made to return the buses to ‘as new’ condition.

These include new passenger seat covers, upgrades to the fire suppression system, a re-spray of the red exterior paint, a ‘deep clean’ of the interior and new customer signs.

Sadiq Khan refused to buy any more ‘Boris buses’ when he took over as London Mayor in 2016.

Mr Khan said bus manufacturers across the UK would suffer if TfL was unable to lead the move towards electric buses.