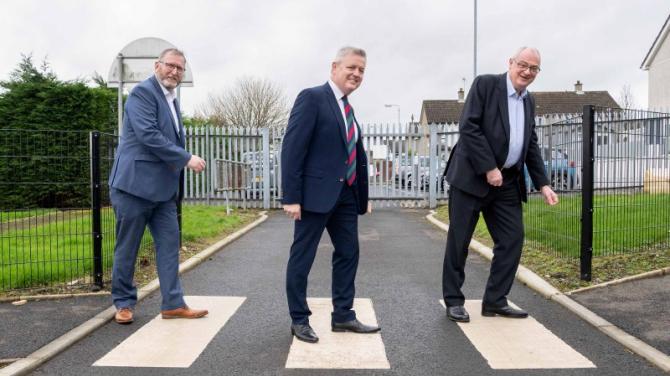 TEACHERS and schools in Antrim are facing a ‘battle’ with the increase in the population size, according to the Ulster Unionist party leader Doug Beattie.

A row about Doug Beattie’s past behaviour on Twitter was consigned to the past as, accompanied by South Antrim MLA Steve Aiken, Assembly hopeful Alderman Paul Michael and council colleagues Jim Montgomery and Norrie Ramsey, took in schools and workplaces.

The delegation called in to the Global Point business park and Mossley Mill council HQ in Newtownabbey and to Parkhall Primary School, Riverside School and Randox in Antrim.

The issue of school sizes in Antrim has come to the fore in recent weeks with news that Parkhall Integrated College is set to be extended to accommodate the current number of pupils - but no increase in enrolment has been approved.

With a plethora of primary school provision and the closure of Ardnaveigh, Antrim High and St Malachy’s, only two secondary schools remain - Parkhall and Antrim Grammar.

This means that scores of pupils leave the town on buses each morning to be educated elsewhere, many of them never returning to study or work.

Mr Beattie said that ‘education hubs’ are the way forward.

In Antrim, Parkhall Primary, the Integrated College, the Grammar school and a number of nursery school are all clustered closely off Steeple Road.

“I am concerned in regards in how we resource schools.

“If you group schools together, where the real estate is available, you can create an educational hub, which is better for pupils, teachers and communities.

“We have a prime example here (in Antrim).”

Mr Beattie said that there was scope in the borough for pupils to complete their education and go straight into work.

“Our schools are about creating young people with skill sets to enable them to move into the workplace.

“My concern is that there is a disconnect between education and the economy and employment.

“We know there is a linkage but we are not tying them together enough.

“Things are being done, but not enough, and there is a lot of work to do.”

Turn to Page 3 for more details about Doug Beattie’s visit to Antrim.