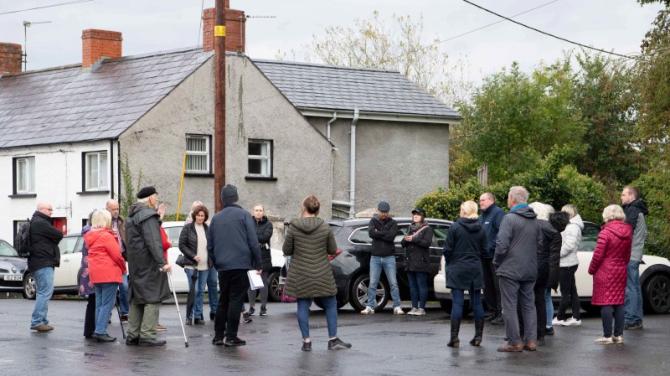 A DEVELOPER has re-advertised a smaller planning proposal for a derelict property in Antrim’s historic Riverside area after an outpouring of objection - but protestors claim their concerns have still not been addressed.

In late 2021, the Antrim Guardian revealed the plans for 20 homes on the currently derelict site of 51b Riverside, Antrim.

This newspaper reported on how parking is already at a premium on Riverside, with many people having to leave their cars hundreds of metres from their own properties and vehicles crowding access to and from homes on the narrow street, hampering deliveries and emergency services vehicles.

And there is no footpath for pedestrians.

Gribbin Homes is based at Moneynick Road in Randalstown and is understood to have purchased and developed other lands in the Riverside area in the past.

A campaign against the development has been started by residents, headed by local woman Joanne Elder.

She said that the residents aren’t averse to development at 51b Riverside, as it will reduce antisocial behaviour in the area, but they feel that the original planning application isn’t sympathetic to the local amenity and that the sheer number of dwellings is unsustainable for the site.

The new proposals have reduced the number of properties down to 14 - seven apartments and seven townhouses.

South Antrim MLA Trevor Clarke has rowed in behind the residents after attending a series of meetings to hear their concerns.

The MLA said that the council, in exercising its planning functions, has a duty to be guided by the objectives set out in the Antrim Town Centre Conservation Area document.

In a letter which he encouraged local people to submit to council in objection to the plans, it is noted that the proposed new development is ‘not in keeping with the history, character or scale of the Conservation Area of Riverside’, adding that the apartment block will be taller than existing homes.

And Mr Clarke said that the revised proposals still contain far too many properties.

“I have been contacted by residents of Riverside regarding the amended planning application for 14 houses however the principle objection still stands – Riverside cannot cope with any more traffic.” he said.

“Replacing one house with 14 would only serve to increase the intensity of vehicular movement on an already overwhelmed road.”

While Ms Elder has welcomed the reduction in the size of the development, she said that the amended plans still fall far short in addressing the concerns of local residents in Riverside and surrounding neighbouring areas.

“Gribben Homes have commissioned a number of highly qualified consultants within their particular fields, including a structural engineer’s report.

“They have recommended demolition of the existing buildings.

“If the planners were open-minded about this, they should commission an alternative report asking an engineer what needs to be done to stabile and re-use the buildings.”

It was noted that the original submission from the Department for Communities’ Historic Environments Division said that ‘consideration should be taken to retain and replace the existing vernacular house.

Ms Elder continued: “The HED request for an archaeological survey is now fulfilled and makes for some interesting reading on the history of Antrim.

“Within the report, it confirms the age of the building as pre-1830 and normally a building of that age should be retained when possible.

“Although it isn't listed, re-use of existing buildings is important from a climate change point of view.

“The planners should asking Gribben Homes to provide a plan showing retention of the old building and some compatible development around it.

“The latest plan recommends removing most of the significant trees. The wildlife survey shows an impressive list of plant species and with the need for re-wilding and retaining hedges and shrubbery, there is an argument for not filling the site with houses and car parking

“The report on drainage simply confirms that the land is unlikely to be flooded-should it not also discuss the impact of additional housing on the existing sewerage and storm water infrastructure?

“Presently there is no mention about the impact of additional traffic in Riverside and particularly the exit into the town. The planners have sent a second request to Roads Service for comments

“We would hope any outstanding documents will deal with the following issues.

“There are - additional traffic flow of domestic, delivery and various other commercial vehicles and the lack of pavement which covers less than 50% of the length of the road, leaving the large percentage as a shared surface with front doors opening directly onto the road and with particular attention to the narrow points.

“There is no traffic impact report. Parking is also important, as residents on many occasions have been unable to park in Riverside and have had to leave their vehicles elsewhere.”

Ms Elder concluded: “We implore our councillors and locally elected representatives to use their clout to talk to the planning authority and the various agencies for example Roads Service to understand why the massive amount of local opposition is largely being ignored.”

A protest was also held at the site back in November, attended by Jim Montgomery and Leah Smyth of the UUP and Neil Kelly from Alliance.

Joanne Elder, said: “This will inevitably detract from an already fragile historical area and will increase vehicular traffic to the narrow and partially pavemented street.

“The road is frequented by many pedestrians, being one of the most popular routes that link the Mill Race Trail walking route to the town, as well as being used by the elderly and infirm and school children.”

“This is clearly profit over common sense.” she said.

“On further investigation of the planning application, the developers clearly haven’t considered the effect the construction will have on the immediate wildlife and mature indigenous trees, nor the surface water drainage so close to a river liable to flooding.”

UUP rep Jim Montgomery has spoken out against the development plans.

“Yet again we see plans to replace one house with multiple dwellings packed into an area not appropriate for this type of development.” he said.

“This seems to be coming a trend and is not welcome when there is plenty of other areas around Antrim with enough space for multiple dwellings.

“This proposed development is in an area of the town totally inappropriate for development and the development would stick out like a sore thumb in the area.

“It is an area which will become prone to increased flooding because of greater numbers of housing.

“In an area where there is no footpaths, the increased amount of traffic and parking does not bode well for existing residents.

“As a conservation area, this development is unnecessary and inappropriate and needs to be opposed.

“Thankfully a significant number of residents opposed to the development met with Councillor Kelly, Councillor Leah Smyth and myself on Saturday and a campaign of opposition which we fully support is under way.”

His party colleague Ms Smyth added: “It was clear to see that the residents are very passionate about the area and raised very valid concerns regarding the implications that this development would have for the area, increased traffic and flooding being some of the issues raised.

And Neil Kelly concurred, saying: “The local residents raised many issues including increased traffic in the area as well as the number of dwellings which includes a three storey building, flooding and conservation.

“I look forward to working with councillors Montgomery and Smyth to support the residents throughout this process.”