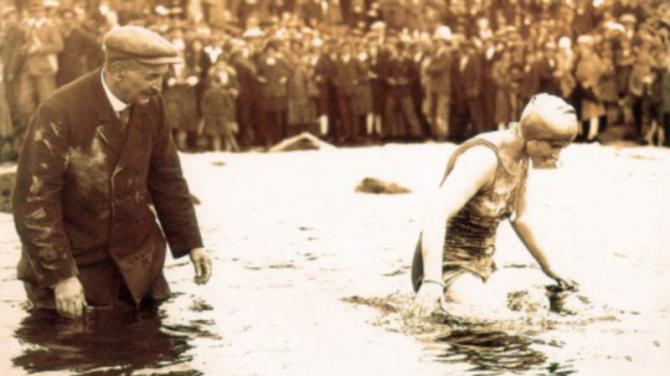 MORE than four decades after her death, a blue plaque has been unveiled at the birth place of an extraordinary athlete and true pioneer.

Mention the name Mercedes Gleitze to most people today and, chances are, you will be greeted by a blank stare - or a lecture on luxury German cars.

But back in the Roaring Twenties, Ms Gleitze was a bona fide celebrity - a trailblazer who carved her name in the history books.

In 1927 she became the first British woman to swim the English Channel, completing the epic swim in 15 hours and 15 minutes.

But time has not been kind to her memory.

Speaking outside her childhood home in Brighton this week, Labour MP for Kemptown and Peacehaven, Lloyd Russell-Moyle, said the plaque was a ‘long overdue acknowledgement of her amazing achievements’.

And you can expect to hear more about Mercedes in the coming months with the release of a film about her life. ‘The Vindication Swim’.

It tells the story of her struggle to overcome the physical challenges of long distance swimming - and the indifference of patriarchal 1920s England.

After defeating the Channel, she looked to challenges new - and her eye was drawn to Antrim.

Recent years have seen a resurgence in the number of hardy souls prepared to plunge into icy waters of Lough Neagh - including the formation, of course, of the intrepid Chilli Dippers.

Pale blue heroes one and all. But, alas and with all due respect, they are lightweights.

This week the Guardian salutes the true aquatic heroes - that special breed who decided that ‘well, I’m in now. I may as well swim right across’.

Lough Neagh is the largest fresh water lake (well, freshish) in the United Kingdom, covering 151 square miles. It is fairly shallow around the shore, but at its darkest depths it falls away by 80 feet or more.

In other words it was just the sort of challenge that appealed to Mercedes Gleitze, who also had the distinction of being the first woman to complete the eight mile swim of the Straits of Gibraltar.

And so it was in July 1929 that the glamorous Ms Gleitze and her entourage rolled into Antrim in her chauffeur driven car. A Mercedes, it seemed, planned to power over the UK’s most unpredictable waterway.

Among the locals there to greet her were WT Cooper, chairman of the Town Commissioners; RJ Kirk, WE Clarke and Joseph Barr, engineer of Lough Neagh Cruises, of which Mr Kirk was a director.

After exchanging pleasantries, Ms Gleitze and her entourage sailed down the Sixmile to the Lough where Mr Clarke had a motorboat waiting to take the party on a cruise.

During that sailing, the VIP visitor was presented with a detailed map of the waterway which she studied prior to the main event.

But she did not make life easy for herself.

Mr Barr suggested a course which was a challenging 13 miles, but Mercedes was determined to cross at the widest point - selecting a route which ultimately clocked in at a mammoth 22 miles.

Her fellow travellers were not so sure, diplomatically suggesting that the course was a ‘daring undertaking’.

But the indefatigable Ms Gleitze would not be deterred. She told the men that she was no stranger to swimming in treacherous conditions, reminding them that she had narrowly avoided being hit by a ship in thick fog!

Returning to her base at the Massereene Arms, she was cheered by a huge crowd who had waited for hours for the chance to welcome the star of many a Pathe news reel.

They would not have to wait long to see if she was up to the Herculean task she had set herself.

At 8.37am on July 12, her arms and legs liberally greased with lanoline, she entered the water at Arboe.

Fulfilling her sponsorship deal, she made quite a fashion statement by wearing her Rolex Oyster watch on a ribbon around her neck.

Accompanying her for the swim was a rowing boat and a motorboat, the latter containing a doctor, a solicitor and a journalist. A motley crew indeed!

At first all appeared well, and she even floated on her back at the half way point to enjoy a well earned glass of milk.

But after 10 hours the waters became dangerously choppy, and as she weakened the decision was taken to abandon the swim at the 18-mile mark.

Still an impressive achievement but the record, unlike Ms Gleitze who collapsed on her return to terra firma, still stood.

The record was finally smashed in 1961 when a Spanish lady called Monserrat Tresserras took the plunge.

The swim into the history books from Maghery Ferry to Antrim took 16 arduous hours, but she got there in the end.

But it was not only women who heard the call of the Lough.

Indeed, two years before Monserrat dived in, it was an adventurous Ulster man who negotiated the murky waters for the very first time.

That man was Jack McClelland and his date with destiny came on August 8, 1959.

More than 30-years-ago ago the Antrim Guardian finally caught up with the nautical pioneer and he happily recalled his experience.

And he candidly admitted at the outset that it was the record that nearly never was!

In July 1959 Commander Gerald Forsberg from Lancashire set off from Maghery on a mission to become the first to complete the treacherous swim across the Lough.

Sadly for him it was not to be. Approaching his final destination the Commander, who was later awarded the BEM for services to the RAF, clambered into a boat immediately sinking his challenge.

His difficulty, of course, was Jack’s opportunity - and, grabbing his trusty goggles, he seized it with both hands.

An accomplished long distance athlete in his own right, the local man had outswam competitors from 24 other countries to win the world famous English Channel Race a couple of years earlier.

Confidence boosted, he set his sights on the biggest challenge the UK had to offer.

Before dipping his toe, however, he did his homework.

“A well-known German swimmer had tried the Lough six times and failed so I was able to use a lot of her data in my efforts and I also spent time with her boatman to pick up some tips,” he said.

“I discovered that Lough Neagh can be very difficult if you get bad weather.

“There’s also no actual rhythm and because it’s not very buoyant it takes a lot of effort to stay up in the water. Swimming in the sea is much easier.”

He also discovered that the Lough is full of unexpected hazards - and one of these almost put paid to his record-breaking bid.

“I received an injury to my right leg halfway through my swim when I hit a submerged log or something,” he recalled with a wince.

“That caused a severe cramp in my calf muscle and even though my wife threw me out some first aid measures from the boat, my leg was more or less useless for the rest of the swim.”

The injury meant that it took Jack - who was 34 at the time - 16 hours to complete the 20-mile course, rather than the 12 he had planned for.

He had niggling pains for years, but that did not stop him staying on the crest of a wave.

He went to swim every bay in Ireland, including Belfast Lough.

He also swam across lakes in Switzerland - and claims to be the first Ulsterman to swim between Africa and Spain.

Jack’s famous Lough Neagh swim was sponsored by a vegetarian food company, and it was in health foods that he was to specialise for the rest of his working life.

Right up until the 1980s he owned a chain of shops, including one at Ballymoney Street in Ballymena.

When he spoke to the Guardian in September 1990 he was happily retired, dividing his time between County Antrim and his second home in Alicante in Spain.

And, yes, he proudly counted among his friends a certain Monserrat Tresserras.

The trail-blazers obviously had a lot in common and forged a deep bond - 80 foot deep, in fact.