Gimme shelter! But health centre users ask: 'why can't we just come inside?' 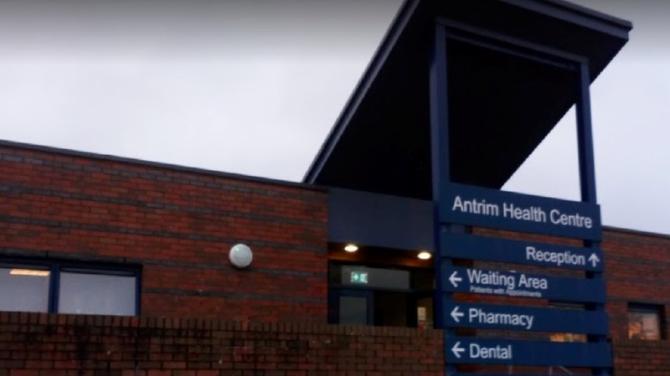 A LONG awaited shelter at Antrim Health Centre is set to be delivered at the end of the month.

South Antrim DUP MLA Pam Cameron has revealed that she had spoken with the Northern Trust last week who had ‘assured’ her they are on target with the shelter for the public waiting outside the Station Road facility.

Since the outbreak of the pandemic, the elderly, pregnant and vulnerable have been asked to wait outside the premises rather than inside the waiting room - even during scorching heat and freezing conditions.

A contractor to construct a shelter was a appointed late last year.

“The shelter is currently being manufactured by the supplier and the Trust anticipates supply, delivery and erection of same by the end of February or the first week in March 2022.” said Mrs Cameron.

She added: “I know Antrim councillors Paul Dunlop and Neil Kelly had also been actively pushing this matter over recent months also.”

However people are still asking questions as to why people cannot enter the premises, noting that there are no restrictions in health centres at Templpatrick or Randalstown.

One woman asked: “Could you help us understand why they won’t just open up the waiting room instead of going to the expense of building a shelter?

“Seems very pointless, everywhere else is opening - I can go to A&E and wait in their waiting room! If you’re not sick, going to the doctors you come away sick from waiting in the cold and rain.”

Another queried: “A shelter to wait outside - what’s the point in wasting money on that when they could just wise to hell up and let people wait in that big waiting room they have?

“Pathetic, all the covid rules are relaxing everywhere else so what makes the health centre so different?”

Others agreed that the shelter is a waste of money at a time when health budgets are constrained.

Mrs Cameron said that the matter had been raised with the Northern Trust and Health Minister Robin Swann.

She said that while her GP practice is located inside the building, she cannot dictate how it is run.

Her party colleague, councillor Paul Dunlop, said: “While this is welcome news, I still maintain that Antrim Health Centre should be letting patients into the waiting room.

“If they did give a reason to those that attend the centre, as to why they won’t let patients in, then people might be more sympathetic.

“This is purely a decision made by the three practices that operate from the building.”

And fellow South Antrim DUP MLA Trevor Clarke agreed it was ‘too little, too late’.

He has also written to the Health and Social Care Board and asked them to intervene, and has asked the Trust to move on building a new health centre for the town.

“It’s now been almost two years of this pandemic and the signs are that we are thankfully heading out the other side.” he said.

“However, it seems to me that it’s too little too late for the Northern Trust to be providing an outside shelter at Antrim Health Centre for patients to wait.

“The current guidelines are easing, where people can attend concerts, the cinema, sporting matches and even the waiting rooms inside the A&Es are open.

“So I just can’t fathom why one; that this shelter has taken nearly two years in the making and two; the need for it now when GP surgeries are working on an appointment basis only, so there shouldn’t be a queue outside.

“Furthermore, shelter or no shelter we shouldn’t be expecting some of our most vulnerable and elderly to be standing outside in the cold, under what will merely be a glorified bus shelter - they should be allowed to enter the building and wait in the waiting room.

“That’s if they can get an appointment because we hear about the difficulties patients are facing even getting their phonecalls answered, never mind an appointment.

“It has been suggested that this is the new ‘norm’ but it’s certainly not the new ‘norm’ that we should welcome and therefore given this has taken so long, I have written to the Health & Social Care Board to ask them what action it can or will take to intervene.

“In the meantime if the Trust used its energies to build a new purpose built and modern health centre that is long overdue in Antrim, they wouldn’t be now considering wasting money on make shift proposals.

“To that end, I have also written to the Trust to ascertain what progress has been made with their plans for a new fit for purpose health centre to suit an ever growing population in Antrim town.”

The Antrim Guardian has reported on the row since the beginning of the pandemic.

Even though there is a large central waiting room in the complex, the decision was taken early in 2020 to leave the 24,000 local people who depend upon it, out in the cold.

Many local residents said that even veterinary surgeries are letting clients wait inside.

One Antrim woman saw the queue for herself when she went to the centre to pick up a prescription for her father.

“I couldn’t believe what I was seeing,” fumed Paula.

“There was an elderly gentleman there with a stick and he looked very frail - and it was freezing cold. Why is this still happening?

“You can go to the hospital or the dentist and wait in the warm. You can go to a football match or a concert - but you have to stand in line outside Antrim Health Centre.

“That’s not happening at other centres like Templepatrick, so why is it being tolerated here?

“It’s alright for younger folk, but people in wheelchairs, mothers with prams and the elderly?

“It’s just not good enough. If we can’t look after the most vulnerable in this society something has gone seriously wrong.

“A lot of local people share my concerns and we are considering starting a petition to let the powers that be know that this situation must be urgently addressed.”

After complaints about patients having to receive flu jabs in a tent outside the premises last year, a flu vaccine and booster clinic was arranged in a unit of Castle Mall.

An ‘Open waiting rooms in Antrim Health Centre’ petition has now been launched on the Change.org platform and has been signed by hundreds of locals.

Authored by a user called ‘The People of Antrim’, the explainer reads: “At the start of the covid pandemic, many public places closed their doors.

“Many places have since opened their doors. But not GP surgeries.

“Antrim Health Centre still does not allow people in to their waiting areas. Newborn babies, elderly people and everyone else in between are made to stand outside, regardless of the weather.

“It doesn’t matter if it is freezing or pouring with rain, people are still made to stand outside without even a little bit of shelter.

“Antrim Health Centre have adequate waiting areas for patients to be able to come inside to wait while maintaining social distancing.

“Why has Antrim not done this yet? Surely the management can consult with other GP surgeries to see what they’ve done, how they are doing it and what works best.

“Therefore, this puts us at an advantage, where management can gain insight from others who have already been through the trial and error of re-opening waiting areas.

“People of Antrim are asking for those in authority to consider either opening waiting areas or to assemble a dry and warm place for people to wait.”

Ulster Unionist councillor and Assembly hopeful Paul Michael reiterated that the decision was that of the centre management and not the Trust.

He has also called for a meeting to try and address the situation, saying that the decision is ‘not reflective’ of what was happening in other areas of the borough.

And Alliance rep Neil Kelly is all too familiar with the problem - because he first flagged it up a year ago.

“I first raised this with the Trust and the Health Centre back on January 14 2021” he said.

“There have been many more communications since then.”

He explained that there are two main issues - the need for a shelter to protect people from the elements and the more fundamental question of getting locals back into the building.

“Progress has been made, but it has taken so long - and I can fully understand the frustration out there.” he said.

“I’ve been advocating for people for almost a year now, as have others. I know that most of the Antrim town councillors have been involved too. It would certainly be fair to say that the response to date has been disappointing.”

In January, the Antrim Guardian reported on how Apricot Health Ltd, which is already behind the new health centre in Ballyclare, has a vision for a multi-disciplinary, GP-led and designed facility in the footprint of a car park beside the existing Civic Centre in the Steeple parklands.

The petition can be found at /www.change.org/p/management-of-antrim-