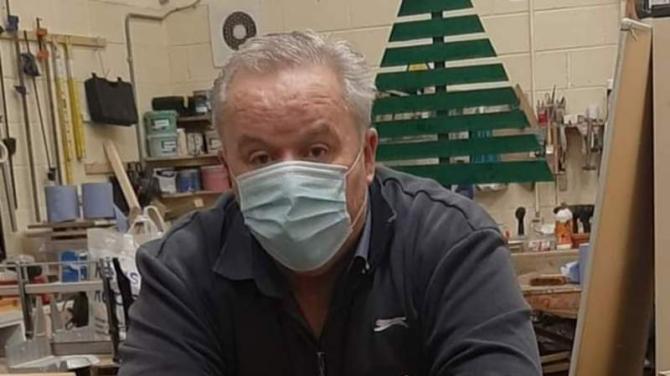 AN Antrim man says that the Men’s Shed in the town has renewed his self-worth and has helped him turn his life around.

Martin Magee, 57, fell into a deep despair after the breakdown of his marriage - but he has begun to rebuild his life with the help of Action Mental Health’s Men’s Shed.

Martin felt so low he could barely go to the shops for groceries, but once he plucked up the courage to go along to the Men’s Shed everything began to start looking up.

He was 53 when he accepted his sister’s advice to try the Men’s Shed, located at AMH New Horizons Antrim.

The Men’s Shed is a place designed for men over the age of 50, to share skills and a laugh, socialise and connect with their wider community while forging new friendships.

Father-of five-Martin says he suffered considerable depression after his marital upheaval, and it had such an adverse effect on him he became unable to function in the ‘high flyer’ career he had built for himself.

He had been a senior lecturer in carpentry and joinery at a further education college, an official exam moderator and CCEA inspector, but soon he found he was unable to contemplate getting up for work every day.

The pressure he felt by maintaining his usual daily routine continued to mount as he struggled along, and it wasn’t long before he felt no alternative but to take advantage of a voluntary exit scheme at work.

Martin lost his house, found himself jobless, alone and estranged from a number of members of his family and wider friendship circle.

His mental well-being deteriorated and even the mere thought of going out to the shops for groceries seemed insurmountable - he was in a very bad way.

“I suffered quite bad depression; the doctor said it was between moderate to severe depression. I had lost all my self-worth by this stage and felt useless and helpless,” he admitted.

But then his sister Mary suggested he attend the Men’s Shed, located at Action Mental Health New Horizons Antrim. Encouraged by her and supported by his partner Annette, he went ahead, but with hesitation.

Once there, Martin admitted he didn’t really engage much at the start of his journey with the other men.

“I didn’t really do much at the start but some of the men began to ask me how to do things because they knew of my background.

“I started to help them and then I began to receive great feedback from them. I even started to make items myself,” he said.

“It really began to give me back my sense of self-worth.

“I started to make things at the Men’s Shed and they were amazed at what I could produce, so I thought maybe I’m not as bad as I thought I was.

“I then took up scroll sawing, cutting out portraits, plaques and ornaments from wood, which I brought in to the Men’s Shed and I got such positive feedback that this was the route back to recovery for me.

“I kept going back to the Men’s Shed and kept helping the men; I made planters, garden furniture and other things and soon I found myself wanting to push myself, to test myself, to see what else I could do.”

The boost he gained from his time with the Men’s Shed gave him the impetus he needed to try to get back into employment.

“I knew myself that I couldn’t be someone who could be unemployed or live off benefits – I had to get back to work.” he said.

“I’m not completely back to normal. It’s like a crashed car – you can have it repaired it but it’s still been through a crash, and has some dents.

“It’s like that: I’ve been through a lot and though I’m feeling a lot better, I still bear some scars.”

In his personal life, Martin is trying to rebuild bridges with his family. Meanwhile, he also wants to express his heartfelt thanks to the Men’s Shed which provided him with that vital first footing toward reclaiming his previous vibrant life.

“I don’t know where I would be without the Men’s Shed. It really was a great help.

“I want to thank them for everything they did for me – the men and the project workers.

“They were all so supportive of me and I owe them a great debt of gratitude.”

The organisation grew from humble beginnings in Downpatrick in 1963 when it was known as the Industrial Therapy Organisation.

Back then it was tucked away out of sight, in tune with the stigmas of the day.

Today however, AMH has emerged as the standard bearer within Northern Ireland’s Third Sector – helping to smash the stigma of mental illness for all sections of the community.

A variety of resilience-building techniques are also pivotal to our range of services delivered to school children and young people in further and higher education.

Services provided also include a full range of therapeutic counselling for children, young people, adults, families including services for the deaf community.

The charity also offers a range of services for young and old alike, designed to promote mental well-being for those in work and currently unemployed; those affected by chronic pain or debilitating long-term illnesses; people living with eating disorders and also a dedicated service in Bangor for people with learning disabilities.

Shockingly, one in five adults in Northern Ireland will show signs of a mental illness.

When matched to 17 other countries, Northern Ireland had the second highest rates of mental ill-health.

Prevalence of mental illness in Northern Ireland is 25% higher than in England.

Almost 50% of long-term absences from work are due to mental health issues according to the Office for National Statistics.

But research has shown that investment in programmes, such as the New Horizons service, could help address as much as £50m of the cost of mental health problems in Northern Ireland annually

Engagement in the programme also contributed over £450,000 to the economy through employment and tax revenue.

AMH New Horizons supports the recovery of adults experiencing mental ill health, who are interested in progressing towards further education/training or employment.

New Horizons in Antrim offers a range of person-centred programmes in a friendly, relaxed atmosphere to support recovery.

There are a range of training programmes to help increase confidence and self esteem, gain new skills, qualifications and improve career opportunities.

The ‘Working it Out’ project is part funded through the Northern Ireland European Social Fund Programme 2014-2020, the Department for the Economy and the five NI Health and Social Care Trusts.

The Personal Development programmes may include emotional wellbeing, stress management, confidence and self esteem, motivation and assertiveness.

The AMH Employment Programme aims to prepare, place and support people to to increase their skills and access employment.

In addition, EVOLVE is a young person’s programme established in October 2015 and is delivered in partnership with AMH New Horizons Antrim and Youth Action.

The main aim of the programme is to bring together young people aged 18-25 to help enhance and develop their confidence, self-esteem and social interaction through fun activities and accredited training inlcuding OCN level 2 Teamwork Skills and OCN level 2 Employability.

Referrals can be made by a mental health key worker in the Northern Trust, an employment advisor from the Jobs and Benefits Office or contact the service directly for more information.

Men aged 50 and over are welcome and admission is free.