Three years on, 'Big Bobby' still casting a long shadow over the town he loved so well 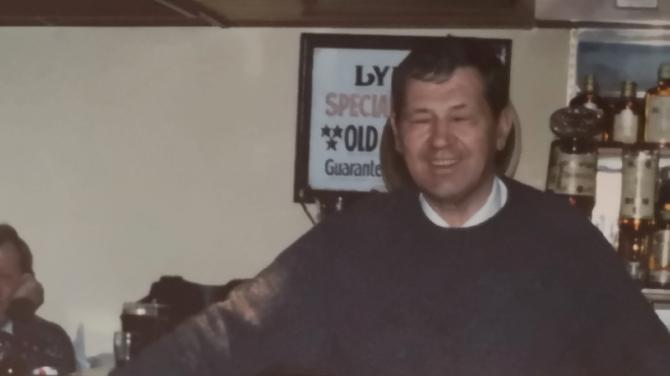 IT has been three years since the passing of Bobby Loughran, and some can scarcely still believe that they will never hear that booming voice or see that beaming smile again.

The former SDLP councillor, who also served as the first nationalist Mayor of Antrim in 2004-05, was born in 1931.

That same year, an Ancient Order of Hibernians hall was built just minutes away from where he lived, just off Barnish Road, which he was later to frequent on many occasions.

His mother was Mary Jane Kennedy and she and Bobby’s father worked at Shane’s Castle - not a bad playground for their six children, of which he was the second born.

There were four boys and two girls. From there the family moved to Edenduff and Bobby was sent to school under Master Dowds.

The family later moved to Whitehill.

Speaking to the Antrim Guardian back in 2018, he shared some of his fond childhood memories.

“Shane’s Castle was some place, everything was much more rural, there was no traffic on the roads.”

“I did everything that was asked of me, it was man’s work,” he said.

“In those days there was very little money. For entertainment, there was the Gaelic, and I made lots of friends and had some very enjoyable times.”

Urban life soon came calling and Bobby travelled to Belfast to train as a barman, also working part-time in some of the city’s pubs.

After four or five years, he went to Scotland, to Coatbridge near Glasgow, which had a strong Irish quarter.

It was in Scotland that he met Gladys, a bus conductor and the pair married on Hogmanay 1953 - a ‘big hooley’ was had, by all accounts.

All six of the Loughran children were born in Scotland.

But tragedy was to strike after the death of Bobby’s father.

“I came home for the funeral and I asked Doctor John Stewart, who passed away not so long ago, how long my mother would have left,” he said.

“He told me that she would probably only last another six months. He was one month out.

“Doctor John is a great loss.”

Bobby’s mother had made him promise to come home, and so eventually he kept his promise and he moved back to Northern Ireland.

At that time, Antrim had become synonymous with industry thanks to employers like Enkalon, where Bobby worked for 15 years, so there were no problems on the employment front.

Bobby lived in Neillsbrook for over two decades, but the advent of the Troubles caused community tensions, and a few broken windows.

He eventually settled not far from his childhood haunt of Whitehill.

A proud member of the Ancient Order of Hibernians for many decades, Bobby was well known in the borough for his dedication to the organisation and was seen every year marching on St Patrick’s Day, proudly wearing his shamrock.

It was the Randalstown jeweller, James McKeown, father of Bishop Donal McKeown, who encouraged Bobby to enter politics.

Over three decades, Bobby observed major changes, including the move from Steeple House to the Civic Centre and the ‘super council’ merger which saw Antrim and Newtownabbey finally become one borough council area in 2015.

During fiery debates in the old building, it was not unknown to hear Bobby’s stick banging on the floor, as he exhorted: “What about Randalstown?!”

“When (former Chief Executive) Sam Magee retired, he asked me to say a few words, and I said I was pleased that he was retiring.

“If he had gone to another council, he would have taken all his best staff with him, like a football manager!

“He was a gentleman. I also had a lot of time for (Sam’s successor) David McCammick.

“We did have some quite heated debates. But Andy Thompson always sorted it out and brought some calm back into it.

“We had two doctors on the council too. Dr McConnell and Dr Stinson. They were good men. Ron Woods, who was Sam Magee’s right-hand man, I have fond memories of him as well.”

Bobby’s many years of public service have not gone unnoticed.

“I went to Buckingham Palace. It wouldn’t normally have been my cup of tea, but my daughter really wanted to go.

“I met Mo Mowlam as well. She was a lovely lady. I wish she was still around now, she would sort all these ones out!

“I did 32 years in the council and I am proud of what was achieved.”

While he retired from council in 2013, Bobby was also proud of what he achieved locally in terms of road safety improvements, literally right on his doorstep, using his long-established connections to help get street-lighting, a footpath and traffic calming measures along the busy Barnish Road.

When he passed away in January 2019, there was an outpouring of grief and warm tributes.

SDLP leader Colum Eastwood extended his condolences to the family, along with MLA Patsy McGlone and Councillor Thomas Burns.

Former leaders Alasdair McDonnell and Mark Durkan were present for his funeral mass, along with several councillors and MLAs - both past and present.

Alliance leader David Ford, who had served with Mr Loughran for several years, was present too - along with Councillor Neil Kelly.

Henry Cushinan represented Sinn Fein, while former councillor Sam Dunlop, who has also since passed away, was there for the DUP.

Others who had worked with the 88-year-old down the years joined the large crowd, including those aforementioned former council chiefs, David McCammick and Sam Magee.

Though they came from many different backgrounds, they were unified by their mutual respect for Bobby Loughran.

Gerry Lynch from The Corner House bar in Randalstown, where Bobby was a firm fixture, also had fond memories.

“No one was ever a bit afraid when Bobby was around. He would come out on to the street at night and say ‘there’s not even a dog on the street!’

“He was a great character. When the new houses at The Meadows were built, a lot of young families moved in and they would come over in the evenings.

“At the end of the night he would start rounding people up and shouting ‘last bus to The Meadows, hurry, hurry, you’ll miss the bus!’

“It was only up the road, it was hilarious.

“People used to come into the bar looking for him and he would take them into ‘Bobby’s office’.

“I think he did most of his civic work in the back lounge.

“He got so much done for people. If they needed help with any sort of issue, houses acquired or sites passed - he would have helped anyone.”