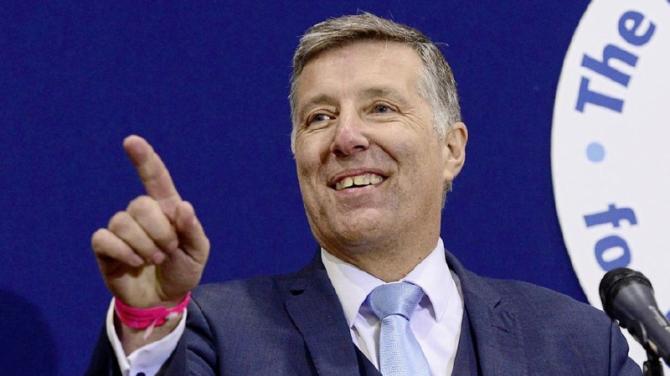 FINGER pointing has continued among local politicians following the resignation of Paul Givan as First Minister - with the Alliance party alleging that the DUP are now ‘addicted to disruption’.

Meanwhile, the DUP MP for South Antrim has blamed Sinn Fein for the chaos - while the chairman of that party warned that ‘we are in the end game’ while attending an IRA commemoration.

“This is disruptive politics and coming after the Edwin Poots announcement on ports, gives the impression that the DUP are addicted to disruption.” he blasted.

“It is difficult not to come to this conclusion given that the Assembly can make no changes whatsoever to the Protocol which the DUP claims to be a problem.

“The people of Northern Ireland during the last political standoff made clear that they do not want this. People want politicians who can work together and focus on delivering and that is exactly what I am trying to do for the people of South Antrim and Northern Ireland as a whole.

“This stunt has put important legislation at risk, legislation such as the Climate Change Bill, a Stalking Bill, an Integrated Education Bill and other important business of government

“It’s as if the DUP have now sought to share their internal chaos with everyone else. I am certain, however, that our constituents would prefer us to be focused on health, education and the economy.”

However South Antrim MP Paul Girvan has laid the blame for the disruption firmly at the feet of Sinn Fein.

“The Irish Sea Border is undermining Northern Ireland’s place within the United Kingdom, it is costing our economy £2.5m each and every day and it is threatening our access to lifesaving medicines.

“The DUP has been patient and reasonable, affording more than enough time for the EU and the UK to find solutions to bring this instability to an end.

“They have failed to act. We have been clear, if others fail to act, then we would, to remove the Irish Sea Border.

“We want stability, we want devolution to work and we want a Government that can deliver for all our people.”

“The Irish Sea Border means none of these are possible. The status quo is unacceptable and unsustainable.

Mr Girvan added that the people of South Antrim ‘have had enough of Sinn Fein’s continued acts of disrespect’.

“The political institutions in Northern Ireland were re-established on the basis that they would deliver better outcomes for all of our people.” he said.

“Instead of building respect, Sinn Fein have used and abused public office to wage a premeditated and calculated campaign of intolerance against their unionist neighbours.

“Be it the planting of a rosebush, the dedication of a tree, attendance at a cross community church service or the illumination of a building, all these simple, yet important acts, were scuppered and snubbed by Sinn Fein.

“It is clear that the current leadership of Sinn Fein has no interest in mutual respect or tolerance. This pattern of behaviour cannot continue unchecked or go unchallenged.

“The people of South Antrim have had enough of Sinn Fein’s continued acts of disrespect.

“Their message is clear, enough is enough. Time must now be called on Sinn Fein’s disrespect.”

Wading into the row, Sinn Féin National Chairperson Declan Kearney MLA, speaking at a 50th Anniversary commemoration for IRA members, said ‘the days of a unionist veto over change are gone’.

Mr Kearney was attending a memorial event for Phelim Grant and Charles McCann at Cargin cemetery outside Toome.

The pair were killed in a premature explosion in 1972 at Ballyginniff on the shores of Lough Neagh.

They had been intending to sink and destroy two sand barges, as sand from the Lough was used by the British Army for sandbags around military installations, but the bomb went off while it was being primed.

“We are now faced with a new crisis created by the DUP within our political process. It is a crisis about power sharing and whether unionism is prepared to accept that political power should be shared in this state.” said Mr Kearney.

“At its core is the old mantra that ‘no nationalist need apply’ - that no nationalist should apply for the position of First Minister.

“The challenge which political unionism has created for itself now is whether it will accept the direction of change in this society. That is the political crux of the next Assembly election.”

Turning to the stance of unionist political leaders, the South Antrim MLA said:

“Political unionist leaders need to understand they cannot stop the change which is now happening in plain sight.

“We are in the end game. Constitutional change is fixed on the political horizon. Unprecedented change is happening. My message to those from the Protestant and unionist traditions is that we want you to join us in managing that change.

“Political unionism has never served the interests of ordinary Protestant and unionist people. And the Tories do not care about anyone who lives here. It is now time for change - big change, constitutional change.

“The shadow of partition is being eclipsed by a new future. That is, a new Ireland which will be modern, inclusive and welcoming: A new Ireland, where we will have citizens’ rights, and where there will be social progress: A new national democracy which will be built on foundations of anti-sectarianism and self-determination.”