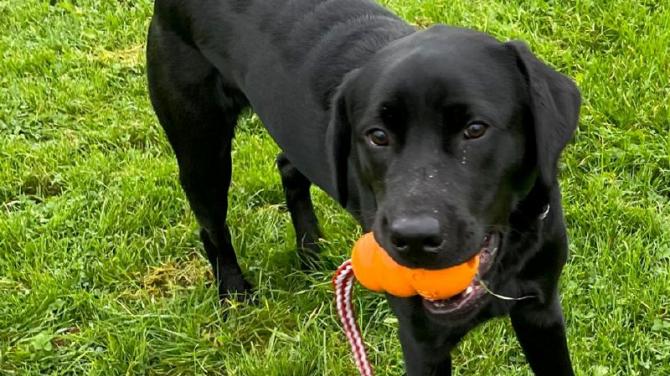 GEORGIE the Labrador might look like any other pet dog, gambolling about in his family’s garden, playing with a ball.

But once his harness clicks on, he’s at work - guiding owner Korinne Simpson safely past dangerous obstacles and giving her a sense of security and confidence as she takes her daughter to and from school or pops to the shops.

Korinne, who lives in Antrim town, started experiencing visual impairment - a complication of diabetes - back in 2003 when she was pregnant with her son.

She has had one service dog before and in January, after spending time on a waiting list, met Georgie, who was trained and provided by Seeing Dogs Alliance, a small charity headquartered in England.

To see Georgie, who is only 18 months old, interacting with Korinne, you’d hardly believe they only met a matter of weeks ago.

That’s partly down to genetics, and partly due to the expert training of people like instructor Sue Scott, who collected Georgie from ‘puppy rearers’ at a year old.

There, he learned to ‘be a well behaved dog’, walking on a leash and stopping at kerbs.

He also got used to living in a busy family home, walking on different floor surfaces and experienced riding on buses and trains.

With Sue, Georgie lived in her home for around six months.

Sue was able to assess his behaviours around people, other dogs and social situations, in a bid to best match him with a new owner.

She also worked him in harness to look at his walking speed, how he engaged with her and whether he used his initiative, if he was able to make decisions or what things might potentially distract him.

Sue travelled to Northern Ireland in mid January and spent three weeks making sure that Georgie and Korinne were a perfect match.

She initially walked Georgie around Korinne’s regular routes through the town before passing over the leash, and used a headset to help guide the pair while observing from a distance.

All Georgie’s foundation training was rewarded with food and, while he familiarises himself with Antrim, Korinne will use a portion of his daily kibble from a ‘treat bag’ for behaviour like stopping at kerbs and traffic lights.

This will eventually be phased out as he learns his way around and he will be happy with verbal praise.

Originally founded in 1979 to provide mobility training and guide dogs, The Seeing Dogs Alliance was relaunched in 2002 with the sole aim of providing an alternative source of dogs to guide blind people.

Larger charities like Guide Dogs have their own breeding programme and the process is fully funded, but as a small operation, Seeing Dogs Alliance sources puppies from other organisations, including Dogs for Good.

Assistance dog trainers often acquaint themselves with the best pedigree lines for the job and there is a lot of co-operation and recommendations between various agencies.

Korinne said: “My walk to Antrim Primary School is a bit of a rush and back home again is a bit of a meander, as my daughter likes to tell me everything that has happened that day!

“It was really important to me that I had a dog who was family friendly, good with kids and could switch off and be a pet when he was not working.

“I also need a dog that can keep pace with us, not always rushing around.

“I attend hospital appointments in Belfast so a dog needs to be able to cope with all the noise and bustle of the big city, travel on the train and cope with the slippy floors, stairs and unfamiliar smells in hospital.

“So nothing too hyper or easily distracted.”

Korinne’s limited vision means that thinks like bollards, bins, lamp posts, low walls and even small children can be hazardous.

Between her last dog retiring and getting Georgie, Korinne used a white cane and relied on her children warning her of obstacles in her path. But with Georgie, she can relax.

“He has given me independence and I feel comfort having him by my side,” said Korinne.

“Instead of relying on other people warning me or trying to help - which I can find quite frustrating, even if they mean well - I can do the school run, get my hair done, go to Antrim Forum and anything else I want to do.

“Sue has trained him so well and I love that he engages with me and then switches off and lies down when I need him to.

“But from the moment I took the harness, he went straight to my left side and was ready to work with me, it was amazing.”

Korinne said that the most difficult part of her journey are the zebra crossings at the bottom of Station Road and passing over Castle Way, when not observed correctly by drivers.

She has also asked people to be considerate when dropping off and collecting children from school by car.

“People are being knocked down often, it can be quite scary, some people don’t concentrate or drive straight through even when there are people waiting to cross or are still on their way over.” she said.

“Having Georgie makes me feel safer.

“At school, when people park on the double yellow lines, or on the pavement, it can present hazards not only for a person like me, but for children as well.”

Korinne has also reminded local people that while Georgie looks like a cute, cuddly dog, when he is working, he needs to be focused on his job.

“He gets off the lead, he plays, when he is out of harness, he is a normal dog,” she said.

“But like someone who works in a supermarket or a policeman or a firefighter, when he is in ‘uniform’, he has an important job to do.

“I need him to be engaged and paying attention to me, so when people are calling him and fussing him and trying to feed him, it isn’t helpful.

“I really appreciate it when people ask first ‘may I say hello to your dog?’.

“He needs to be good around people, but to distract him could equal danger to me.

“The other day a lady asked if she could give him a treat, it wasn’t appropriate for him because of what we were doing at the time, but I thanked her for asking first, because that is really considerate.”

She added that it was important for other people to keep their dogs under control.

Dog attacks on the UK mainland have resulted in service dogs having to be retired early because their were either injured or the experience left them too traumatised to work.

“It is really important for people that cannot recall their dogs, to keep them on a leash as it can really put a service dog off if another dog is aggressive or attacks them.” said Korinne.

“Even an overly friendly dog being in their face can make them more distracted.

“So again, while I do not mind if he has nice interactions with friendly dogs, it has to be when I tell him it is OK, so it is really important to ask first and if your own dog is boisterous or not good with others, please keep it on a lead.”

Georgie has slotted so seamlessly into the Simpson family that he has already been ‘Facetiming’ Korinne’s parents’ Labrador Cooper in the USA!

She has also joked that she has to shut him out of the room when she does yoga.

“He just tries to jump on top of me, copies me doing the ‘downward dog’, I just end up laughing and not doing any yoga!” she explained.

Korinne originally hails from just outside Philadelphia and was living in Miami when she met her husband, an Antrim native, 20 years ago and moved here to be with him.

While Sue was in Northern Ireland, she undertook a number of aftercare visits for other Seeing Dog clients.

Another recipient of a Seeing Dog, Pam Megahey, lives in Templepatrick with her German Shepherd Evie, and is a now a trustee of the charity.

There is another service user in Bangor.

Sue currently has another dog in her care preparing for service and has been using her visit to train young Midas, a Labrador/Golden Retriever mix, around the streets of the town.

She explained: “It’s really important that our dogs are calm, engaged, friendly and adaptable.

“With Midas, I am teaching him to relax in a crate alone and I sometimes leave him with friends for the weekend, so that he gets used to being with lots of different people and doesn't become too reliant with me.

“The training is ethical, the dog has to want to do it, it doesn’t have to be made to do it.

“Genetics are very important and we go to known lines that are biddable and easy to train.

“I’ll sometimes make short videos of my training with Midas, things like picking up objects and giving them back to me and sharing things, so that people can see how we are getting along.

“We put a lot of thought into allocating the dogs to clients and we will do a six to eight week check, then a six month check, then it moves annually - like an MOT every 12 months!”

It costs around £20,000 to purchase a puppy and care for it through the first two years of its life with puppy rearing, training, food and veterinary care.

Once handed over, the client bears the financial responsibility.

The charity relies on the generosity of the public, fund raising and legacies to survive and gladly welcomes donations and help with fund raising.

Seeing Dogs Alliance is run entirely by volunteers with the sole exception of the two freelance mobility instructors, including Sue.

Korinne said: “I always pop a few coins in the collection boxes.

“I will never be able to repay what Seeing Dogs Alliance has done for me and my family, they do amazing work with very little financial support. They have enriched our lives.”

She added: “I also want to thank the puppy rearers - they have all the jobs that go with raising a young dog, and then they have to give them away at a year old, it must be really hard for them, and the trainers too, having a dog live with them and then pass it on to someone else, it must be hard not to get really attached, but they aren’t doing it for themselves, they are doing it to help other people, people like me and my family, it is an amazing job that they do.

“I feel like Georgie is my sidekick already, we are like Batman and Robin! He has given me my confidence back and you cannot put a price on that.”

To find out more or to make a donation, log on to The Seeing Dog Alliance website: www.seeingdogs.org.uk

Alternatively, you can send a Cheque, Charity Voucher or Postal Order to:

You can also make a regular donation by Bankers’ Order, a similar facility to a Standing Order, by printing a form off the website.