Muckamore Centre expansion will give children room to grow 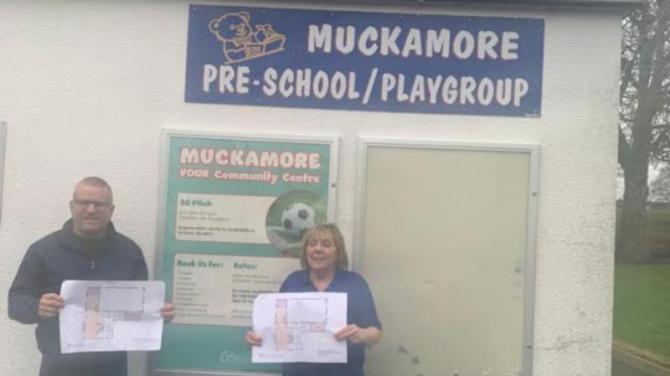 MUCKAMORE Pre-School and Playgroup is looking forward to the future as plans for expansion edge ever closer.

Last year the Antrim Guardian revealed that Antrim and Newtownabbey Borough Council was poised to spend over £50,000 to help give the children at at the facilty more space.

The service has existed since 1978 and for over 40 years has hired the social area including the annex room.

The playgroup has an enrolment of 26 children in the morning and 24 in the afternoon.

Prior to the Coronavirus pandemic, the playgroup reported that an inspection by Social Services in February 2020 advised them of a need to increase the floor space requirements to accommodate the current number of children.

Council officers agreed at the Community Planning Committee on October 12 2020 to report back to the committee with options and costs for maximising any additional floor space.

A feasibility study was been completed and four options have been shortlisted.

At the Community Planning Committee meeting in April, it was recommended that members approved the fourth option.

A report said that the additional space will allow the playgroup to store their materials and equipment currently stored in a former shower room adjacent to female toilet at the other end of the building.

The playgroup have a dedicated store off their room, but this is currently full.

The proposal will enlarge the equipment store in the main hall to accommodate and give easier access to groups who previously stored equipment under the stage, like bowling mats.

Part of the stage space will be replaced with a new workshop space for children.

This could also be potentially rented for other user groups when the playgroup are not using the space, including during the summer months and evenings.

The option will also include two additional children’s toilets in the playgroup space.

This would satisfy child protection measures by avoiding staff having to leave the playgroup space to accompany children to the public toilets.

The costed options within the feasibility report are indicative only, and the report said that an additional client contingency of 20% should be allowed to cover for unforeseen costs in this old building.

The costs do not include professional fees.

The report said: “With the ongoing Covid19 pandemic, the Community Facilities Coordinator has advised the Northern Trust that if the work is approved, it may not be feasible for the work to be completed in time for the children returning for the September 2021 term.

“As such, Northern Trust would consider an extension request for the work to be completed by September 2022.”

Back in 2020, it was warned that if floor space was not increased, the playgroup would have to reduce child numbers for September 2021 to 22 which, would also result in the playgroup having to make a member of their staff redundant.

However the plans are now approaching fruition, with the backing of local DUP councillor Paul Dunlop.

Heather McIntyre, Pre-School Manager, said that she was looking forward to seeing the work begin.

“I’ve been here since 1995 and the service has just gone from strength to strength,” she said.

“The plans look great and this is a really exciting time for the group.

“We are hoping that the work will start at the end of May and in time it may even mean that as well as having more room for our exisiting children, one day we will be able to accept more numbers.

“It is great to finally see progress on this issue and we are delighted that the council has been sp supportive.

“We are in a brilliant position, right beside the play park, and we are looking forward to the future.”

Paul Dunlop said: “I was contacted early last year by the pre -school with an issue regarding social services criteria on the number of children attending and space .

“The only option to retain numbers was to extend the building, so I lobbied council and was delighted when it passed through full council, therefore securing the future of the pre-school, which has long been a part of the local community.”