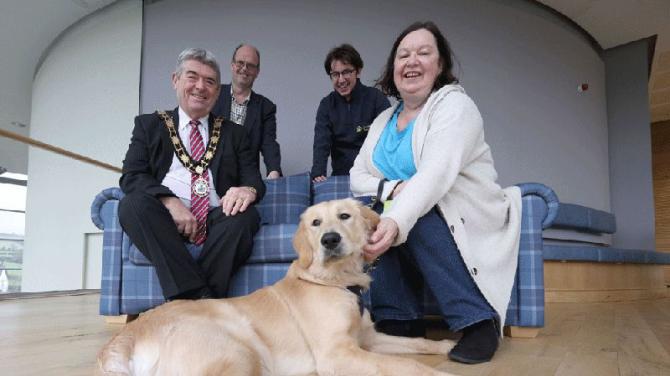 Carly was able to name the pup after former Mayor, Councillor Jim Montgomery raised £12,500 for Guidedogs NI as one of his Mayor’s charities during his term in office 2020 – 2021.

Guide Dogs NI allow the public to name one of their special dogs if they raise £2,500 or more for the charity.

Following a staff competition for name suggestions for the puppy, Carly chose ‘Parker’ after Sixmilewater Park in Ballyclare. This is Carly and her miniature poodle Teddy’s favourite place!

Mayor of Antrim and Newtownabbey, Councillor Billy Webb said Parker will prove to be a life-changing pal.

“It is a privilege that under the office of Mayor, we can select two charities to support during our term,” he said.

“Guidedogs NI provide an invaluable service to our residents and indeed the whole of Northern Ireland.

“It was an honour to meet with them recently and a pleasure to meet Parker himself, who will make an incredible difference to someone’s life.

“I congratulate Councillor Montgomery for raising an incredible amount for this wonderful charity.”

“We were so grateful for the innovative fundraising events organised by the former Mayor of Antrim and Newtownabbey Borough Council, in what has been a challenging time for charities,” he said.

“ We are also thankful for the generosity of the people and businesses of Antrim and Newtownabbey and we’re delighted the handsome and clever Parker, is doing so well on his journey to become a life-changer.

“It takes £54,800 to support a guide dog from birth to retirement so any money raised by Naming a Puppy is extremely valuable to those we help who are living with vision impairment across Northern Ireland.”

For more information on the Name a Puppy offer, please visit: guidedogs.org.uk/