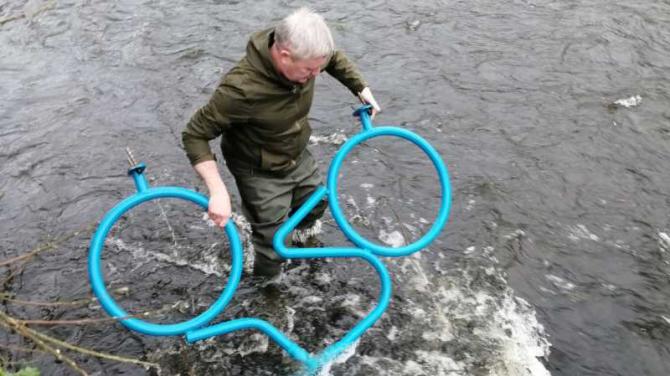 THUGS have ripped up bike stands installed just six months ago as part of a project worth more than £23,000.

In February 2021, approval was given by Antrim and Newtownabbey Borough Council for the installation of bicycle stands at a number of locations in the Borough.

As a result, 125 Bicycle stands were installed throughout 34 different locations at a total cost of £23,430.

The full amount was met from the Department for Communities (DfC) Revitalise fund.

The council itself has made a huge investment into measures to promote healthier lifestyles and sustainable travel.

A report before the Operations committee a year ago said that council has been exploring funding for a number of projects ‘in the context of blue/green infrastructure’.

A number of the locations are part of a proposed Lough Neagh Cycle Way.

Last week, the Antrim Forum stands were targeted by vandals over half term and Ulster Unionist Alderman Paul Michael was forced to don his waders (pictured right) and enter the Six Mile Water to retrieve one of the colourful items after it was dislodged from its mounting and thrown in.

Meanwhile it has also emerged that groups of young people have also been causing trouble at Castle Mall causing disruption and intimidating shoppers.

Mr Michael said: “After a number of calls around the recent vandalism at the outdoor leisure equipment at the Antrim Forum I have met with senior staff and spoken with the Deputy Chief Executive of Council.

“I have been informed that CCTV will be checked.”

Meanwhile, police in Antrim are appealing for information in relation to a fire that occurred on Saturday February 19 at approximately 5am within the vicinity of Tobergill Gardens, Antrim.

Officers are also investigating ‘a serious assault’ that occurred on Friday night at around 7.40pm the vicinity of Railway Street, Antrim.